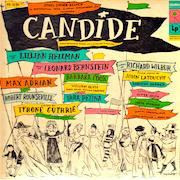 The San Francisco Symphony has laid claim to Leonard Bernstein’s legacy with a season-long centennial celebration. The unsettled case for Bernstein as a great composer, not just conductor or educator, is being made by the orchestra and its director, Michael Tilson Thomas, across six sets of concerts that reflect the mishmash of Bernstein’s compositional output. And the success of this strategy centers around a four-concert run of the composer’s second most-popular work for the stage, Candide.

On the short list of Bernstein’s theatrical works presented in full at Davies Symphony Hall in recent years, Candide follows on the heels of two popular and acclaimed productions — 2016’s On the Town and 2013’s West Side Story. But these were end-of-season affairs, drawing unapologetically on Broadway talent and musical theater conventions. This Candide, at the height of the orchestral year, features a cast of up-and-comers from the opera world: tenor Andrew Stenson in the title role and coloratura Meghan Picerno as Cunegonde.

Such a change in approach is not entirely unexpected. If ever a show played out the tension between opera and musical theater, Candide is it — the work itself, its production history, and then its implications for Bernstein’s musical legacy at large.

As a work of musical theater, Candide is one of a few Broadway shows to have somehow kept its place in the repertoire while being publicly rewritten with a blowtorch. The original 1956 production featured a libretto by Lillian Hellman and was a financial, critical, and commercial failure that, nevertheless, did help further establish Barbara Cook as a Broadway ingenue, a performance that is preserved on an impressive cast recording.

Over the next four decades, the work as a whole gradually engaged more audiences, thanks to a series of directorial overhauls by Hal Prince, who involved, among other collaborators, Hugh Wheeler and Stephen Sondheim. With each pared-down incarnation, Bernstein, uninvolved in the revisions, expressed a general artistic dissatisfaction, believing the intentions of his score should be adhered to as an urtext. But with an ever-expanding list of librettists that reads like the production credits for a pop song, one might have worried less about doing Bernstein justice and more about not completely butchering Voltaire.

Meanwhile, parts of Candide were incorporated into the classical repertoire. The show’s overture, re-orchestrated for the concert hall, became an orchestral standard and a staple of New York Philharmonic (and American youth orchestra) programming. The show’s most famous tune, “Glitter and Be Gay,” is a showcase for vocal virtuosity, the 20th century’s “Queen of the Night aria.” Another recognizable tune, the Mahlerian finale “Make Our Garden Grow,” resonates most successfully when conceived in massive, symphonic terms.

We are at a point where no definitive version of the work exists, although aspects of it have caught on in both popular and classical spheres. Any organization staging a modern production of Candide must reconcile its allegiances and decide on an edition of the book and score accordingly.

In the best of all possible worlds, there would be a better option for the S.F. Symphony to choose than the “Scottish Opera” adaptation, the kitchen-sink edition that the orchestra will use in these performances. Developed in 1988 for its namesake organization, this version reinstates Bernstein’s original score in full, but also includes nearly every revised lyric and conceptual innovation as an amendment. To start with, there are two opening numbers, back to back.

Perhaps this all-encompassing approach is not a surprise either. Bernstein’s larger musical legacy is torn between successful popular works for the theater and earnest attempts at Classical-era forms. He is well-known for the former, which people actually enjoy, but was compelled by the latter, because symphonies, not musicals, were the stuff of masters in his day.

The S.F. Symphony’s Bernstein centennial has it both ways; Bernstein’s lesser-known orchestral contributions are being programmed alongside second-half crowd-pleasers. Candide is an exercise in this juxtaposition, but a work strong enough in itself to stand alone in four symphony-hall performances.

MTT leads the S.F. Symphony and Symphony Chorus, along with a slew of guest artists, including Merola Opera Program Director Sheri Greenawald as The Old Lady, in four concert performances Jan. 18, 19, and 20 at 8 p.m. and Jan. 21 at 2 p.m.

John Mauceri on Bernstein and Beyond

The noted conductor talks about his mentor, colleague, and friend Leonard Bernstein, and about his own adventures on the podium.

The symphony closes out the season with Leonard Bernstein’s comic operetta.