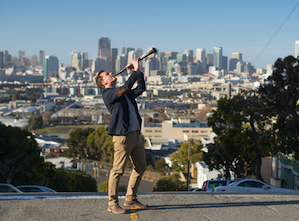 It's not hard to picture Benny Goodman playing intricate arpeggios in a Benjamin Britten score. In 1939 Goodman commissioned the British composer, then living in America, to write a concerto for him. For many reasons, however, Britten never completed the piece in the early 1940s, leaving to the imagination how the jazz clarinetist might have played it.

More than half-century later another British composer, Colin Matthews, reconstructed the work. And on June 4 San Francisco audiences can hear the results of Matthews' efforts when clarinetist Brenden Guy performs Movements for a Clarinet Concerto led by Alasdair Neale. The American West Coast premiere of the 17-minute concerto is part of an all-Britten program honoring the centennial of the composer's birth. The evening at the San Francisco Conservatory of Music is the second offering of Guy's "Curious Flights" concert series of rarely performed music.

Guy first heard Movements not long after its 2008 premiere in London. A year later Guy, then a student, wanted to perform the concerto in a a music competition. He emailed Matthews about the piece. It all seemed a sure thing, but when the score's piano reduction wasn't available for rental, he had to step away from the concerto, hoping to play it one day. Four years later, that day is fast approaching. Later, says Guy, is better than never. "It's only of late that I've managed to put this concert series together and it just happens to be the centennial of Britten," says the Bournemouth native, who now lives in San Francisco. Movements comes with a colorful provenance. It begins in 1939 when Britten and his life partner, the tenor Peter Pears, both pacifists, moved to the United States a few months before the outbreak of war between Britain and Germany. Britten had started on the Goodman concerto commission but had not completed the work before he and Pears decided to return to England in 1942. On the way to the ship, U.S. Customs officials seized Britten's musical sketches on suspicion that they might be coded military secrets, according to biographers of the late composer.

“It's not re-creating Britten — he's reconstructing and re-imagining the movements ... It's not a pastiche; it's all Britten's music.” - Brenden Guy

Months later Britten got the sketches back, but at that point Goodman told him not to rush — he was off building troop morale on tours with his swing band. Britten put the commission on hold until Goodman was available and went to work on other projects, notably on the opera Peter Grimes, a major American commission by the Koussevitzky Music Foundations. The war ended and Goodman went on to many more popular music hits as well as performing a clarinet concerto he commissioned from Aaron Copland in the late 1940s. But Britten and Goodman never revived their concerto, leaving the score to gather dust somewhere in Britten's studio.

Matthews, who assisted Britten from 1972 until the older composer's death in 1976, knew Britten's style well. He decided in 2007 to reconstruct the concerto, using fragments and sketches of the composer's work from approximately the same time period. He began with the one movement that Britten had completed for his clarinet concerto (the molto allegro section). According to published interviews with Matthews, he discovered that Britten's notations were enough for him to complete and orchestrate the movement, including an indication that the soloist should interact with a bass clarinet in the orchestra. Matthews then added two more movements extracted from two other Britten works that were contemporary with the concerto: Mazurka Elegiaca (Op. 23, No. 2 from June-July 1941), and the surviving fragments of Sonata For Orchestra (c. 1941-1942), which, Guy explains, was most likely not intended for the Goodman concerto.

“It's a fine line, Colin himself would say,” says Guy, noting Matthews' intention wasn't for the work to be taken as Britten's clarinet concerto. “It's not re-creating Britten — he's reconstructing and re-imagining the movements. It leaves us with this representation of what Britten may have done had it been completed. It's not a pastiche; it's all Britten's music.”

Critics have agreed. Following Movements' London premiere, they noted how well Matthews was able to keep Britten's compositional voice throughout the work. “We can only imagine what might have been,” says Guy. “Colin has given us a really clear idea of what Britten had intended.”