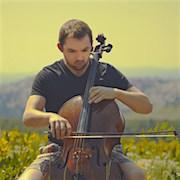 Camaraderie and Democracy at Music in the Vineyards

The New York-based Escher String Quartet kicked off their fifth visit to the Music in the Vineyards Chamber Music Festival this past weekend. The reunion was eagerly appreciated by both hosts and performers, as well as by the audiences who journey up to the gemütlich wineries and performance venues of Napa County for the nearly month-long showcase, now in its 24th season and continuing through August 26th.

For chamber ensembles, it’s “a beautiful place to come to play,” and “unique, in that we do a lot of collaborations outside our quartet,” in the words of Escher Quartet cellist Brook Speltz. To the Festival, Escher brings “something that’s already been lived in for a while…because we’re so in tune with each other’s ideas and movements,” testifies Speltz.

Formed at the Manhattan School of Music in 2005, the Escher Quartet, named for the mind-bending Dutch graphic artist, has participated in residencies under the aegis of Pinchas Zukerman and Itzhak Perlman and at Stony Brook University. They’ve won Avery Fisher and Martin E. Segal awards at Lincoln Center and have toured internationally, along with recording complete cycles of the string music of Felix Mendelssohn and Alexander von Zemlinsky.

Speltz, raised in Southern California and a graduate of Curtis and Juilliard, has also performed as a soloist and recitalist, and in non-classical collaborations. While in rehearsals in Napa, before the Festival’s first weekend, the 31-year-old cellist spoke with SFCV about his career and why he’s happy to be returning to wine country for the third year in a row (Speltz joined Escher in 2015).

How were you scheduled this year, Brook?

Three times in the first week, with August 5th my only performance with the Quartet. The previous two evenings, we were split up in various groups. I’m playing a Beethoven string trio with the second violinist from the Quartet and a violist from the New York Phil, a Brahms sextet with Daria [Adams, violinist and the Festival’s co-artistic director] and a young cellist from the San Francisco Bay Area, and with Spanish songs transcribed for cello and guitar.

And that’s what’s unique about our time here. Usually, at chamber music festivals, we generally play as a quartet only, sometimes joined by a pianist or another string player for a larger piece, but with the core being our quartet. When you play with other people, as in this festival, you have two or three days not just to put together a piece, but to start understanding and anticipating each other’s movements and ideas. In many ways, you actually have to pay more attention, and work even harder and more intensely to come together as a unit, as fast as possible. They’re always wonderful growing opportunities, and of course you’re hearing opinions and feedback from people you don’t ordinarily hear from.

We might play Mozart with a somewhat heavier hand than some groups, with a richer tone, which some people might say is on the old-fashioned side. But I might encounter a musician here, playing a Mozart string trio, who really doesn’t like that much density, [preferring] more lightness and vibrato, faster bow speed, as opposed to fullness of tone. As a result, you learn from each other, and you compromise. Here, things are very democratic.

Where do you suppose the democracy comes from?

I think it’s just the vision of the artistic directors, Michael and Daria [Adams], who have created an atmosphere of friendship, this collective idea of chamber music as a journey a group takes together, and not just one person dictating the way things should go.

Both you and the Escher have wandered outside the chamber. I noted in your bio that you were affiliated with a cello rock band, Break of Reality.

That was a blast. The founder was a counselor at a summer music festival I did in Hudson, Ohio, and I remember him tricking out and arranging Metallica songs for cello. The music was certainly more in the popular realm, but there’s a lot of jazz within cello rock, a lot of improvised stuff I didn’t trust myself with, but it grew with my time in the group. And, of course, the audiences we played for tended to be much younger, and it was a thrill to be able to play for people much closer in age to myself.

And you got to take on Game of Thrones with that group.

The two directors of the band knew how to market themselves. Before the release of the second season [on HBO], we quickly recorded the theme from the opening credits. There was a DJ from Istanbul who had about a million social media followers, and he saw our video and shared it on all his social media platforms. After the first few weeks, we had tens of thousands of viewers, and next you know, it reached a million.

Did it have any lasting effect on your career?

Almost all string players have seen it, and so in that respect it’s funny to meet people and have them say, “Oh, you’re that guy from Game of Thrones”.

And I have no problems with that.

And the Escher had collaborated with jazz singer Kurt Elling and jazz saxophonist Joshua Redman, one of our homeboys, before you joined the quartet.

But about five years before I joined, they were having a rehearsal with Josh, and the previous cellist, my predecessor, had become ill, so they asked me to step in on a rehearsal. It’s still, to this day, one of the most memorable of my musical experiences, not just for the music, but for the outrageous talent and incredible personality that Josh brought to the music-making process.

Did that have a more lasting effect on you?

I was surprised by the technical virtuosity Josh had, the impeccable command of his instrument, which I didn’t always associate with jazz musicians. If you listen to someone like Miles Davis, for example, it’s not about the cleanliness of his playing, it’s about the soul, and the timing. Josh has a sort of virtuosity that reminds me a lot of John Coltrane, incredible training that opens up a world of possibilities of expression. It’s not just the feeling, you also need the ability to evoke that feeling. That was a good lesson for me to remember.

What were your influences growing up?

Both of my parents. My mom, Connie Kupka, is a violinist in the L.A. Chamber Orchestra. My dad, David Speltz, is a professional cellist. He primarily was a recording artist in the studios of Hollywood, doing practically every soundtrack for every major motion picture that was scored in Los Angeles. His first movie was in 1972, the score for The Exorcist [which includes music by Webern and Penderecki].

Your bio says your dad loaned you his 1756 J.C. Gigli cello.

The one I’m actually playing now is the other one he owns, which is from the 1850s, by the great French master Jean-Baptiste Vuillaume.

So you’ve borrowed both. What’s the difference?

The Vuillaume has the stronger punch, as far as the ability to project, particularly in larger halls. Since I joined the Quartet, I’ve found the need to fill out a hall much more often than I used to. The Gigli has the warmest, most beautiful tone, the sound feels more like a hug, as opposed to a shout.

Nicely put. What does your father think about your current status?

I know he’s incredibly thrilled for the opportunities I’ve managed to have. The string quartet has always tended to be the Everest of music-making in our family, so for him to see me touring and performing, with the incredible colleagues that I have, I know makes both of them very happy.

Will they be seeing you up here?

They’re actually about two hours and 20 minutes away right now, on Route 5.

What have the audiences been like for you at this festival?

The people who come to the concerts here, as opposed to other capitals of the music world, come in order to enjoy and listen, which is very pleasant to notice, and less so to criticize. In many ways, you know that you’re playing for a friendly audience. Even before I joined it, the Quartet had established a relationship of trust with the audience and the music directors here.

And what about the settings?

This is the only place in the world where we regularly play in wineries. And every winery offers a very unique, different setting. There’s one with a stage back in a cave, where you’re sitting under a mountain [Clos Pegase]. There’s another where you’re in a beautiful barn [Frog’s Leap]. The beauty of the concert locations is really a wonderful thing.

Barreled Over: Pure Delight at Music In the Vineyards

A performance by  the Ortelius Trio — Joshua Roman, Dale Barltrop, and Victor Asuncion — at Markham Vineyards is distinct, memorable, and completely delightful, aided by impeccable acoustics.

Bouncing Between Baroque and Contemporary at Music in the Vineyards

New music and old mixed together in a concert that showed how a balanced playlist can refresh the ears.