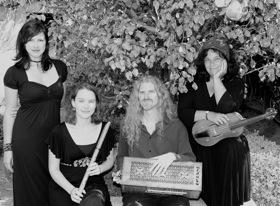 Chelsea Nicole Spangler on October 26, 2009
For classical music aficionados, the term early music generally brings to mind only works that they might hear in a Western concert hall. But Cançonièr adopts a much broader view for its upcoming concert (its debut as ensemble-in-residence at MusicSources), incorporating a Dufay motet, Turkish classical music, Italian and German dances, Balkan folk songs, and more. The unifying theme for the program is both unexpected and seasonally appropriate: “The Black Dragon: Music From the Time of Vlad Dracula.”

One of Cançonièr’s founders, Tim Rayborn, admits that little is known about Dracula’s musical tastes. It is, however, possible to speculate about what music he might have heard. Dracula (ca. 1431-1476) ruled a small Balkan nation in what is now part of southern Romania, so Byzantine court music and Balkan folk music were probably familiar to him. He certainly had plenty of contact with the Turks, as well, though he may have been less interested in hearing their music than impaling them on wooden spikes.

To begin and end the concert, Cançonièr will perform excerpts from a poem called “Story of a Bloodthirsty Madman Called Dracula of Wallachia,” written during Dracula’s lifetime by the German poet and musician Michel Beheim. Although the poem was performed for court audiences in its day, none of the original music survives. For this concert, Rayborn has set the text to music from a German source originating around the same time as the poem. Additionally, a spoken performance of an English translation will ensure that the audience doesn’t miss out on the gory details that made Dracula’s reputation spread so widely.

Another German composer with whom Dracula may have been familiar is Oswald von Wolkenstein (1376?-1445), a member of the chivalric Order of the Dragon, the same sect that inspired the Dracula name. Vlad the Impaler’s father was a member of the order, and called himself “Dracul,” or dragon. Dracula literally means “Son of the Dragon.” Members of the order were committed to fighting the Turks and preventing the growth of the Ottoman Empire.

Cançonièr won’t be taking sides; the program also allots plenty of airtime to music of the draconian order’s enemies. Folk songs from Hungary, Transylvania, Moldavia, and Bulgaria will be performed. Rayborn describes the melodies as “reminiscent of medieval modal songs.” The songs come from oral traditions that may have been transmitted, person by person, from Dracula’s time to ours. The surviving songs are thus not exactly the same as they were centuries ago, but, Rayborn elaborates, “if these exact songs did not exist in the 15th century, ones similar to them likely did.”

The variety of music that Cançonièr will present on this “Black Dragon” program is meant to satisfy the tastes of any music lover, from early-music buffs to world-music fans, as well as to goth enthusiasts who might be drawn ineluctably to the subject matter. Anyone with an ear for seldom-heard instruments will also be interested in this concert; Cançonièr’s four musicians will demonstrate their talents on the expected Western early-music instruments (recorders, vielle, lute, psaltery), as well as hurdy-gurdy, oud, hand drums, and tromba marina, which Rayborn calls “a completely ridiculous instrument that you will have to see and hear to believe.”

“The Black Dragon” promises to be a fascinating concert, with something for everyone to sink their teeth into.