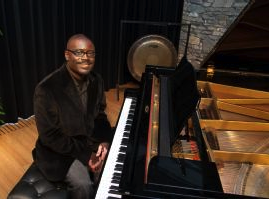 It’s a short drive from composer John Wineglass’ family home in Monterey to the site of the Carmel Bach Festival, where he’ll be leading an informal discussion this Thursday. And it won’t be that much of a stretch, he hopes, for his audience to grasp the connection between the legacy of the Baroque master and contemporary musical forms outside the concert hall.

“One of the things I learned early on, in undergrad [at American University, in his hometown of Washington, D.C.], was counterpoint, of which Bach is the master,” Wineglass recounts. “And where it comes to current music, it’s different ways of saying things, and that’s counterpoint. That’s what makes Bach hip to me.”

Just how hip Bach can be has become more apparent to the 40-year-old composer through a series of seemingly unconnected recent revelations. An Emmy-nominated creator of music for TV and film, Wineglass made a presentation at last year’s festival on the vital presence in movie scores of classical music, including the Bach canon. Then, during the lead-up to the annual Grammy Awards, Wineglass noticed that several of his classically trained colleagues were scheduled to appear with pop icon and actor Justin Timberlake. “So I called them up and said, ‘OK, guys, why?,’ and they said, ‘You should really listen to his album.’ I bought it at Starbucks, and listened to it, and I was blown away: He had a theme and variations in all his songs!”

In the past several years, Wineglass, who is African-American, has been invited to showcase classical music for underprivileged youth, including those at Monterey County’s Rancho Cielo, where the Carmel Bach Festival sponsors an outreach program. “Instead of looking at differences, which people often do, I bridge the gap by talking about similarities,” says Wineglass. “I opened a class up with a reference to 50 Cent [rapper Curtis James Jackson III], saying, ‘What does he have to do with Bach?’ The kids looked at me like, ‘Nothing at all!’ But there’s one of his songs, called In the Club, where he has an ostinating pattern, typical of most rap music. And I compared that to a passacaglia, because it goes throughout the whole tune. When you look at Bach’s Prelude No. 1, you can see the similarities.

“What’s unusual about this year’s festival, never been done before and never will be done again, is the mix of Bach, French music, and jazz.” –Stephen Prutsman

“Then there’s the retrograde inversion” employed by Bach, Wineglass continues, “and in ProTools [a digital audio program], you can take a sample and reverse it and turn it upside down, which is common practice in hip-hop. So it’s taking these terms and bringing them together and having a discussion on it.”

Wineglass reaped some payback from his time with the at-risk kids, using their poetry as the inspiration for his work Someone Else’s Child, premiered at last year’s Cabrillo Festival of Contemporary Music. “It has myriad sections of polyrhythms,” says the composer, “and I learned that from Bach.”

Composer and pianist Stephen Prutsman, 53, will be presenting a pair of études at Carmel Bach this year, with his own sort of genre-bonding. “My melismatic writing, I think, comes from both [jazz bebop founder] Charlie Parker and from Johann Sebastian,” says the San Francisco–based Prutsman. “One of the pieces has a lot of contrapuntal writing, it’s a set of variations, and the other is a passacaglia, which is a very old form, though it’s all jazz-language–based. I’ve studied so much of Bach’s music, it can’t help but be an influence.”

“Papa Bach really was the usher into the Baroque era from the Renaissance. … Single-handedly, he introduced us to a music language that has carried us to the present day.” –Prutsman

Prutsman will also conduct two concertos, a week apart, one by Bach and the other by his youngest son, Johann Christian. With the performance of Bach’s French Suite, there will be still more cross-pollination. “Between each of the Suite’s movements, I’ll play a piece of French music,” says Prutsman. “What’s unusual about this year’s festival, never been done before and never will be done again, is the mix of Bach, French music, and jazz. If you want to explore the relation between Bach and bebop, one clear common thread is the delight in ornamentation, not to mention those great long melismatic lines that meander hither and thither. That’s as opposed to the more-compact four-bar structures that you find, starting with Johann Christian Bach, which led to Haydn and Mozart, and are much more from the Italian tradition of singable phrases.” The inclusion of Darius Milhaud’s La Création du monde on the festival program will provide a unique example of “a fugue written in blues style by a French composer, all three coming to form,” Prutsman points out.

Prutsman and Wineglass are willing witnesses to the staying power of the festival’s namesake. “Papa Bach really was the usher into the Baroque era from the Renaissance,” Prutsman reminds us. “Single-handedly, he introduced us to a music language that has carried us to the present day, our way of hearing tonality. Part of that was, he was born at the right time. Part was the introduction of the well-tempered tuning system, the development of musical structure, and the opportunities to write for all these various ensembles that came his way. And the amount of music he wrote, through necessity. Had he been born with a silver spoon in his mouth, he wouldn’t have been as productive.

“But it’s also because his music comes from a source much greater than us. It’s cosmic.”