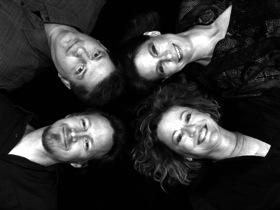 This is not your grandmother’s chamber music.

Sure, there are some similarities. When the Double Duo, the newest chamber music grouping of the Paul Dresher Ensemble, takes the stage at Old First Concerts on June 4 and 6, you’ll see a violin, played by virtuoso Karen Bentley Pollick, and a piano, played by Lisa Moore, a longtime contemporary music soloist and founding member of the Bang on a Can All Stars. And you’ll be hearing pieces composed within the parameters of chamber music, with the musicians playing the notes that are on the page.

If you aren’t familiar with the quadrachord and the marimba lumina, this is a great opportunity to hear both of these beautiful instruments, which were designed to allow the musicians to explore multiple layers of sound during a performance. Paul Dresher invented the quadrachord, in collaboration with instrument designer Daniel Schmidt. It somewhat resembles a giant electric bass, though with 14-foot-long strings (about 50 percent longer than piano strings) and an electric bass pickup placed next to each of the two bridges.

It’s an incredibly versatile instrument. Because of its low open string/fundamental pitches, the instrument is ideal for exploring various resonances, timbres, intervals between pitches, and alternative tuning systems. The instrument, says Dresher, can be “plucked like a guitar, bowed like a cello or violin, played like a slide guitar, prepared like a piano, and hammered on like a percussion instrument.” It’s also large enough to be played by two people at once, and Davel will join him on one piece, Dresher’s Glimpsed From Afar. With one person, the performance is very physical; with two, it becomes a choreographic as well as musical experience. “It’s not quite dance,” says Dresher, but it’s definitely an instrument worth seeing and hearing.

As for the marimba lumina, which was designed by synthesizer pioneer Don Buchla, along with Joel Davel and Mark Goldstein, it’s based somewhat on its acoustic namesake, and is essentially an electronic MIDI controller that’s played with mallets. It resembles an electronic keyboard, but has considerably more expressiveness. The mallets can be tuned to create different sounds, such as chimes, vibes, and bells, which can then be played at once. The electronic bars, or keys, can also be manipulated by sliding along their length, allowing changes in sounds, volume, pitch, and timbre. It is, as Dresher says, “a very expressive instrument.”

The program not only highlights the instruments and the musicians’ talents, it also offers a chance to hear both established and upcoming contemporary composers. There will be pieces by Dresher, along with recent work by longtime contemporary composer Martin Bresnick and a piece by up-and-coming composer Sam Adams (John Adams’ son) composed specifically for Bentley Pollick. All in all, these concerts promise to be exciting, surprising, and refreshing — a chance to hear contemporary classical music at its best.