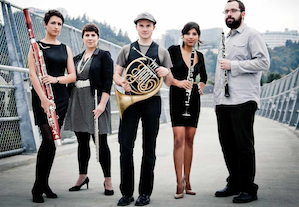 City of Tomorrow: Breathing New Life Into the Wind Quintet

In the world of chamber music, string quartets seize the spotlight — and the bulk of the bookings. With so many masterpieces in that genre, starting with Haydn through Beethoven, Bartók, Shostakovich, and more, and so many prominent string foursomes, from the Emersons through Kronos and many others dominating the international touring circuit, it’s difficult for similar small instrumental aggregations to make headway. And because there are so many more string quartets than other ensembles performing and commissioning new works, composers naturally tend to write for them, creating a self-reinforcing cycle of string hegemony.

A new wind quintet, City of Tomorrow, which performs at Old First Church on March 15, aims to challenge the string quartet’s supremacy. Along with a few other woodwind fivesomes like Imani Winds, the young group (members range in age between 26 and 31) is bringing to light rarely heard chamber masterpieces, while encouraging the creation of more.

Star had moved from his hometown of Portland to begin undergraduate studies at the Conservatory’s dowdy but comfortable original location in 2004. “I started out in the old building, this old, falling-down monastery, right when I was just getting into what it meant to be a skilled performer,” he recalls. “In my last year, we moved to the new building, so moving into this more polished space went along with my own personal journey. I was having a gender transition, as well. So it was a transitional time in my life, and the school reflected that.”

City of Tomorrow was the first wind quintet in a decade to snag the top prize at the prestigious Fischoff Competition.

He met Blatchford in the Conservatory’s new-music ensemble, performing a Schoenberg work. The Mendocino County native studied at the Conservatory with renowned flutist Tim Day (appointed SFSO principal flute in 2006), learning a great deal about the professional orchestral world as her teacher shared with the students his audition process for the San Francisco Symphony, whose performances she attended often. (He also shared his old flute, which she plays today.) She also performed in various groups — including a wind quintet that was featured at a recital at the Kennedy Center. “That gave me a taste for new-music wind quintet repertoire, and it showed me how a wind quintet could sound in a contemporary scenario,” she recalls. They were coached by Nicole Paiement, and Blatchford played in Paiement’s Ensemble Parallèle (recently renamed Opera Parallèle), which resulted in her playing Lou Harrison’s own ocarina in their 2007 production of the composer’s opera Young Caesar at Yerba Buena Center.

After completing their SFCM studies, Star and Blatchford wound up in Chicago for Star’s grad study at Northwestern, where he met Nogal and formed City of Tomorrow, choosing the name from a Billy Collins poem that meditated on the vision of an ultramodern future utopia found in mid-20th-century speculative fiction, art, and architecture.

“We see much of the music we play as being the composer’s ideas about what music of the future is going to sound like,” Star explains. “A particular line that we love from the poem is: ‘It might not be a city at all but a vaporous landscape, the valleys all flooded with the dolorous chords of unwritten songs, the mountain tops cold and forbidding, waiting for the climbers of the future to seek them out.’”

They sent a recording of those and other 20th-century wind quintet works to the Fischoff Competition — the largest chamber music competition in the world. Previous winners include Joshua Bell, eighth blackbird, Cypress Quartet, Imani Winds, Pacifica Quartet, and many of the other most prominent rising chamber ensembles. In the competition for the 12 ensembles selected to perform at the University of Notre Dame, the group competed against saxophone quartets, brass quintets, and other aggregations. Only a year out of grad school, they were surprised to make the first cut, and even more surprised to triumph in the semifinals and then the finals — the first wind quintet in a decade to snag the top prize. “They put medals around our necks, and we had 20 minutes to perform again in the gold medal winners’ ‘victory lap,’” Nogal remembers. “It was an intense and memorable moment.”

Scattered to the Four Winds

By the time of their Fischoff win, the group had already scattered to the four points of the compass, with only Nogal remaining in Chicago. Blatchford and Star had already rented a truck to ship their lives back to Star’s hometown of Portland. The other members live in New York City and San Antonio. Their geographic dispersion makes it challenging to maintain a career, since they’re one of only a few nationally touring wind ensembles. “It is unusual, but at this point, thanks to technology, it’s less of a problem than it would have been years ago,” Nogal explains, noting that rock bands like the aptly named Postal Service have sustained similar long-distance relationships by sending recordings back and forth via Bandcamp, e-mail, and the like. “I would encourage musicians to not let geographical boundaries keep them from playing with the people they want to play with,” he says.

“The wind sound is so fascinating and symphonic, we think it deserves a lot more attention from composers. The wind idiom is more vivid, in your face.” –Andrew Nogal

Their physical separation does make it hard to squeeze in time to rehearse, but it also means “that all the ideas we have have to be big, because just to bring us together requires so much time and energy and money, that we’re not going to get together to do weddings,” Nogal remarks. “We’re about substantial artistic projects.”

Such projects include building “a future repertoire that would expand the map of wind quintet music,” Nogal says, which, since its 19th-century heyday of Reicha and Danzi, has been limited to a handful of major works by well-known composers, including Holst, Barber, Milhaud, and today’s leading winds composer, David Maslanka of Montana.

But why no American works? “American composers have shied away from the wind quintet,” Nogal explains. “It’s a demanding set of instruments to write for.” For example, the breath limitations (especially for the horn) make wind bands ill suited for minimalism. And what he calls the “fetish for uniformity in sound in so much new music written today” poses an obstacle to any wind quintet’s diverse colors. “Composers are taking harmonic and gestural language from what string players can do — glissando, flotando, and so on — and that puts wind instruments at a disadvantage,” Nogal explains.

Still, he’s surprised that more new music isn’t available for the ensemble, compared to string quartets or the so-called “Pierrot ensemble” of groups like eighth blackbird, which omits the oboe and bassoon. “The wind sound is so fascinating and symphonic, we think it deserves a lot more attention from composers,” he says. “The wind idiom is more vivid, in your face. There’s a real immediacy to the sound of wind instruments. You have five different colors to choose from, and combinations of instruments that are interesting and unusual.”

The group is already plotting collaborations with pianists and string players, and so far has turned in a performance of a complete Radiohead album with the Portland Cello Project. “Even if a composer doesn’t write specifically for quintet, we hope that we can inspire richer possibilities for mixed ensemble and orchestral writing,” Nogal says. “It’s a harder sell,” he acknowledges. “It’s not as predictable or as easy to quantify as a string quartet. But we’re trying to change that.” March 12, 7:30 p.m., Master Class at San Francisco Conservatory of Music, Osher Salon 50 Oak St., S.F. Event is free and open to the public. www.sfcm.edu