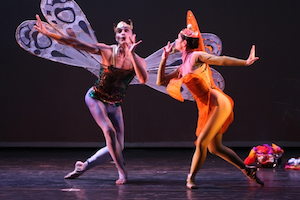 The way choreographer Carlos Fittante tells it, there’s a link between Balinese and Baroque music and dance. “They’re both court traditions, rhythmically complex in beats and notes, and both are expressive in a detailed way,” the New York–based Fittante says in a telephone interview. Voices of Music will feature works by Fittante and collaborators in the debut of its newly created San Francisco Baroque Dance Ensemble. In interludes between the dance pieces, the early-music group will play compositions to which Louis XIV twinkled his pale-silk-covered toes.

Voices of Music cofounders Hanneke van Proosdij and David Tayler created the group’s movement component as a way to bring more Baroque dance to San Francisco. “The idea is to present different choreographers,” van Proosdij explains. “We believe Baroque dance and music are meant to be together, and we think it’s really important for 21st-century audiences to experience that.”

Fans of Fittante’s work, Tayler and van Proosdij chose four pieces to present, two of which incorporated a heady fusion of contemporary ballet, Balinese movement, and Baroque and gamelan music. But there was an unusual twist to their selection: They wanted the two fusion pieces rescored to Baroque music only for the upcoming Bay Area performances.

“We believe Baroque dance and music are meant to be together.” – Hanneke van Proosdij

Tigerlily and the Dragonfly, a duet choreographed by the late Islene Pinder and Fittante, and danced by Fittante and ballerina Robin Gilbert, was originally performed to a gamelan score. It’s now set to a mashup of sections from Georg Philipp Telemann’s Overture Burlesque with Jean-Philippe Rameau’s Dardanus.

Antonio Vivaldi’s Concerto for Sopranino Recorder and Strings remains part of the original score for Eden’s Mandala, another fusion duet choreographed by Pinder and Fittante that he and Gilbert will perform. “Winter,” from the composer’s Four Seasons, however, replaces the original lush Brazilian music of the duet’s second half.

The musical switch-outs didn’t change the essence of both dances, according to the ballet-trained Fittante, who also studied dance in Bali. “Through the choreography, you can feel the sensuality of the music breaking the veneer of Baroque refinement,” he reports. That said, he adds, “The crispness of Balinese movement had to soften to the curviness of Baroque music.”

In addition to the two fusion pieces, Fittante will perform a solo in full period costume to Jean-Baptiste Lully’s Chaconne de Phaeton. Fittante reconstructed the complex 18th-century choreography of Louis Pecour from the Feuillet system of Baroque dance notation. “The step pattern is coming from a score, and there’s an elasticity in reading the notation in terms of when to rise, when to spring, but it’s my interpretation of the movements,” he notes. Gilbert will also join Fittante in full period costume to perform his Baroque movement-only follia to music by Vivaldi that incorporates early Spanish dance.

Masks play a role in both Baroque and Balinese dance traditions, and Fittante incorporates their use in two of the works to be performed: Eden’s Mandala and the Baroque movement-only dance duet. “Masks are a convention both in society and theater,” he says. “They allow you to be an archetype … and they make you anonymous!”

The musicians, though, will be more than recognizable. Joining van Proosdij on recorder and harpsichord will be Carla Moore and Maxine Nemerovski on Baroque violin; Kati Kyme on Baroque violin and viola; Lisa Grodin on Baroque viola; Elisabeth Reed on viola da gamba; Bill Skeen on cello and violone; and David Tayler on archlute. They’ll play an anonymous arrangement of two Rameau works — his 15th and 16th Concerts for Sextet. “We’re keeping the music French,” says van Proosdij, “as it would have been performed at the Court of Versailles.”