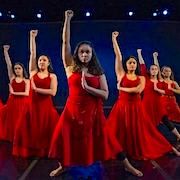 Conversations about rising rents, gentrification, and artists and arts organizations caught in the crosshairs and forced to relocate have become so commonplace as to risk being labeled endless or boring. Thankfully, importantly, vanguard mavericks are changing the dialogue. Sure, they’re still on the move, but where they land and the structure of their long-term solutions increasingly boil down to two words: partnership and ownership.

Dance Mission Theater provides a mighty example. From its origins in 1975 as Wallflower Order, the nation’s first feminist modern-dance company, founder/choreographer Krissy Keefer sought existence leading an artist-driven, feminist collective. Becoming Dance Brigade in 1984, the company’s feminist activism expanded to address social issues including race, poverty, war, spirituality, and more. In 1998, based on the strength and popularity of cofounders Nina Fichter’s and Keefer’s Dance Brigade, Dance Mission Theater established a home and a mission to build community, promote inclusivity, and create a peaceful world, among other aspirations.

If radical inclusivity and strong community connections paid the rent, it’s not inconceivable that Dance Mission, this year celebrating a 20th anniversary, would drive its stakes deep into the soil and spin in place for decades into the future.

But — forgive a divergence into the commonplace — the perpetual threat of rising rent to the organization’s ongoing stability has changed everything. Keefer in an interview is plain spoken. “We wanted to get a site where we have control for another 20 years. We couldn’t assume or rely on rent stabilizing where we currently are. The insecurity of that had us looking around to buy a building. It’s a heartbreak to move because this space has been a place for dance since 1995, when I first came here.”

Across from BART, centered in the Mission District’s crossroad of theaters, galleries, arts groups, social justice activities, and culture, Keefer calls the area “the Left Bank, like it was in France.” To depart an atmosphere that reflects the bones of the revolutionary, intellectually sharp dance theater would destroy environmental synthesis, she says

Asked why synergy matters, especially in the field of dance, Keefer says, “I consider myself a cultural worker. We were the first self-described feminist dance group. We helped break open the discussion of what dance is. What are women’s bodies in dance? Who gets paid to perform? In the 1990s, the ballet world was mostly white and exceedingly anorexic dancers. When women went to see a show, who did they see on stage to relate to? I wanted a culture that reflected back what people are. Take Alvin Ailey, that’s why he was so vital: Who better to speak to the realities of black people in the ’60s?”

To find and establish a permanent home in a building owned by Dance Mission, and therefore immune to gentrification, was impossible to do alone. That is why the solution and future plans that will be announced at ¡Adelante!, a one-night performance on Nov. 8 at Herbst Theater, are not just celebration, but aim to make a statement.

With the investment of three nonprofits, Dance Mission Theater, Mission Neighborhood Centers, and Mission Economic Development Agency (MEDA), Keefer anticipates breaking ground in December 2021 at a new property at 18th and Mission, just a few blocks from the current home. “There’s an unspoken agreement that my current landlord will host us until we move into the new building in June of 2023.”

The new “forever home” will expand Dance Mission’s classes, artist residencies, performances, and programs with the addition of a fourth studio and for the first time in its history, a fully ADA compliant, accessible venue.

“That’s a primary motivator. Part of our whole mission is providing access,” Keefer says. “We do a deaf dance festival and more. My audience has a huge sector of women in their 60s, and they have mobility issues, some of them. Now they will be able to participate.”

“Our weakness can be that we have so many programs that we lack cohesiveness,” she admits. “Having ownership of a building will cause us to hone our mission, without collapsing us into an institutional mindset. The multifaceted aspect is what makes us successful. You know, the bigger you get, you can get separated from your audience and community. Now, you can walk in and talk to us without an appointment. We want to maintain that access.”

About other artists or arts organizations finding solutions for the crisis of relocation, Keefer does not see the arts community mobilizing as a unit. “The tech takeover is just so cemented in our culture, people accept it and find personal solutions.”

Nevertheless, the next wave of mavericks, Keefer rising among them, serve on task forces, launch arts advocacy campaigns, or become members of grassroots community groups like Calle 24 (formerly The Lower 24th Street Merchants and Neighbors Association), a group of long-time residents, merchants, service providers, and art organizations who preserve, enhance, and advocate for Latino culture in the greater Mission District neighborhood.

Keefer concludes the conversation with a determined statement and acknowledgement of the 12 million dollars Dance Mission is now tasked to raise. “The overlapping community that finds purpose and gets along — that’s what makes a sense of home and wellbeing. We all need a space where we feel safe, especially in these times when gentrification causes anxiety, fear, and actual physical illness. At the Herbst, we’ll celebrate 20 years, band together — then we’ll go out and raise money. It definitely isn’t going to happen without the community’s support.”

In Search of Duende: Flamenco in Southern California

A full slate of upcoming concerts reveals a flourishing scene for the passionate art form.

The company’s artistic director completes her large-canvas, Afro-futurism trilogy, in a four-performance lineup.