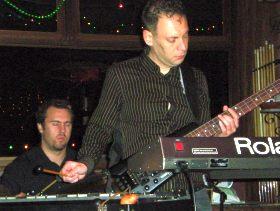 Brian Gleeson on August 21, 2009
One of the great benefits of living in the Bay Area is the opportunity to tap into its vibrant new-music scene. This movable feast of experimental music seems to be fueled by an unending parade of gifted composers and performers who have spent their lives redefining musical boundaries.

Classical and film composer Jack Curtis Dubowsky is truly one of these San Francisco sonic explorers. Dubowsky has composed four chamber operas and scored five feature films, including That Man Peter Berlin, Rock Haven, and Redwoods. In addition to work as a conductor, educator, writer, and filmmaker, he leads the Jack Curtis Dubowsky Ensemble, a new-music quartet that combines acoustic instruments with an analog synthesizer, electronic hardware, composed material, and structured improvisation.

The ensemble’s music can be described as free-form and transcendental; it’s recorded live, without overdubs or sequencing. While comparisons of this sort are often odious, I might think of it as “the Philip Glass Ensemble meets John Zorn,” with a healthy dose of Ornette Coleman thrown in for good measure. In addition to Dubowsky on bass and synthesizer, the ensemble includes percussionists Erika Johnson and Fred Morgan, plus trombonist Hall Goff.

The Dubowsky Ensemble’s performance on Sept. 9 at Meridian Gallery will also use sounds and music to influence video projected by the gallery’s sophisticated multimedia system. The date begins the 11th season of the gallery’s series, which presents monthly performances by Bay Area musicians of experimental music in a variety of idioms and compositional processes.

Up next for “Meridian Music” will be Doctor Bob on Oct. 14. The duo is composed of Bob Marsh, on processed cello and voice, and David Michalak, who plays processed lap steel guitar and Skatchbox. Marsh is a seasoned improviser, whose work involves shaping sounds, words, and images to create evocative soundscapes.

The Joys of Musical Education