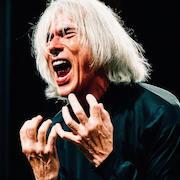 A low rumble rolling off the tongue of Dutch composer Jaap Blonk or a “rackete rinnzeke” rattling from his jaw may be your first clue you’re in for something exquisite and unusual at Other Minds Festival 23.

Delving into text and speech as a musical medium over the course of six days, Sound Poetry: The Wages of Syntax features live and archival performances by artists whose work often blends vocal expression with electronic manipulation, electroacoustic instrumentation, and other musical layering or multigenre collaborative approaches. Tapping into the spirit of international poetry festivals of the 1970s and ’80s, luminaries of the era still working in the field appear alongside the newest voices on the experimental music scene.

New York City-based composer/poet and EAR Magazine co-founder Beth Anderson writes in an email about the festival’s theme and her love for investigating the granularity and wholeness of language. Music and words, she says, “are always just inside out of each other.” Fond of unfamiliar textures and combinations, Anderson has applied her interest in transformational sound — she refers to one project involving coded text interpolated into pitches as “painting into words and phonemes” — to compositions in a wide range of media.

Likewise, composer/performer Pamela Z has made her mark in the Bay Area and beyond with voice-focused work combining melody with spoken word or poetry, electronic processing, and sampling. She is encouraged by an increased acceptance and awareness of unconventional composition techniques, an evolution she attributes to the internet and alternative media. “New people are finding their way into our genres because information is so much more easily disseminated these days,” she says.

Taken together, the two composers indicate the festival’s broad range. Anderson and Z appear in the festival’s closing night event, Ink Conclusion, along with other artists.

Throughout the programs, audiences will find the history of late 20th-century poetry and new music on display in combination with the most recent sound innovations and new voices from Europe and the Bay Area — all given a vital, human touch through live, intimate artist-audience interactions. The festival includes, among other things, a rare appearance by poet/feminist/activist Anne Waldman; a lecture on the history of sound poetry by Italian sound poet Enzo Minarelli; a “No, Poets Don’t Own Words” workshop revealing Blonk’s techniques; and Beat poet Michael McClure’s rendering his Ghost Tantras.

Asked to describe the works she will bring to the festival, Anderson shared a detailed preview. If I Were a Poet (1975) is an in-the-beginning-was-the-word source piece, she says. “What would I say, if I were a poet? Text-sound is the use of words and phonemes to make a kind of percussive vocal music.” After moving to California from New York (she has since returned to the East Coast) and finding the level of aggression troubling, Anderson composed I Can’t Stand It (1976), which she will perform “because everyone loves a rant!”

Other works speak to pieces she chose for personal connections to friends, family, or the natural world. Killdeer and Chicory (2005) bears shades of mortality: “Killdeer are little brown birds. They fly along in front of your car on sunny country roads. They swoop down and light on the road right in front of you. They seem to get away, but you are never sure if you have killed them, if the ones flying ahead of you are the original birds or their friends.” Another work, Ocean Motion Mildew Mind (1979), she suggests, is a noisy piece about silence. “The first letter of each word in the title spells Ommm. Aside from the title, the piece is a kind of homage to punk rock and CBGB.”

Pamela Z brings four works for solo voice and electronics and one piece written for two strings, two brass instruments, and tape. Written over a span from 1986 to 2018, they include live text, sample speech fragments, and Z’s dramatic gestural vocabulary and coloratura soprano range. “A few of the works involve a technique I’m quite fond of these days whereby I compose melodic material derived from transcribing the pitches and rhythmic material found in the speech sounds I have sampled,” she says. “Also, on a separate evening, I’ll be part of the speaking chamber chorus performing works by Ernst Toch, including the famed Geographical Fugue.”

A quick scan of the roughly 20 artists appearing at the festival shows women composers well represented. Asked whether, in addition to an increase in opportunities to present experimental music, she sees more opportunities for women composers in general, Z offers a cup-still-only-half-full reply. “There’s been a steady change over the years in the level of respect afforded to women composers (and conductors, and players for that matter.) We still have a long way to go, but representation has certainly improved by leaps and bounds during my years working in music.”

Correction: As originally published, this article identified Pamela Z as coloratura contralto, based on information published in the publicity about her performance at Other Minds 23. She is, in fact, a soprano with a very wide range.

The DIY Generation at Other Minds

For first-generation electronic musicians like Don Buchla and John Bischoff, creating or remaking electronics as instruments is part of their creativity. This month they’re being celebrated at Other Minds New Music Festival.

Nancarrow's Genius Celebrated by Other Minds

Sponsored by Other Minds and a team of organizations including Cal Performances, the concerts celebrating Conlon Nancarrow's 100th at UC Berkeley’s Hertz Hall were a scene of fascination.