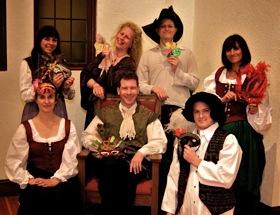 Jaime Robles on February 23, 2010
In March, San Francisco Renaissance Voices presents its initial concert (titled “Songs of War and Peace”) in a series of three programs that present music inspired by war. Performances begin at San Francisco’s Seventh Avenue Performance on March 6, then move to Palo Alto on March 7 and Alameda on March 14.

According to Music Director Todd Jolly, there was no shortage of music about war to be found when the group’s creative team of Jolly, Executive Director J. Jeff Badger, and Assistant Music Director Katherine McKee put together their provocative and inventive series, “Music in Time of War.”

“We hear about the guys doing the bombing raids over Iraq, listening to music that pumps them up over their headphones,” Jolly explains. “And we certainly know the importance of music to the Vietnam War protest and in the civil rights movement. Apparently it was no less important back in the Renaissance.”

The centerpiece of the concert is Tomás Luis de Victoria’s nine-voice Missa pro victoria (dated 1600). The piece uses 18 members: six sopranos and four in each of the other sections, for its two choirs mixing a total of nine vocal parts. The work is richly textured, the multiple parts creating a profusion of overtones. “The overtones are just glorious,” Jolly enthuses. “It’s always exciting to do something that is nine parts.”

“The Victoria is not what you would anticipate from most Masses of the day,” Jolly adds. “It has a much faster tempo; it’s much lighter in feel.” It also uses a variety of vocal sound effects. A parody of a secular work, La Battaille de Marignan (known as “La guerre”) by Clement Janequin, which celebrates a French victory in 1515, Victoria’s Mass is full of the sounds of war — the singers’ voices re-creating the ringing clash of swords, the resonant explosions of cannons, and the cries of warriors in both victory and pain. Jolly confesses to having mixed feelings about the music’s portrayal of war but affirms “it’s music that for its own sake deserves to be performed.” He adds that the work is “quite fun to perform and to listen to.”

The program includes a variety of musical groupings, from quintet to soloist, as well as a range of musical styles, including that of Guillaume Dufay’s Lamentio sanctae matris ecclesiae constantinopolitanae (The fall of Constantinople), which is a four-voice chanson-motet.

Jolly loves the singers he works with, saying, “They are amazing. I can put anything in front of them and they will sing it.” San Francisco Renaissance Voices includes singers from some of the finer choruses in the Bay Area: San Francisco Opera Chorus, San Francisco Symphony Chorus, Philharmonia Baroque, and the American Bach Singers, to name a few. Among the singers are both specialists with a passion for Renaissance music and younger professional singers with an interest in the genre.

Troubadour songs comprise the shorter pieces on the program. Soprano Rita Lilly, who also sings with the American Bach Soloists, will be performing Bernart de Ventadorn’s lovely Quan vei la lauzeta mover (When I see the lark beat his wings), with one lyric reading: “Alas, I thought I knew so much about love,/and really I know so little.” Although the listener might readily place these works in the category of peace, they are also linked with war. “Singing troubadour songs was part of the training that military personnel went through,” Jolly relates. This was a practice that made emotional sense, since both courtly love and war ask the participant for fidelity unto death.

Celtic harpist Diana Rowan accompanies the group on several pieces. “We work with her every chance we get,” says Jolly. “She is such an incredible accompanist and a fine soloist.” Peter Jaques also accompanies on the ney, a sort of Turkish recorder. And Jolly, himself a percussionist, joins the musical fray for the Turkish songs, playing a selection of instruments including a modern version of the field drum.

“Our history and culture have a lot to say about war and may open our eyes a bit to the fact that this is an age-old problem,” Jolly concludes. “The crusades maybe weren’t the best thing, so why are we doing it again? ... We really haven’t resolved anything in all these hundreds of years.”

Whatever political dimension may or may not exist in San Francisco Renaissance Voices’ thought-provoking look at music and war, the upcoming concert series is sure to be filled with splendid music, superbly sung, and a delight for any music lover.