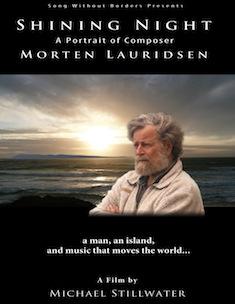 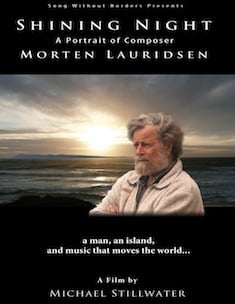 Michael Stillwater’s award-winning documentary, Shining Night, makes its Northern California debut right where it all started — in San Francisco. The first-time filmmaker explores a more private side of the beloved composer Morten Lauridsen, as well as the universality of music.

“It [music] is a universal idea. We have song within all of us — every single group of people, no matter what their ethnic background, their religion, anything,” said Lauridsen. “Rhythm is within all of us. Our heartbeat is in three-quarter time. This idea of song connects us — as I have devoted my life to writing vocal music, which is the most personal of all instruments, the human voice; it’s something that connects us all. We’re able to celebrate. We’re able to grieve. We’re able to express joy. It is the one art of all the arts that is universal.”

Stillwater’s film began as a recording of a performance by Volti, a seasoned San Francisco–based choral group under the direction of Robert Geary, and an interview that was a part of its “Great Song” series — a series that asks the question “What Is the Great Song?” However, the music spoke for itself. Indeed, the experience so moved Stillwater that it practically demanded its own story — the story of Lauridsen himself — so the performance became the film’s soundtrack.

“My wife said to me, ‘Whose music has touched you the deepest? Because you should interview them.’ And it didn’t take long to come up with ‘Morten Lauridsen,’” said Stillwater, who also plays acoustic and electric guitar. “I thought, Well, he’s so hard to reach. He’s kind of [private]. How could I interview him? Yet he responded when I asked, and we met and had a short interview. I thought it would be one five-minute part of a movie. What happened was that the music that he had [done] and the filming of the music just became so compelling, the little interview just kept growing longer and longer.”

“I have devoted my life to writing vocal music, which is the most personal of all instruments, the human voice; it’s something that connects us all.” – Morten Lauridsen

After flying to Scotland to record the missing piece, Lux Aeterna, and then back to Los Angeles for another interview with the composer, Stillwater finally had the soundtrack, the subject matter, and enough material to make the documentary. But one other part of the story was still not accounted for.

“Then he [Stillwater] said there’s one thing missing … and that’s your time that you’ve been going to this remote island off the San Juan Islands each summer,” Lauridsen remarked. “I said, ‘Well, you’re right. The film would be incomplete without it.’ I completed much of my work up there and kept that side of me very, very private all these years. It’s just a very rustic cabin (I have two cabins now, but neither of them have electricity or running water or any of those kinds of conveniences). But in this, especially my first place up there — a converted general store — I completed O Magnum Mysterium, Lux Aeterna, and many other works on a $50 piano by candlelight.”

The film’s success is also a long “goodnight kiss” to the notion that classical music is untouchable or separate from all other arts.

The documentary premieres at San Francisco’s Brava Theatre on June 9 with upcoming showings in Portland; Ashland, Oregon; and Seattle. The film won Best Documentary at the 2012 Washington D.C. Independent Film Festival plus an Honorable Mention at this year’s Los Angeles Movie Awards.

“I just want to get in how honored and privileged I feel to have been given such close access to this masterful composer who’s not only masterful in his music but has the capacity and the presence to speak in such a deep way about the nature of the music and how he accesses it and how he brings it forth,” said Stillwater. “It’s been an amazing and wonderful experience. So, I just wanted to communicate that, as well.”

The film’s success is not merely a nod to the importance of choral music but also a long “goodnight kiss” to the notion that classical music is untouchable or separate from all other arts. According to Lauridsen, that hierarchy is “for juveniles.” Lauridsen, who genuinely loves what he does — why else would he do it for 30-plus years? — had some praise of his own to give: “Volti is just an absolute crown jewel for the culture of choral music of our time, especially right up there in San Francisco. It’s the most wonderful thing.”