The Future of Classical Guitar Featured at Omni Next Generation Concert

The future of classical guitar will look and sound very good on Jan. 29 on the stage of St. Mark’s Lutheran Church. Richard Patterson — artistic director of the Omni Foundation, which is presenting the concert — has total confidence in these five adolescent performers, as do their teachers.

“When I started playing, in the ’70s, you could probably count on the fingers of one hand the people who played really well,” chuckles Scott Cmiel, director of the precollege guitar program at the San Francisco Conservatory of Music. “And now I have students who play better than the professionals did back then.”

Two of Cmiel’s current students, 12-year-old Emilia Diaz Delgado and 17-year-old Reade Park, will be featured in the Omni Next Generation concert. They’ll be joined by other competition-winning teens: 16-year-old Eric Wang, a student of Robert O’Connor Miller, and siblings Jack Davisson, 16, and Elle Davisson, 14, who’ve been studying with Christopher Mallett since the founding of the California Conservatory of Guitar in 2011. Mallett and Miller are co-directors of the renamed California Conservatory of Music, as well as guitar faculty.

“Our guitar pedagogy needed to develop,” Cmiel points out. “The reason violinists have been so good is, there were violin pedagogues like Ivan Galamian and Leopold Auer. I read all their books, thinking, ‘We don’t know how to teach, let’s do what the violinists do.’ Then I saw the first wave of Suzuki violin go through the U.S. and thought, ‘that’s amazing!’”

Adapting the method to guitar, Cmiel went on to become president of the Suzuki Association of Northern California. (Several of the five Next Generation performers began their childhood training with the Suzuki method.) Cmiel notes that the SFCM, in addition to its college and precollege guitar programs, has recently implemented an Early Childhood program, with three six-year-old guitarists, as well as pianists and violinists.

All five instrumentalists in this month’s Omni presentation have appeared in previous Omni series, opening for seasoned professionals. But this is the first time they’ll have the stage to themselves. Because of COVID, it will also be “the first in-person ‘real’ concert in a while for us,” says Jack Davisson, seated beside his sister in the dining room of their Palo Alto home. “But there are down sides,” adds Elle, who with her brother has been regularly posting guitar-related videos, scores, tablature, and text to Instagram during the pandemic. “Any time there’s real people listening to what I’m playing, I’m nervous, especially five minutes before I’m about to walk on stage.”

At St. Mark’s, Jack will open the evening with Isaac Albeniz’s Torre Bermeja and Domenico Scarlatti’s Sonata K53, followed by Roland Dyens’s setting of Dizzy Gillespie’s “A Night in Tunisia.” Elle will follow with three selections from Sérgio Assad’s Seis Brevidades and Heitor Villa-Lobos’s Etude 7. She values being brought up in a musical partnership, sometimes performing with her brother as the Davisson Duo, and benefitting in her solo work from his observant feedback. “While I’ve been going through the Brevidades, Jack has been able to catch a couple of wrong notes,” she says. “Then I’ll ask him, should I just pluck a chord or should I do a quick rasgueado.”

“We love the rhythm and vibes of Brazilian music,” says Jack, “and we especially love the Assads, Sérgio and Odair, because they’re siblings and they’re a duo, just like us.” Sérgio Assad will also feature in the second part of the Jan. 29 program, when Eric Wang will perform his Aquarelle, after which the Davissons will reappear as a duo with the Tango Suite No. 1 by Astor Piazzolla, Leo Brouwer’s arrangement of the Beatles’ “Penny Lane”, and the folk song “Shenandoah.” arranged by Omni’s Richard Patterson. They’ve commissioned Clarice Assad, daughter of Sérgio, for a new duo composition.

“For me, classical guitar is a bridge to all music,” Jack attests. “The Beatles are one of Elle’s and my favorite bands, and this lets us play ‘Penny Lane’ as a classical piece, to make it more interesting where there aren’t any words.” Of “Shenandoah,” which Patterson provided to the duo, Elle says, “It’s great to play a piece that everybody knows, and with these right dynamics, the two lines really flow together.”

Emilia Diaz Delgado will open the second half of the concert with two movements from Brouwer’s original composition, El Decameron Negro. “Emilia heard this and fell in love with it,” her teacher Cmiel relates. “She has a very visual imagination, and it plays into her performance of this piece.” Delgado is also a nascent filmmaker who has produced her own video of her playing Nikita Koshkin’s Usher’s Waltz, in costume.

Breaking down genre barriers, deploying multiple talents, and sensitivity to social and cultural issues emerge as hallmarks of this musical generation. Delgado and the Davissons have made a point of including minority composers in their repertoires, and the siblings have used some of their performance videos as fundraisers for good causes. Reade Park, closing out the first half of the Omni concert, will present Thelonious Monk’s “’Round Midnight,” in Roland Dyens’s arrangement. “Dyens was super-good about being open to the world, and he was a great improviser,” says Cmiel. “And I’m really happy that Reade has incorporated his own improv, it fits him really well.” Park had been inspired by former SFCM faculty Judicaël Perroy’s rendition of Rachmaninoff’s Prelude in G Minor, and prepared for his performance of it at St. Mark’s with practice both on piano (in the original format) and on guitar (in Ian Fougeray’s arrangement).

Wang, on a prompt from Omni, proved himself a competent music journalist, conducting a promotional video interview with Delgado. Both of the Davissons are soccer players as well as accomplished academics at the competitive Gunn School in Palo Alto. Although they hope to maintain their relationship to guitar and to their duo act, they anticipate pursuing dual musical-academic majors in college. Their longtime guitar instructor, Chris Mallett, “makes it very clear that he’ll support us, whatever we do,” says Elle, “but I don’t think he’s the kind of person who’d dictate what we should do with our lives.”

For their part, the kids’ guitar teachers, and the Omni Foundation, have together imbued in the youngsters the vital value of community, alongside virtuosity and musicianship. “All of these kids who’ll be performing in this concert are kids we’ve known for a really long time,” says Jack. “We’ve competed with them, we’ve performed with them, and because it’s a small, tight-knit group, it’s very friendly. I myself have been teaching [online] for a little more than a year now. And when I teach somebody, I also learn about myself.” 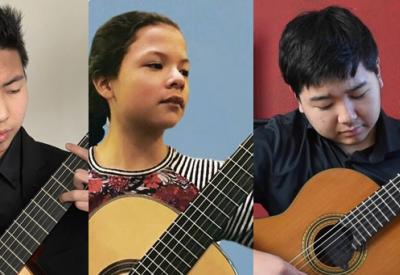 Next Year - Next Generation Guitar Concert

The series presents a retrospective program of music for guitars by the experimental composer.

The Pacific Guitar Ensemble continues to tap the instrument’s potential with another enticing recital.