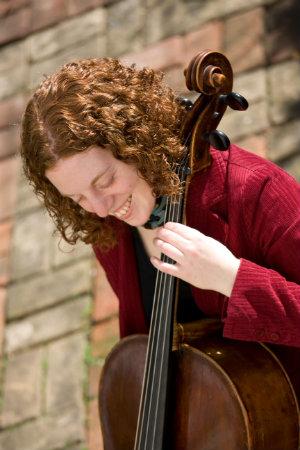 Hannah Addario-Berry: The Joy of Difficulty

The order of the day for a young musician is to become an entrepreneur. It has become, and one could argue far too slowly, the new Plan B. If you don’t make the symphony roster or if you don’t want to become solely a teacher, then you must pitch your own gigs, write your own grants, sell your own CDs, and build your own audience.  You do it all yourself and hope your ambition doesn’t give out or need new shocks, and always the question remains, what keeps you going besides the music?

Hannah Addario-Berry, 32, grew up in Salt Spring Island, which is at the end of the San Juan Islands off British Columbia. It’s an island of 10,000 people, including Addario-Berry's first cello teacher, a visual artist by day. From an island, she got to the San Francisco Conservatory of Music, with a Master's in Music in 2006. And then to the Del Sol Quartet, and just now to the beginning of a five-month tour starting on July 31, in San Francisco's Old First Concerts, and ending on January 10 in Brookings, Oregon.

The tour is a pilgrimage to honor the great Hungarian composer, philosopher, and ethnomusicologist, Zoltán Kodály (1882-1967). The program includes the Sonata for Solo Cello, Op. 8, which is distinguished by his use of scordatura (non-standard tuning), and is generally regarded as the one of the most difficult cello pieces ever written. The program also includes six pieces commissioned by Addario-Berry just for this tour.

To launch the project, Addario-Berry used a 30-day Kickstarter campaign to raise $18,000 from more than 150 people. The funding platform is all or nothing. If you don’t reach your target, the funders are not charged. So the secret is to have a tried list of friends, fans, and angels. Addario-Berry had that mix of support and initially thought she should set a $20,000 goal. But she grew nervous, particularly after friends advised a goal of $10,000. Eventually, she settled on $15,000.

“One of my strengths as an artist is building and maintaining relationships,” she told us over the phone recently. “After concerts I always look to see who’s there, to reach out.”

Asked what she still needs to learn, Addario-Berry replied, “One thing I still have to learn is to know when it’s better not to try to do it all. My inclination is to wear every hat. But that makes it hard to prioritize the creative process and just be a musician and put my art above everything else.”

Her ideal schedule is to practice for three hours every morning — before sitting down to breakfast with the social media. Before running in the park. Even before spending 25 minutes in Zen Buddhist meditation. The problem is that she’s designed a life that depends on nearly perfect balance. Without meditation, for example, she may not sleep, which makes it difficult to practice, which over time becomes a worry.

It’s all the art of staying in balance, which you could argue becomes its own distraction.

Nor is there a libertine’s night life in this diary. And so where’s the fun? In the music, of course. And in the cello, itself: the human sound of it, the way you feel the instrument in your chest, the way the body wraps around it. The physicality of it, a kind of abstract eroticism, with an object that is deeply complementary.

The fun is also in the very process of maintaining a balanced life. Discipline is its own joy. And Addario-Berry would add that the fun is with her partner, Wil Turner, a software engineer and former classical ballet dancer. It was he who got her on the road to Kodaly.

“I always thought this sonata was beyond my ability. But then two years ago I met the man I’m going to marry in a couple of months. I played a recording of the piece for him and he asked if I’d played it, and I said, ‘Oh no, it’s far too difficult.’ But he challenged me and encouraged me not to set limitations on myself. And so I started learning it. At the time I said, ‘OK, give me three years.’ Little did I realize that two years later I would have learned the piece, recorded it on a CD, and be setting off on a North American tour.”

And what now, we asked. What’s the next big project?

After considering whether to go on the record and the effect that might have, she replied, and brazenly, “Starting a new family is the next big project.” There was a long pause and she added, reassuringly, as though to herself and fans alike, “But I intend to keep performing. I won’t stop being ambitious. I don’t think I could ever stop being ambitious.”

CORRECTIONS: Addario-Berry's first cello teacher was a visual artist, not a house painter. She also received her Master's in Music in 2006, not an M.A. in 2004. And her fiancé, Wil Turner, is a former classical ballet dancer. He retired in 2001.