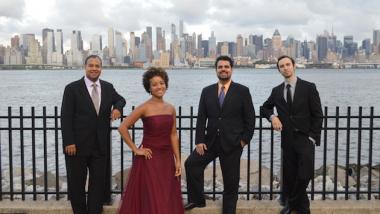 The Harlem String Quartet Gets Jazzy

It's not often you get to hear a string-quartet program that includes a little Beethoven, a little Mendelssohn, and a little Dizzy Gillespie and Chick Corea. But that's what you get at a performance by the Harlem String Quartet — an eclectic blend of classical and jazz chamber music, coming to Music at Kohl Mansion in Burlingame on April 17.

Aaron Dworkin, founder and president of the Sphinx Organization, brought together the Harlem String Quartet in 2006. Each of the original members was a first-prize winner of the annual Sphinx Competition. “Aaron Dworkin, he has a good eye for personalities,” says Cuban violinist Ilmar Gavilán, one of the founding members. “Among all of the possible first-prize winners, he sort of felt that the particular four that founded the quartet would be a good match.”

“He asked if we would be interested in championing Sphinx's mission of going to inner-city schools and promoting classical music, and we said ‘yes,’” says Gavilán. The current quartet includes violinist Melissa White, another original member, plus violist Jaime Amador and cellist Felix Umansky.

The quartet began rehearsing at a space in Harlem, and visiting many of the neighborhood schools — thus the name. During this time, they began to develop their jazz repertoire. “This was a very natural progression,” says Gavilán, “because we felt that during the outreach we were losing the kids initially. So this [doing jazz] was out of necessity ... we either started playing something that they could relate to immediately, or we were going to be have to do outreach that was only 10 minutes long,” he added with a laugh.

A few months later, they played their debut concert at a Sphinx gala at Carnegie Hall. After the concert, someone approached them from a management company, who told them that she thought there was a good market for them. The rest is classical-jazz history.

Although the group does not do their own jazz arrangements, they often modify the ones they get and personalize them for their instruments. Most of the arrangements have been done just for them by friends or by people they met while on tour.

In 2009, the Harlem String Quartet was asked to perform at the White House, which Gavilán says was “really amazing.” A few years later, the quartet was invited to perform at a tribute to Chick Corea on his 70th birthday by Chamber Music America. It went so well, Corea invited them to record with him and Gary Burton for their Hot House album, and the piece they collaborated on, "Mozart Goes Dancing," won a Grammy for best instrumental composition. They were then invited on the six-month “Hot House” tour with Corea and Burton.

Gavilán said doing a jazz tour was quite refreshing as well as educational. “You would be surprised how many things they [jazz and classical music] have in common,” he says. “Even things like rigidity for instance; jazz actually has a lot of rules. To do it well, you have to really first understand many principles. But then when you get to the level of Chick, the freedom comes after a lot of following rules. In reality you end up sharing your most intimate feelings in both genres, in a most fluid and genuine way and that only is achieved with some personal freedom,” he adds.

“And we found that the kind of acute awareness that is required in jazz to follow something you have never rehearsed is actually a very good tool to doing classical music,” he explains. “It allows you to be way more spontaneous on the stage.”

This year the quartet will be touring with Gavilán's brother, Aldo López-Gavilán, a renowned classical and jazz pianist.