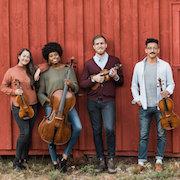 Harmony is the Key for the Thalea String Quartet

There is a cliché that says being in a string quartet is like being in a four-way marriage and in many ways, that’s true. Not only do you have to be musically compatible, you have to have the same vision for the music, and you have to get along. And that’s what works for the Thalea String Quartet.

The group was formed at a festival in Italy in 2014. And although there was no intention to create a professional quartet at that time, violinist Christopher Whitley, one of the founders of the ensemble, said that after three weeks of five-hour daily rehearsals, they just clicked.

Since that time, they have performed to acclaim at recitals in Europe, Canada, and the U.S., including their debut at the Kennedy Center in 2016, and were the first quartet-in-residence at the San Francisco Conservatory, which they all attended. They are currently in residence at the Butler School of Music in Austin, Texas, where they are being mentored by the celebrated Miró Quartet, as well as being in a part-time residency at the Caramoor Center for Music and the Arts in New York, which they visit several times during the year.

With Christopher Whitley and Kumiko Sakamoto on violin, Luis Bellorín on viola, and Titilayo Ayangade on cello, the quartet represents the cultural diversity of Canada, Japan, Venezuela, and Nigeria, an interesting mix. They will be returning for the second time to perform for Four Seasons Arts, at the Regents Theater at Holy Names University in Oakland, on Saturday, January 25.

I chatted with Whitley by phone from Austin about the group and what we can expect at their upcoming concert. He was palpably enthusiastic about Thalea, and the extensive and exquisite repertoire written for string quartets.

What are the difficulties and rewards of working with a string quartet?

The reality of being in a quartet is that there are four people that are in a pretty high-intensity job, and when you are dealing with such a subjective art, there are going to be differences of opinion and thoughts about what the next career steps are going to be. But that’s what so great about it. You have four people who have different opinions, and when you bring that together, you create something quite a bit more substantial than when you are sitting by yourself in a practice room.

What do you think differentiates the Thalea String Quartet?

There has been a popular trend in music over the last few years towards diversity. Coincidentally, when you look at a picture of our quartet, our makeup is incredibly diverse. It was just a coincidence, but we are very privileged to have the opportunity to be able to speak to diversity without even saying anything.

Another thing that has become really important to us is diversity in the voices we perform. So on every program we try to play a piece by a composer of color or a female composer, and ideally in five years I wouldn’t even have to mention that — it would be a given.

Your upcoming concert features the West Coast premiere of Switchback, by Tanner Porter. How did that come about?

We spent six weeks this summer at the Norfolk Chamber Music Festival at Yale, and they invite two composers to write original pieces for the ensembles in attendance. We were lucky to be paired with Tanner — she is an incredibly talented young classical composer.

What’s extra special is that the piece has a West Coast theme. Every summer Tanner goes on a hike with her family in Yosemite, and the title, Switchback, is about climbing up the mountain and looking down, so we thought it would be really special to bring the piece to California.

Is there anything special about working with a composer directly on a new piece?

It’s a really unique opportunity, as an instrumentalist and as an interpreter, to get to say what you think about a piece, because you can’t call up Beethoven and tell him, “That part wasn’t so great, can you give us another version?” We spent five days tooling through the piece — seeing what worked, and what we thought could be shifted around.

Were any changes made during that process?

We had a lot of discussions about the ending of the piece. She had a great ending, but when we first met, she said, “I’m not sure if it’s exactly what I’m looking for,” so we tried all sorts of different endings. That was a really interesting process, and we ended up with something relatively different. It was an incredible working experience for all of us.

How would you describe the music for Switchback?

It’s a really interesting blend. There are some very spare spots and very rich expansive areas. There’s a folksy element to it and a church music vibe, and it’s definitely connected to the Renaissance and medieval music. It’s really beautiful and approachable, and relatively tonal, but it’s still going to demonstrate things that some audiences may not have heard before.

Tell me about the second piece on the program, Britten’s String Quartet No 2. Why did you choose it? [NOTE: The Britten quartet has been dropped from the program for Four Seasons Arts at the Regents Theater.]

We have always been attracted to Britten’s quartets. He has such a unique compositional voice. And the string quartets that he wrote are pillars of the 20th-century repertoire. We had really been wanting to play one of his quartets, and this season we were able to take one of them on.

The second quartet was commissioned to celebrate the 250th anniversary of Henry Purcell’s death and is one of the most popular. I think it is flat out one of the most brilliant quartet pieces ever written. It also has a really fascinating historical context. It was published in 1945, and Britten had just gone on a tour across Europe. He was a pacifist all his life and a conscientious objector during the war, but it was the first time he had seen what had really gone on, so each movement is a different depiction of what he had seen.

The first movement is very mysterious and textural and there is a lot of pain, confusion and loss in it, but also moments of real triumph. The second movement, we think of as the war. It’s four minutes and very quick, and there are sections that sound like planes flying over.

The third movement takes the form of a Chacony, the Baroque dance, and has 24 different variations on this theme. It starts off completely desolate and some points are heart-wrenchingly sad. But what’s amazing is the last variation. I think there are 24 big C-major chords played by three out of four in the group, so after all this pain and sadness and confusion, we end with one of the most fundamental and joyous chords you can play in music. It’s very uplifting, hopeful, and positive.

It was written in the early 1800s and is one of the greatest quartets in history. It was one of three quartets commissioned by the Russian nobleman Razumovsky. The first movement is complex, stormy and emotionally unstable and there are several dramatic silences. It feels very uneasy.

The second movement is one of the most beautiful movements he ever composed. This was a time when scientists, musicians, and artists started looking beyond the world as we see it — what is out there beyond what we can see? It says, “To be played with the utmost sentiment,” and when Beethoven takes the time to write something like that — you do it.

The Count suggested he include some kind of Russian theme, which he layers into the third movement, which is kind of unsettled. The last movement is in a major key, but he ends it in E minor, and I think it’s the only quartet he wrote that ends in a minor key.

Do you have any particular goals as a quartet?

I think it takes a little bit of time to really see not only what we’re interested in as a group, but also what audiences get from us most effectively. We’ve always been really committed to community engagement and education and I think our main goal is to connect with people and allow them to connect with the music that we play. Even if it’s really complicated modern music — something that audiences might find challenging, it’s our goal to create a context that anybody can understand. We can all experience this music in our own unique way. People don’t need to know the history — they can just enjoy the beauty. 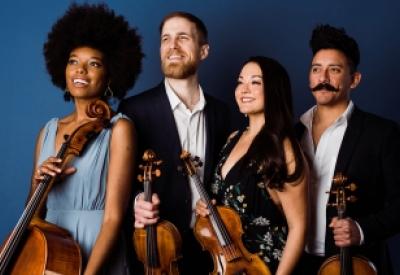 The young string quartet, the first quartet-in-residence at the San Francisco Conservatory of Music, also performed early works by Webern and Beethoven.