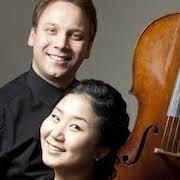 Cellist Dmitri Atapine is not what you think of in connection with the term “jet-setter.” He’s a regular guy. With his wife, pianist Hyeyeon Park, he runs the small Apex Concerts chamber music festival out of the University of Nevada-Reno where they both teach. He wears off-the-rack clothes; no one special does his hair.

Yet Atapine and Park have more adventure in their biographies than you pick up at first glance. “When I was 11 years old,” he says, “The Soviet Union was crumbling and my parents, both musicians, saw a great opportunity to leave the country for Spain.” He arrived at a time when Spanish culture was burgeoning in a new atmosphere of openness. He spent his teenage years “all my teenage angst” in Spain and then at 18 came to the U.S. to study. “I very much feel that I have these three motherlands in my past: I feel very Russian, full of that culture that was passed to me and I’m very proud of that background. A lot of that was transmitted to me by my parents with proper Russian reverence. Spain, both of us would visit many times because we go to see family there and the culture is so rich in regions and traditions. I truly feel Spanish when I’m there.” “He becomes a totally different person,” cuts in Park. “And he was rooting for Spain in the last three World Cups.” “And,” says Atapine, “I’m very thankful to the U.S. for what it gave me, and we’re happily living there and I’m an American.”

Atapine and Park are [email protected] babies; he arrived in 2008, she in 2009 in the International Artists Program, where they also fell in love and got married: They have one baby boy, which is why they are riding out the pandemic in Seoul, South Korea, leaning on Park’s parents for childcare while they work. The pair had just uploaded and hosted their first pandemic-created Apex Festival performance the day before we spoke and Atapine had played a live concert in Taipei a week earlier. So, while he’s not James Bond, exactly, he and Park both have a lot of experience under their non-designer belts.

Undoubtedly that’s why Wu Han and David Finckel turned to them to start off [email protected]’s fall online offerings, which they’ve dubbed the “Explorer Series.” That’s a moniker that could fit Wu Han and Finckel as well, not to mention the various festivals they’ve curated. “For both of us, [email protected] was a life-changing experience,” Atapine says. “The festival is part of who we are, but what we learned in the first two years, not just about how to play the instrument but also about how to be great musical citizens, how to be ready for anything.”

Atapine and Park are two of a number of artists who learned how festivals work at Menlo and then went on to found new ones themselves. “We were inspired by the figures of Wu Han and David, by their entrepreneurship, their desire to share music with the world and we just asked,’why not us, too?’ They emboldened us, which is,  I think the most important thing that mentors can do. They are always open to give advice, and the most impressive thing is that they always have time for you. That shyness that you feel when you’re [proposing something new] — just go for it! That’s what we learned from David and Wu Han.”

That connection allows Wu Han and Finckel to curate great music even in the most trying circumstances. To lead off the Explorer series, Atapine and Park chose to take the festival audiences to Spain. Interestingly, Park did not go Spanish entirely because of Atapine. “I was not really exposed to Spanish music until I was 14 or 15. Growing up in South Korea I was really focusing on German and Austrian music but when I first heard Spanish music I was totally fascinated and ever since I’ve been trying to learn as many pieces as possible. But the event that opened my eyes truly was back in 2004. I got to go to the Santander Festival where I had the honor of playing for Alicia De Larrocha [the great Spanish pianist]. All the pianists at the festival had to learn one or two Spanish pieces, which culminated in a concert celebrating her life. And she was teaching us all those pieces and it was an eye-opening moment that really changed my perspective.”

Atapine and Park’s Spanish program, which premiered on Sunday, includes music by Albeniz, Granados, Gaspar Cassado, and Claude Debussy. It’s available through this Sunday on the [email protected] Vimeo channel or direct from the festival website. Tickets can be purchased online or from [email protected] Patron Services, 650-331-0202.

An Exploration of Schubert at [email protected]’s Summer Festival

This year, the chamber music festival features performances of the music of and music that inspired the Austrian composer.