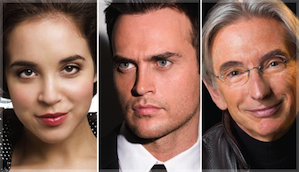 Who can count the number of performances West Side Story has received since its Broadway premiere, on September 26, 1957? It’s now in the tens of thousands, including productions in opera houses and all over the world.

Yet the musical that updates Shakespeare’s story of Verona's feuding Capulets and Montagues to New York's Sharks and Jets in the 1950s has never been seen complete in concert. But last year, S.F. Symphony Music Director Michael Tilson Thomas approached lyricist Stephen Sondheim and the administrators of the estates of composer Leonard Bernstein, choreographer/director Jerome Robbins, and book writer, Arthur Laurents, to see if it might be possible.

“In discussing various projects for the final week of the San Francisco Symphony season, West Side Story kept coming up,” explains John Mangum, Director of Artistic Planning for SFS.

“The original Broadway version of the show is something that Michael has been eager to do for a very long time. But it had never been presented in concert before because of the very specific instructions of the four creators, who always wanted it produced with music, lyrics, libretto, and choreography intact. It was Michael’s personal request to those who hold the various performing rights that really made it possible. We’re very grateful to them.”

Thus began plans for the world’s first concert version of the show, with the sumptuous symphonic treatment that Bernstein favored, but without the operatic treatment that some feel compromised his own 1984 recording of his masterpiece. The performance began to come together when hot property Cheyenne Jackson, who had previously told MTT that he had always wanted to sing Tony with the San Francisco Symphony, confirmed that he could fit the early summer dates into his schedule. It’s especially fortuitous timing for the star of stage, TV, and the Liberace movie, Behind the Candelabra, given that his first solo CD will be released on June 25, just two days before the first of SFS’s five performances of West Side Story.

“We are trying to get back to the piece in its American Broadway origins.” – Michael Tilson Thomas

With Jackson confirmed, the orchestra next worked with casting directors on both coasts to audition outstanding young artists who would fulfill the creators’ vision of the piece. MTT attended the New York auditions and watched those in L.A. on video before handpicking his cast: Alexandra Silber (Maria), Jessica Vosk (Anita), Kevin Vortman (Riff), and Justin Keyes (Action) are names the theatrical-savvy may know; up-and-coming actresses and actors whose names will likely grace marquees in years ahead play the smaller roles.

MTT sums up the essence of the concert, saying:

West Side Story is such an essential piece, and such essential American icon. We all know the music, and yet it’s curious how few of us really know the continuity of the whole work. There have been few opportunities to really hear the piece under ideal musical conditions, because the recording made by Bernstein himself was made with mega opera stars.

“We are trying to get back to the piece in its American Broadway origins. And, of course, we’re going to have the sumptuousness of the symphony at our disposal. But the guiding principal will be to transmit that wonderful lean expressive quality that the Broadway tradition represents.”

Lean, just like those impossibly thin, amazingly stylish Jets and Sharks who danced their way into American mythology.