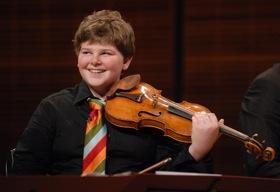 A 15-year-old from Cleveland is coming to town to join the California Symphony in a program titled, simply, “Virtuosity.” The concerts on March 7 and 9 will feature the young virtuoso Chad Hoopes playing Max Bruch’s Violin Concerto No. 1. The easy demeanor and youthful enthusiasm Hoopes brought to his recent phone conversation with SFCV has also served him well on national talk shows, including the CBS Early Show and PBS’ From the Top: Live at Carnegie Hall.The acclaimed violinist has performed from Peoria to Oslo and from London to the Napa Valley. When he was 13 he won first prize in the Young Artists Division of the Yehudi Menuhin International Violin Competition. Now living in Ohio with his parents, whom he describes as wonderfully supportive, Hoopes also performs in a trio with his two sisters. The eldest is a violist currently studying at Juilliard, and the youngest is a violinist in her senior year in high school.

Studying violin since the age of 4, Hoopes says that he practices between three and five hours a day, but plays between seven and eight hours a day, what with rehearsals and performances. Still, like any 15-year-old, he finds time to “chill out” with friends, and enjoys school and social time, as well as the occasional games of Wii and even “Ultimate Frisbee” and basketball, though he says that he doesn’t play the latter too intensely, to protect his hands. Currently playing a 1713 Stradivarius, he describes his musical tastes as broad, and says that he has such respect for composers that it is difficult to pick a favorite; he does venture that he’s particularly excited about learning the Tchaikovsky Violin Concerto, which he’ll perform in July with the San Francisco Symphony under the direction of Donato Cabrera.

As for the 23-year-old California Symphony, it has a history of promoting young artists, having featured in their U.S. debuts such well-known violinists as Sarah Chang and Kyoko Takezawa, and pianists Helen Huang and Joyce Yang. Music Director Barry Jekowsky is no stranger to an early career himself. He began playing on Broadway at the tender age of 14, doing percussion in the Tony Award–winning Man of La Mancha, and moved on to straddle the worlds of classical music and Broadway by continuing as substitute percussionist in various Broadway shows while also subbing with the New York Philharmonic. Jekowsky, former music director of the Reno Philharmonic and associate conductor with the National Symphony, has also taken a particular interest in young American composers, having founded the California Symphony’s Young American Composer-in-Residence Program in 1991. The company has a predilection for American composers, as evidenced in this season’s inclusion of works by Mason Bates (all of 30 years old), a local composer whose work spans both classical and electronica compositions. In addition to Hoopes playing the Bruch, the upcoming concerts will feature John Adams’ Common Tones in Simple Time and Dvořák’s Symphony No. 8. If the rave reviews Jekowsky has garnered are any indication, perhaps spring will come early to Walnut Creek’s Lesher Center for the Arts, in the form of youthful, blossoming artistry.

A Season to be Thankful: In Conversation With Soprano Angel Blue

The Year of Singing Safely: Susan Graham’s Operatic Art in 2020