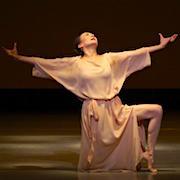 A century ago, the visionary Isadora Duncan returned to her birthplace of San Francisco for the last time, to perform a program of dance to the music of Chopin, accompanied by concert pianist Harold Bauer at the Columbia Theater (now called the Geary). San Francisco Chronicle reviewer Redfern Mason wrote, “It is the art more of the spirit than of the flesh ... in surges of psychic ecstasy and despair.”

Last month, in an email to renowned teacher and dancer Joanna Harris, the Chronicle’s Claudia Bauer, who’d just reviewed a tribute to Duncan by former Bolshoi Ballet dancer Natalia Osipova, opined, “I think people project onto Isadora anything they want themselves to be, and anything they thought she might have been.”

Next Friday and Saturday, Sept. 7–8, the San Francisco-based Mary Sano Studio of Duncan Dancing will present a two-day 20th-anniversary program at the ODC Theater, showcasing choreography by Duncan and Sano to a variety of composers, with accompaniment on piano, harp, violin, koto, and voice.

“We have so much of Isadora’s writing,” says Sano, over a meal near her Fifth Street San Francisco studio. “And she said that these particular composers understood the movement of the human body.” Unfortunately, there’s little in the way of direct Duncan notation, and only a few seconds of her dancing on film.

Joanna Harris authored a book titled Beyond Isadora on Duncan and the history of modern dance in the Bay Area, and taught dance at UC Berkeley and UC Santa Cruz. At Berkeley, she collaborated with the late music critic and SFCV co-founder Robert Commanday on an opera, while he was teaching and directing choruses there. “One of the things I’ve taught is that [Duncan] understood breath rhythms,” says Harris, speaking from Bavaria, where’s she’s been leading workshops in Duncan-influenced dance. “She found the pause and the resting moment, and that’s a wonderful talent I don’t see enough of. When dancing to classical music, you have to hear the pause, you have to hear and feel where the rest comes.”

Duncan was born in 1877 at 501 Taylor Street in San Francisco, the youngest of four children of a piano-teacher mother and a businessman father who abandoned the family soon after his business went bad. The children, who performed together in vaudeville and later taught dance, relocated with their mother, Dora Gray, to 8th Street in Oakland. Raymond, Isadora’s older brother, sparked his sister’s interest in ancient Greece, from which she derived much of her trademark postures and gossamer costuming, in which she later performed without undergarments.

The family began to disperse from the West Coast in 1895, eventually settling in England and Europe. Although Isadora studied ballet, she developed her own philosophy of dance, of which she spoke, at the Berlin Press Club, as “the free spirit who will inhabit the body of new women, more glorious than any woman that has yet been.”

“You go inside yourself, to really get in tune with the naturalness of you,” is how Sano explains her transmission of the Duncan approach. “And we become one with the music, not just dancing ‘to’ it, because our work is the music. The body is in motion all the time, also connecting with this Earth, and with the universe.”

In her time, Duncan was at least as famous, or infamous, for her lifestyle as for her art. “She was a free-love advocate, an alcoholic, a mother, a tragic figure,” notes Harris, “so anything you needed an ideal woman to be, she could become for you. It would depend on whether you liked the look of a woman who, in 1898, was wearing almost nothing on stage besides a Greek tunic, and was dancing to Brahms and Chopin. She went to the English salons, where she got support from Gordon Craig, the great theater designer, and they thought she was wonderful, because, like Craig, she brought light into the theater.”

Starting in Berlin in 1904, Duncan founded several schools of dance. She bore Craig a daughter, out of wedlock, and then had a son with sewing-machine scion Paris Singer. Both children died when their car plunged into the Seine in 1913. Over the next few years, Duncan trained and then legally adopted a group of young girls who became known as the Isadorables.

The loss of her own children and the devastation of the First World War are said to have turned Duncan’s dance from the lyric towards the dramatic and influenced her attraction to the music of Scriabin and to the culture and revolutionary politics of the nascent Soviet Union. In 1922, shortly before forfeiting her American citizenship, Duncan bared her breast on stage in Boston, waved a crimson scarf and declared, “This is red, so am I.” Five years later, another of her favored scarves got caught in the spokes of a wheel of a sports car in which she was riding in France, and she died of a broken neck, at age 50.

“All these are wonderful pieces of gossip,” comments Harris, “and have nothing to do with the dancing.” Nonetheless, Duncan’s lifestyle had a lot to do with bringing celebrity to dance. “At one point, after Isadora had become a sensation, everybody across the country had a Greek tunic and was dancing like nymphs,” says Sano, noting that Duncan also had a tangible influence on the Ballets Russes. From her first performance in Russia in 1904, “Isadora began to be a sensation among artists there, including Nijinsky and Pavlova and Diaghilev. They were trying to build something new, to break from the Italian concept of the corps de ballet, and they saw Isadora dancing to Chopin, almost naked, so grounded, yet ethereal.”

After Duncan’s death, her Isadorables continued to perform and to open their own schools, transmitting their approach through live example, as has been the case since. Harris says that her Duncan connection “goes back almost 75 years, because I started as a four-year-old child with the Duncan Dance Guild in New York City, when I think the memory of Isadora was still within people’s memories and training.”

Sano, daughter of a Japanese mother and American father, had studied traditional folk dance while growing up in Japanese. She also became acquainted with the "contained" movements of Noh theater, and worked as a model. Visiting San Francisco in 1979, she met Mignon Garland, a “second generation” Duncan dancer who’d studied with two of the Isadorables, Anna and Irma Duncan. “That changed my life forever,” Sano chuckles. “Mignon introduced me to free movement, and how to bring out the drama, like an actor. Maybe because I was Japanese, through the movements I felt the connectedness of myself, and being open to nature. And the deeper I got into Duncan’s work, the more I found similarities [with Japanese dance], where, with a flow of movement, you represent the meaning of a song, about Mt. Fuji, wind, trees swaying, birds flying, the beautiful seasons. Each of those songs is about five minutes long, like a Chopin mazurka.”

When Garland retired, she tapped Sano to continue the Duncan tradition in her own studio. Sano first went to Mills College to broaden her exposure to modern dance, as Harris had a couple of decades earlier. Ironically, notes, Harris, several former Mills faculty — including Martha Graham, Doris Humphrey, ... Hanya Holm, and Mary Wigman — “practically drove away from the United States anything that was Isadora. Isadora took her inspiration from breathing and the solar plexus, in the center of the chest, but with Martha Graham it was a much stronger down-to-earth kind of movement, coming from the lower body. Some unkind people would say the Duncan work is airy-fairy, lots of wafting in the breeze, and lovely hops and skips, and Graham completely obliterated that, walking on the earth, sometimes heel-first”.

After her youthful exposure to Duncan practice, Harris went on to other styles of modern dance, including extensive study in Berkeley with Merce Cunningham, “and that’s completely at the other end of the world, where you can dance in silence, you dance through the back and the legs, and you don’t do narrative. If you look at San Francisco now, you’ll see that there are at least 18 kinds of modern dance going on, and most of it hasn’t any precedent.”

Harris has found the Duncan practice still much admired in Europe, but in American modern dance, it’s “honored more in its absence than in its presence. There’s Mary Sano in San Francisco, there’s Lori Belilove in New York, and a girl in Chicago, and that’s a very small amount of Duncan dancing for a 3,000-mile country, don’t you think? We did have a Duncan symposium at ODC last year, and there were a hundred people there. One of the most interesting groups came from Brazil, so you see there is still this infusion throughout the world with people who feel it’s lovely to move that way. I’m looking forward to Mary’s event, and I will try to be as euphoric as I can.”

Harris and the rest of the audience on Friday, Sept. 7 will witness dances by Sano, six of her students, and a guest dancer to mazurkas, etudes, a waltz, and a nocturne by Chopin, as well as etudes by Scriabin. On Saturday, Sept. 8, the dances are set to Gluck, Schubert, and Brahms, and two original compositions by Sano’s son Tony, one inspired by Duncan’s essays, the other by the first trans-Pacific crossing by a Japanese vessel.

“No one can really repeat what Isadora did, not even her adopted daughters,” Sano admits. “Just as Eriko Tokaji, our pianist, must interpret Chopin in her way, what we are doing is, we are reinterpreting, constantly.”

American Ballet Theater makes the next move in righting a power imbalance; time for S.F. Ballet to step up.

Baryshnikov Delivers a Thrilling Letter to a Man

Madness and high art mingle in this kaleidoscopic one-dancer show.