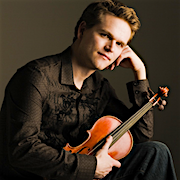 When violinist Mads Tolling swings through the Bay Area with guitarist Jacob Fisher and their “Masters of Jazz Violin” show (Sept. 27 at the Throckmorton Theatre), it will mark a significant milestone on a journey that began with a fateful conversation nearly a quarter-century back.

With teenage bravado and nary a jazz riff in his repertoire, then 15-year-old, classically-trained violinist Mads Tolling once picked up a phone and called the late and legendary Danish jazz violinist Svend Asmussen. Other than shared nationality and proclivity for the violin, Tolling knew little about Asmussen, who performed until he was 94 and died at age 100 in 2017. He wasn’t even certain he had the right phone number, but, smitten after hearing a performance by the musician known in Scandinavia as “The Fiddling Viking,” Tolling was fearless. Learning he had indeed reached the right person, he asked for lessons.

“He told me he didn’t teach but I should just listen to Stuff Smith,” Tolling says in an interview.

Listening to Smith, an American jazz violinist who used his bow like a hammer to play “the hardest, down and dirty blues violin” he had ever heard, according to Tolling, was mind-blowing. “Sven admired Smith and I think he just listened to me tell him about how I wanted to learn jazz but had been trained classically. He probably wanted me to hear someone who’d set my hair on fire.”

Tolling, a two-time Grammy Award-winner as part of the string group, Turtle Island Quartet, has lived-in the United States since 2000. After graduating from Berklee College of Music in Boston, he was discovered by French jazz violinist Jean-Luc Ponty, who recommended he join bassist Stanley Clarke’s band. Today, the San Francisco-based violinist and composer has performed worldwide with Clarke, Kenny Barron, Chick Corea, Paquito D’Rivera, Ramsey Lewis, among others. Forming the Mads Tolling Quartet in 2007 and engaged as an educator and in a number of performance initiatives and collaborations, it’s fair to say the fire lit by Asmussen burns on.

“Absorbing the language of jazz and improvisation, I was like a baby learning English,” he recalls, sounding much like a teen-in-love as he describes delving into Smith’s “Mack the Knife” and French violinist Stéphane Grappelli’s “It’s Only A Paper Moon.” “I would go note-for-note with a CD player that could cycle a 10-second loop so I could do it over and over.”

Imitating the masters of jazz increased not just his physical and artistic versatility, but trained his hearing. Listening to Asmussen’s recordings and performances, Tolling admired his mentor’s bebop-on-violin chops. “Sven’s “Honeysuckle Rose” is highly chromatic, with extended harmonies. Astounding,” he says.

As an arranger for small groups that included violin, bass, guitar, and drums, Asmussen would insert shout choruses typically heard performed only by big bands. Weaving the sections in which all instruments play together but are not necessarily playing the work’s primary melody, these were detailed and “tricky” passages. When Asmussen in his later years bequeathed to Tolling his handwritten charts and other printed materials, what he learned was revolutionary. “I always thought of him as this crazy jazz guy, but I could see from his collection he was a serious musician. He gave me classical etudes. He was a scholar of the instrument, a perfectionist. He actually wrote out his improvisations in the margins. I have probably 20 pounds of music, including books of Swedish and Danish folk music. He’d take things he heard in church and do them as jazz pieces.”

The challenge for Tolling became playing Asmussen’s music while making it his own. An arrangement of “Take Off Blues” adds Tolling’s contemporary sound to Asmussen’s bebop style. “Instead of phrasing on a standard jazz walking-bass line, I approach with a bit of funk, keep it more modal, and stay in one key in a solo section that suggests triads that are “out there” harmonically,” he says.

And now, Asmussen’s imprint is on Tolling’s current projects, a tour with Danish guitarist Jacob Fischer, who was a member of Asmussen’s quartet for 20 years, and a new CD, Mads Tolling Quartet — Celebrating Svend Asmussen. Signature tunes Assmussen performed in the 1940s and 50s with guitarist Ulrik Neumann and works like “June Night” and “Scandinavian Shuffle” are featured on the tour with Fischer, alongside Danish folk tunes, songs from the Great American Songbook and pieces by Grappelli, Ponty and Smith.

“We’re going to mix it up, playing not just music by Sven but things associated with him. “It Don’t Mean A Thing If It Ain’t Got That Swing,” based on a mid-1970s recording made in France by Ponty, Asmussen, Grappelli and Smith, will likely be on the set list. “In the recording you can hear the different ways they soloed. Ponty was young and exuberant; Smith, who was old, was limited so you could hear ideas but he didn’t have the facility he once had on his instrument. Grappelli sounded great, having fresh ideas and command. Svend’s way of playing was very different, not inside the harmony like Grappelli. Svend played like Charlie Parker before he was Charlie Parker. He played in the bebop language with chromatic scales, challenging rhythmic riffs. It’s still melodic but with the language of bebop in it.”

About the collaboration with Fischer, Tolling says that sometimes, his role is to get out of the way. “Jacob isn’t a single chord type player. He fills out the bass, fills the space. Other times, he does a lick, I respond, as if we’re finishing each other’s sentences. I use a chop, hitting the strings percussively, then do long notes for extended harmonies. When he takes a solo, I feel I don’t need to come in because he fills harmony, melody and bass. That frees me up to rest, honestly.”

Asked if he like Asmussen will perform into his 90s, Tolling says, “Yeah, if I’m physically able. Sven was excited to play until the last few years when he had a series of strokes. Even then, he was still writing arrangements, coming up with new shout choruses. It was very sweet that he was still fired up about music.”

Mads Tolling: Violinist Going Back to His Roots

The latest premiere at the Oakland-East Bay Symphony is a concerto from a well-known jazz and fusion violinist.

Regina Carter, who achieved notoriety, and a MacArthur Foundation Fellowship, as a jazz violinist, spoke with SFCV prior to her presentation of a premiere by composer Billy Childs.