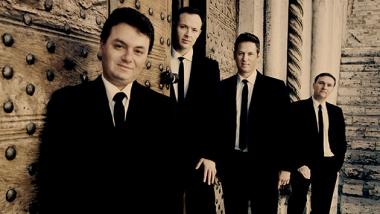 When the founding members of the Jerusalem Quartet begin to play their program of Haydn, Bartók, and Schumann at [email protected] on Sunday, February 22, they will count 22 years since they first made music together.

Their early start, at ages 13-15, was hardly capricious. After their music high school in Jerusalem assigned them to the same quartet and gave them a teacher/coach, the recent émigrés from the former Soviet Union discovered that they could communicate better through music than through the new-to-them Hebrew language. So serious was their dedication to their craft that, by the end of the school year, they had become community ambassadors.

Now, 19 years after their professional debut, the former BBC New Generation Artists can point to their series of exceptionally well-received recordings on Harmonia Mundi, which have earned them the BBC Music Magazine Award and Diapson d’Or Arte for their recording of three Haydn String Quartets. They’ve also received an ECHO Klassik Award for their CD of Schubert’s great String Quartet No. 14 in D Minor, D. 810, “Death and the Maiden.”

While their Palo Alto performances of Haydn and Schumann are likely to inspire excitement, the thorny little piece in the middle of the program, Bartók’s Quartet No. 4, still tends to strike fear into the hearts of many music lovers. Violist Ori Kam, who left the Berlin Philharmonic to join the quartet five years ago, feels that one of the barriers to finding one’s way to the melodies beneath Bartók’s complex lines and spikey dissonances has to do with the way his music is performed.

“I worship the great recordings such as the Emersons’,” he says. “But we ask what can we bring to the table, rather than re-creating something that’s already been done by people who are older and more experienced than we are. So what we bring to this music is to play it like Haydn; we try to play it quite lightly.”

The Jerusalems try to bring out both the music’s melodic and jarring elements. “I think Bartók deals a lot with current day aesthetics,” Kam says. “Everything isn’t always beautiful, or very round and polite. There are also edges and corners. We go out into the street and there are lights and fast-paced moving cars – there is a certain beehive of activity to living in a big city that did not exist in Haydn’s time – that Bartók speaks to. That’s why, to audience members who listen with an open ear, his music often has deep meaning.”

“Bartók deals a lot with current day aesthetics. Everything isn’t always beautiful, or very round and polite. There are also edges and corners.” – violist Ori KamWhich is not to say that the Jerusalem Quartet adheres to a more traditional approach to Haydn. Quite the opposite, in fact.

“Haydn has really experienced a renaissance in the last few decades,” he notes. “Until the 1970s and ‘80s, when performance practice became an issue, the general feeling was there was really no difference between performing Haydn, Beethoven, Brahms or Shostakovich. When you went to hear a great artist perform their music, you got to hear the great artist, regardless of the repertoire.”

Haydn, Kam states, really suffered from that approach. Haydn may have composed in the classical style, but his music is firmly rooted in the baroque era. Baroque composers left a lot of room for performers to interpret their music.

“If a computer plays a piece of Mozart, it still sounds like Mozart,” he asserts. “But with Haydn, that’s not the case. I think Haydn requires artists to give a lot more to bring life to his music than you’ll hear in the beautiful [but ultimately] boring recordings from the ‘60s and earlier. They miss the liveliness that you experience in today’s performances of Haydn, which give him his own voice.”