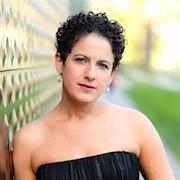 A Joni Mitchell Tribute Lights Up the Back Room in Berkeley

Joni Mitchell, a living legend for several generations of fans across several musical genres, doesn’t do interviews any more. In one of her last, in 2013, she deigned to talk with a journalist from her native country of Canada, revealing how her musical curiosity had ranged far beyond the flowery hippie festivals at which she was celebrated a half century ago.

“Rachmaninoff made a musician out of me,” she revealed. “His Rhapsody on a Theme of Paganini was the piece that sent me into raptures. It was a tender entreaty for the misunderstood ... because my mother never ‘got’ me.” She also discussed the inspiration of her 1972 song, “Judgement of the Moon and Stars (for Ludwig),” and why she was content to be referred to as “Beethoven in drag.” “It was all about his struggles and self-doubts and his worries about how his work was being received, and what it all meant on a deeper level.” Mitchell’s own lyrics dealt intimately and engagingly with love sought, reveled in, and released, and with wider issues of struggle and survival. 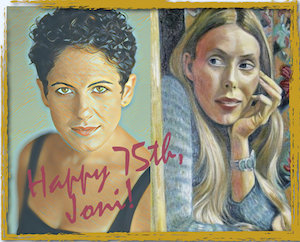 Mitchell herself has made such a deep impression on classically trained soprano Ann Moss that the Richmond-based singer is hosting and performing a tribute at the Back Room in Berkeley on the date of Mitchell’s 75th birthday, Nov. 7. “I often say that she’s the voice teacher I never met,” says Moss, a graduate of the San Francisco Conservatory of Music. “I learned from her a lot, about how to navigate between my upper, middle, and lower registers. And in her writing, she’s always felt to me like an art-song composer, in that you can’t separate the music from the lyrics.”

Moss will be the sole vocalist at the birthday concert for a score or so of Mitchell songs, but she’ll be joined over two sets with numerous instrumentalists, including the d’Pajo gypsy jazz trio, which includes her violinist/violist husband Justin Ouellet; by cellist Emil Miland and harpist Meredith Clark, with whom Moss has worked in the Joshua Trio; by multi-instrumentalist and electronic music programmer Matt Berkeley; and by guitarist Carrie Smith. The program will serve to showcase the broad wingspan of Mitchell’s flights of imagination, as well as the poignancy and credibility of her story-telling lyrics. 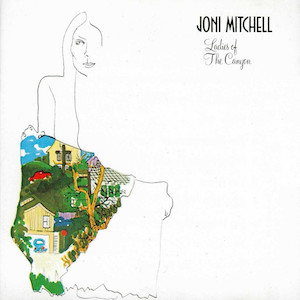 “People seem to have a personal connection to Joni’s music,” says Moss, who’s 42. “I grew up hearing Ladies of the Canyon [Mitchell’s 1970 recording, on Reprise Records], my mother listened to it in our house in Lincoln Massachusetts. But I didn’t really listen to Joni till I was in undergraduate school at Hampshire College, and my friend Koji, who was a really deep thinker, came to my door with two cassette tapes of the double-disc album of Miles of Aisles [Mitchell’s first live album, released by Asylum in 1974]. He just said, ‘I think you’re going to like this.’ I listened to them pretty much nonstop for three years, every time I drove from Hampshire to Lincoln and back, and I cannot think who I would be as a person or a musician if Koji hadn’t brought me those tapes on that day.”

As Moss advanced her vocal studies, she compared what Mitchell had imparted with how the academy wanted to train her instrument. “In the world of bel canto, we were supposed to be aiming to create a mirage that the whole voice is one seamless, perfect instrument that sounds the same, across all the registers. But the more I explored contemporary music, I realized that’s not always what I wanted, it was important to me to feel and sound the different registers as they honestly are. There’s something about the way Joni crosses registers that is very natural, and is now really part of my own teaching philosophy. 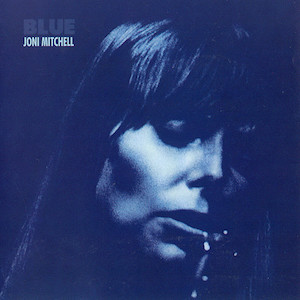 “And another thing I learned from her is how to sing the liquid consonants and nasal consonants, how to sing a long ‘R.’ I think it’s partly her Canadian accent, but I love the way it focuses the voice.” Moss has been programming Mitchell alongside classical material ever since Moss’s 2005 postgraduate recital at the Conservatory, where “song cycles and solo cantatas made up the backbone of my program. I did a big solo cantata of Bach, several song cycles of French, English, and German composers, and then, not a full album side, but five or six songs off of Joni’s Blue [1971, Reprise], looking at Blue as its own cycle. People didn’t seem to bat an eyelash at having her music included on a classical program, and I found that Joni Mitchell fans are everywhere, and they look like everybody.

“I looked at my performances of her as almost ‘historic.’ I did my Bach cantata with Baroque pitch and a Baroque trumpet, I did my Strauss cycle with Steve Bailey at the big Steinway, and when I did Blue, I had a steel guitar and slide guitar players and an acoustic bass player and a hand-drum player. One reason it works for me is that Joni’s music fits my voice very well. Especially on her early recordings, she travels everywhere from F and G below middle C to G and A above the staff in the treble clef. It allows me to use more of my instrument than does most pop music sung by women. What I also find essential is the phrasing, the cadence of her lyric. You realize how many words she fits into a phrase, and yet it seems effortless, inevitable.”

For Moss and SFCV, Mitchell agreed to provide a couple of quick answers to questions from a fellow soprano.

Moss asked, "Who taught you to sing? What did you have to work on?"

Mitchell responded, "I never had a vocal coach. I learned to sing by listening to Miles Davis. I sang along with Miles, to get rid of the vibrato. For more of that influence, listen to the opening chord on the song 'Blue.'"

Moss also queried, "I say to my students, and my teachers have said to me, that when you’re
interpreting a song, you have to have a story inside your head of what that
song means to you, otherwise you’re just a blank slate singing words. Is
this true for you?"

"It’s the words I identify with. It’s like being an actor who’s playing a role," said Mitchell.

Fellow Conservatory alumna, Carrie Smith, who’ll be pairing with Moss on guitar on the second half of the birthday program, has been reaping her own harvest of Mitchell. “I’d forgotten this until I started with Ann, but my sister and I used to play guitar and sing a Joni Mitchell song together when we were 8 and 9, in Toronto,” says Smith, who by chance shares a landlord with Moss in Richmond, Conservatory guitar and early music teacher Richard Savino. As a go-to performer of new music for guitar, Smith was delighted to discover that Mitchell “uses a lot of alternate tunings, which I’ve played in [compositions by] Carlo Domeniconi. I like the different wavelengths it puts your instrument in, it brings out different colors. As a guitarist, Joni would explore the effects these tunings had on her instruments, and it would change her strum patterns.”

After founding the Conservatory’s Hot Air Music Festival and then graduating in 2011, Smith “took a little break from classical guitar rep and started doing a lot more blues and folk, so when Ann approached me, it fit perfectly. I’d loved playing with singers, playing art songs, because I love poetry and literature. And this Joni Mitchell project reminds me of working, say, on the Benjamin Britten Folksongs, where the lyrics really matter. I think because Ann has done so much new music, she’s more invested in the sounds that I’m making than, say, an opera singer would be not really listening for the quality of the notes, and the patterns. And she knows these songs so well, it’s the first time I’ve played with a singer where I don’t have to cue her, at all. And her sense of rhythm, because of the new music, is impeccable. Plus, because she lives so close, we can get together evenings, and grab a couple of glasses of whiskey.”

For her set of four Mitchell songs with Moss, Smith will make use of three different guitars to both feature different sounds and avoid having to readjust a single instrument to Mitchell’s array of ethereal alternate tunings. “For ‘All I Want’ and ‘Sex Kills,’ I’m using a Gretsch steel-string resonator guitar. Particularly for ‘All I Want,’ it brings out that kind of lap harp, Appalachian groove. I settled on my own tuning, which I think Joni would have been all for, which from bottom to top is D, G♭, B, G♭, G♭ (again), and then D♭. I’ve got a capo on the fourth fret, but it only covers the top five strings.

“For ‘Circle Game,’ I’m playing on a pretty, hand-made spruce-top classical guitar, from a maker up in Portland named Paul Weaver. For ‘Help Me,’ I’m playing an acoustic steel-string Recording King guitar, where I have to put a third string where my fourth string would be, because I have to tune up so far. In terms of technique, ‘Circle Game’ is very classical, ‘All I Want’ is very back-and-forth. For ‘Sex Kills,’ Joni created her own slap-and-strum technique.”

If she had in-person time with Mitchell, Smith would want to hear “her opinion about being a woman who’s an innovative guitarist, because it’s still such a male-dominated world. I’d also like to hear more about her as a [visual] artist, since I’m getting back into that world, which was so important to me when I was younger.” The birthday project has inspired Smith to continue collaborating with Moss “on some classical rep,” and to “write some of my own stuff in those alternate tunings.”

Moss, who’d like to record a full album of Mitchell someday, is grateful to have been able to “take permission from her to make her material mine. There’s something about her songs which I think is less about her as a person than about her music, and I’d like to think she prefers it that way. It doesn’t strike me that she’s the kind of person who wants people to ‘fan out’ over her. But I think her songs themselves become our own, because everyone has their own stories for these songs, which came out of personal stories for her.”

New albums show contemporary musicians and groups can do rock and folk and classical well.

New settings of the Nobel winner’s classic songs raise philosophical questions about the relationship of text and music.