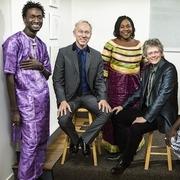 This year’s fifth Kronos Festival is the first in which Ethiopian-born, San Francisco-based vocalist and songwriter Meklit Hadero will be a participant, and she’s psyched about it. “It’s a show where I just get to be in love with everybody,” she laughs.

Hadero will be one of five Voices of a People’s History, a tribute to the late historian Howard Zinn, on Thursday, May 30, the first of the Festival’s three days at the SFJAZZ Center. She’ll return on June 1 to sing a song inspired by the late folk icon Pete Seeger, who would have turned 100 this month. David Harrington, founder of the Kronos Quartet, sees the inspirations for and the artists featured in this festival as “adding up to a vision of courage and forthrightness” that “won’t back away from the smallness of thought and vision that you see all over the place now. Instead, you’ll see lots of empowered women doing great things, and you’ll see people and hear music from many corners of the world,” much of it underscored by the 45-year-old Kronos ensemble which features Harrington and John Sherba on violins, Hank Dutt on viola, and Sunny Yang on cello.

Kronos and Hadero have long admired each other. “They’re wonderful at supporting the deep meaning of a song,” says the singer/songwriter, “and that’s what they do regardless of the genre they work in, because they’re so flexible.”

“There’s a particular song, which I heard Joan Baez sing, called ‘The President Sang Amazing Grace,’” notes Harrington about Zoe Mulford’s musical tribute to Barack Obama’s eulogy for victims of the 2015 church shooting in Charleston, South Carolina. “I could imagine Meklit singing it,” says Harrington, “and it’s a representation of the kind of thing Pete Seeger believed in, the power of handmade folk music to propel us. That song would not exist, in my opinion, without Pete and all the work he did during his lifetime.” Seeger passed in 2014.

Harrington’s connection to Howard Zinn, who passed in 2010, dates back to Kronos’s having provided music, four years earlier, underscoring interviews of Zinn by David Barsamian at Carnegie Hall. The historian later launched his Voices project as an adjunct to his highly regarded A People’s History of the United States, which provided an alternative account of the nation’s development, referencing the treatment of indigenous people and slaves, and the influence of capitalism on economic and political development.

For the festival, says Harrington, “we’ve invited [political commentator] Rebecca Solnit to speak some of Howard’s words. We’ll also have [Oakland-born actor and poet] Michael Turner III speaking some of Martin Luther King’s words.” Folksinger Lee Knight and San Francisco Girls Chorus Artistic Director Valérie Sainte-Agathe will also count among the Voices, and Hadero, who is also a TED fellow and is developing a podcast, will read what she describes as “a poem by Marge Piercy about the power of collective.”

“We’ve never done anything quite like this before,” claims Harrington, in trademark fashion. “We’ve tried this out in rehearsal, where we had several activists come and speak to us and our staff, where we were using special music under certain words, and we liked the way it felt. But we’ve never done it in public.

“Also on that first night,” he continues, “there’ll be a piece by Stacy Garrop [Glorious Mahalia] that is the voices of Studs Terkel and Mahalia Jackson, who were close friends and did interviews over the years, their conversations about race. In terms of the way [Jackson] speaks about things, there is an undeniable truth to everything that she says, and that’s the kind of voice we need in our concerts these days. These two friends had a lot to do with breaking down the color line in American broadcasting.

“And there are several world premieres. [On Thursday] there’s Missy Mazzoli’s Enthusiasm Strategies, which is just exquisitely beautiful, and Mark Applebaum’s Flashlight. He’s made a piece unlike anything we’ve ever played before, really delightfully weird. There are quite a few props, various sound makers, and ways of approaching ensemble playing and the staging of a concert that are unique. We’ll be playing music by Jlin [arranged by Jacob Garchik], who’s an electronic musician from Gary, Indiana, who has never heard us play her piece live.”

Those three pieces were composed for later inclusion in Kronos’s Fifty for the Future project, which, Harrington points out, allows professional and amateur quartets to “stream our performances, download the scores and parts, and, with your own quartet, start playing that music tonight. So far, the first 25 pieces have been downloaded nearly 14,000 times, by quartets from 86 countries. On tour, we’ve coached at least a hundred groups, including some in Poland, the U.K., France, Canada, Singapore, and all over the U.S., it’s become a regular part of our work.

“We’re getting rejuvenated and inspired by what we’re hearing young people do. Just last week, two groups from Santa Rosa played before our concert at the Green Center. And two groups from the Ruth Asawa School of the Arts will be performing as part of the festival. Their Dragon String Quartet will open the festival [with Rhiannon Giddens’s At the Purchaser’s Option, about the auctioning of slaves], and they have a saxophone quintet. Each of us has coached these groups several times.”

Opening night will also feature Michael Gordon’s Exalted, with the San Francisco Girls Chorus, and Fatimah Al-Zaelaeyah’s Ya Mun Dakhal Bahr Al-Hawa, music from Yemen that’s part of the Quartet’s “Music for Change: The Banned Countries” concert series. “It started out as vocal music,” Harrington says of the latter piece, “and in this case, Sunny [Yang] becomes the voice. We found a special bow for her, that’s like the very thin limb of a tree, that we used in another piece, music from the Uyghur region of China, and it sounds fabulous on the cello. The other three of us will be playing kitchen instruments.”

Friday’s program will include compositions by Fodé Lassana Diabaté, Sigur Rós, and Jherek Bischoff (with the composer on bass guitar), as well as a collaboration with “freak folk” duo CocoRosie that will feature the Girls Chorus. There’ll also be a film, Por Vida, by Sam Green, who also co-created A Thousand Thoughts, a documentary about Kronos. This one celebrates San Francisco’s Casa Sanchez and its practice of supplying burritos for life to patrons who display a tattoo bearing the restaurant’s logo. Kronos will supply a live soundtrack.

See the trailer for A Thousand Thoughts below:

Saturday morning and afternoon will feature a family concert and “labs,” involving, among others, ethnomusicologist Lucy Durán and the Girls Chorus’s Sainte-Agathe, who’s also Kronos’s current artist-in-residence. “I hope people will bring their kids,” Harrington urges, “though kids are welcome at all the concerts.” A grandfather several times over, he expects three generations of Harringtons to be present.

The Quartet and folk artist Sam Amidon will start Saturday evening with Nico Muhly’s arrangements of traditional songs, several of which appeared on the 2017 Nonesuch album Folk Songs. The Girls Chorus will premiere the choral version of Aleksander Kościów’s Hilathi. And Hawa Kassé Mady Diabaté, lead singer of the Malian Trio Da Kali with whom Kronos recorded Ladilikan (World Circuit, 2017) will lead the Girls Chorus in her Tegere Tulon, for which she’s instructed them in her country’s tradition of clapping songs.

Following will be longtime Kronos arranger Jacob Garchik’s Storyteller, “original pieces using elements of Pete Seeger’s voice and music,” notes Harrington. “Then we’ll end the festival with a set of songs that Seeger either brought to America or wrote himself or were inspired by his life and work. There’ll be ‘Wimoweh,’ ‘Turn, Turn, Turn,’ ‘Where Have All the Flowers Gone,’ and ‘We Shall Overcome,’ which we ended our festival with last year and was one of those unforgettable moments in concertizing. Seeger is a man whose music I listened to when I was kid, whom I played for my kids when they were growing up, and whom I now play for my grandkids, and my daughter plays in her third-grade classroom. He just keeps getting larger and larger as time goes on.”

“Right now, in this historical moment,” adds Hadero, “it has become ever more important to sing songs that have deep meaning, that bring people together around substantive issues. It’s taken on a different sense of urgency. And with Kronos, we can be who we are and find common ground.”

Artists and scientists collaborate in a festival of ideas about the next frontier.