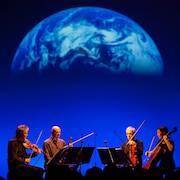 Advocating for freedom is nothing new to Kronos Quartet founder David Harrington. He was doing so even before, close to 47 years ago, he founded Kronos in order to play George Crumb’s string quartet, Black Angels, a searing parable about contemporary reality that focuses on the realities of the Vietnam War. That Harrington’s political commitment is shared by his fellow ensemble members is reflected by Kronos’ numerous collaborations with international artists of color, its inclusive programs for young artists and the disadvantaged, and decades of performances that address the issues of our time.

Take, for example, The ’60’s, The Years That Changed America, Kronos’s Jan. 15 concert at Stanford Lively Arts’s Bing Concert Hall. The choice to begin with a seminal piece of minimalism, Steve Reich’s infinitely variable Pendulum Music (1968), seems to signal an intention to sow the seeds for the pendulum’s swing back to an era where attaining freedom was a high priority. The remainder of the program addresses the legacy of gospel great Mahalia Jackson and the state of civil rights in 2020, when American political discourse has taken a decided turn toward the uncivil.

Harrington was in an especially political mood on the fall afternoon we met in an Inner Sunset Café for a chat. Having turned 70 on Sept. 9, the lanky grandfather and new dog owner came across as a farmer philosopher whose manner of deeply pondering his words while speaking slowly and softly brought to mind the image of one of his idols, singer / activist Pete Seeger.

“It’s very, very tempting to get swallowed up in the storm of our current occupant of the White House,” Harrington said. “It’s like this great big sucking machine. Everything that the music I play stands for is in direct contradiction / counterbalance to what he and his administration stand for.

“I’m looking for the strongest music, and the strongest possible relationships with other musicians and music that Kronos hasn’t been a part of before. I think if you add all of these conversations, experiences, relationships together, it’s possible, even in the time we’re in, to feel optimistic about the future and about the power of work that people can do together.

“The heroes of our time are Greta Thunberg, the kids in Florida, kids my granddaughter’s age. They have a lot responsibility, but they also have a lot of vision. And then it’s our teachers.

“My daughter, a grade school teacher in a San Francisco public school and her friend, who teaches at Monroe Elementary, have classes that are pen pals. They’re using elements of 50 for the Future [Kronos’s commissioned, teaching repertoire for young string quartets and musicians] to teach music to children, and they’re creating a pilot program. This year we’re playing for the third graders in the two schools. As time goes forward, I want to have this music available for all the third graders in San Francisco. Third grade is when kids decide if they want to play a musical instrument in fourth grade.

“Kronos is working with Sunset Youth Services’ after school community center music program for at-risk teenagers. The place has such positive vibes. These young people are taking the first 25 Fifty for the Future pieces and remixing them. I heard the first remix this morning, and I thought, ‘Yes, this is going in the right direction.’ So, what’s his name in Washington can try to do whatever the hell, but we also have to do what we have to do.

“A year and a half ago, we had just performed our piece celebrating the ‘I Have a Dream’ speech of Martin Luther King, Jr. Most people don’t know that Martin Luther King, Jr had a speechwriter, Dr. Clarence B. Jones, who is now in his 80s and Stanford Scholar in Residence. Clarence, who was a Juilliard-trained musician, became MLK, Jr’s researcher, lawyer, and eventually, in the middle ’50s, speechwriter.

“When I spoke with Clarence, he told me that when Martin got depressed, he said, ‘Get Mahalia Jackson on the phone.’ Mahalia became Martin’s muse: Clarence remembers seeing Martin Luther King Jr in the corner with the phone to his ear, big tears rolling down his cheeks, as Mahalia was singing to him.

“Fast forward to August 1963. The night before the speech, Martin Luther King asked Clarence to put his thoughts together for the next day. The day comes, Mahalia has sung and is sitting behind King to his right while Clarence, I think, is behind the stage. The first seven or eight paragraphs King spoke were word for word what Clarence set.

“At a certain moment, after the speech veers toward other topics, Clarence hears Mahalia yell out, ‘Martin, tell them about your dream. Tell them about your dream, Martin.’ The greatest gospel singer in the world, who knew him very well, wasn’t hearing what she needed to hear. If you watch the video, there’s a certain point when King moves his papers over and looks out. That’s when his speech becomes the speech.

“About a year and a half ago, we got Clarence into the recording studio and recorded the whole story. A day or two later, Clarence was with us in my daughter’s class when we were playing ‘We Shall Overcome,’ which Pete Seeger popularized in the ’60s. Clarence was completely overcome. We wanted him to come up and lead everyone in it, but he couldn’t do it.

“After we did ‘We Shall Overcome’ with the 44 kids, the other teacher, Mark Rosenberg, said to me, ‘You know, tomorrow is Pete Seeger’s 99th birthday.’ When I heard him say that, I decided to do a Pete Seeger project. So we got the American Folk Life Center at the Smithsonian to help us. We just performed it for the first time in September. We did all these amazing songs, concluding with “We Shall Overcome,” and we spent the next two days recording. Hopefully there will be something available soon.

“On Jan. 15, when we play at Stanford, it’s Martin Luther King Jr’s birthday. We’ll perform part of a Mahalia piece by Zachary James Watkins that includes Clarence’s voice and — this gets us back to Pete Seeger — we will also perform a piece by Stacy Garrop that includes the voices of Mahalia Jackson and Studs Terkel, who interviewed her.

“We’re really lucky to have worked with people like Henryk Mikolaj Górecki, who was with us during rehearsal, who have changed our ideas of what our instruments can do. We played with Astor Piazzolla — we did the last record with him — Alim Qasimov, the Azeri singer, Tanya Tagaq, Wu Man, Terry Riley, and Zakir Hussain. All these experiences have enlarged our sonic vocabulary and enabled us to change our sound to sound like so many things.

We found a way to sound like Mahalia Jackson’s harmonium in the church in New Orleans. It took us 40 years, but now we know how to do it. When we’re playing Terry Riley’s Sun Rings [Kronos’ recording is currently in the running for a Grammy Award for Best Engineered Album, Classical], it helps to have played Indian music as well as Terry’s other music. We start adding all of these things together, and a lifetime of music benefits our sound.”