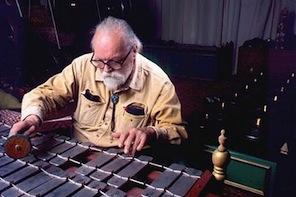 A musical miracle is about to unfold in Berkeley. Eleven years after the death of one of America’s great, irrepressible iconoclasts, composer Lou Harrison, one of his long-forgotten early piano pieces is about to get what may amount to its second airing.

Harrison’s four-page, handwritten manuscript of the work, titled Dance for Lisa Karon [sic], was made in 1938, when he was 21 and writing many pieces for dance. Earlier this year, Daniel Katz of San Francisco wrote to UC Santa Cruz Professor Leta Miller, one of Harrison’s biographers, and then to Berkeley pianist Sarah Cahill, to announce that he had found the MS in a box of sheet music belonging to his father-in-law, Allan M. Lee. Lee had been friends with Lisa Caron (aka Alice Reawold — Harrison misspelled her surname), who once taught at Estelle Reed’s dance studio on Geary Boulevard in San Francisco.

It seems that Caron/Reawold was the childhood piano teacher of Katz’ future wife, as well as a friend of the Lee family. As far as we can tell, the long-forgotten score, perhaps titled DANCING!, may have become the basis for a work called Carnival that was performed in a dance concert at the Reed studio on April 2, 1939.

Cahill will resurrect the piece in a remarkable concert of Harrison’s work on May 25 at the Berkeley Art Museum/Pacific Film Archive (BAM/PFA). Thanks to the generous support of New Albion Records, which has recorded many of Harrison’s greatest pieces with the artists for whom they were written, some of those same artists will be on hand to perform several seminal pieces from Harrison’s vast oeuvre. Chief among them is La Koro Sutro, Harrison’s major work for 100-voice chorus, with American gamelan, harp, and organ.

The concert is also made possible, in part, by percussion genius and Mills College instructor William Winant, for whom Harrison wrote numerous works. Winant, who was a high school student when he first made contact with Harrison, subsequently studied under him as a graduate student at Mills, and became his graduate assistant.

“Lou was a hero of mine in high school and in college,” Winant reports. “I’d been listening to and playing a lot of his music as an undergrad. I’d also corresponded with him when I was at Cal Arts, and met him a couple of times. It was just a happy coincidence that when I was at Mills, they had made him the Milhaud Professor.” The association led to a friendship and a host of collaborations. After the two men began working together on a daily basis, Harrison began composing pieces for Winant. Because Harrison often wrote for specially designed instruments that he and his partner, Bill Colvig, invented and built, Winant had to borrow the instruments in order to perform authentically.

A musical miracle is about to unfold in Berkeley.

Eventually, when Harrison died, he made good on his promise to will the instruments to Winant. Some of them, now stored at Mills and at UC Santa Cruz, will be heard in the concert.

In addition to Cahill’s performance, Winant will unite with pianist Julie Steinberg and violinist David Abel for the irresistible Varied Trio that Harrison composed for the Abel-Steinberg-Winant Trio. Winant will also perform Solo for Anthony Cirone, adapted from the puppet play/opera Young Caesar. After its premiere, it, too, lay unplayed until Winant recorded it at Harrison’s home only a few months before he died. (You can hear it on the New Albion recording Drums Along the Pacific.)

“Out of the ashes rises the Phoenix, and out of the junkyard of industrial waste Lou creates this beautiful music.” – William Winant

After intermission comes the first major work by Harrison that New Albion recorded in 1987, La Koro Sutro. Doing some of the honors will be the UC Chamber Chorus (heard on the recording), as well as the chamber chorus Sacred and Profane and the USF Classical Choral Ensemble, all conducted by Marika Kuzma.

“La Koro Sutro is a beautiful culmination of Lou’s early non-Asian percussion works, and combines writing for Western percussion instruments with his interests in Eastern and world music,” says Winant. “You see these beautiful instruments that he made out of junk we throw away — plumbers’ pipes and trash cans and oxygen tanks. Out of the ashes rises the Phoenix, and out of the junkyard of industrial waste Lou creates this beautiful music. The piece encompasses ideas from many parts of the world, both in the texts — the whole notion of Esperanto as an international language to bring people together — and also the fusion of Western techniques with techniques from the Orient to create this incredible, huge masterpiece.”