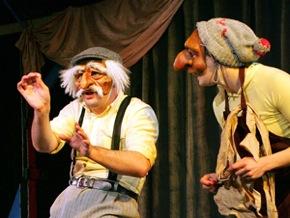 No one can accuse the Baroque ensemble Magnificat of lacking a sense of drama. Back in 2009, the ensemble made an unlikely pairing with the Carter Family Marionettes in Francesca Caccini’s La Liberazione di Ruggiero dall’ Isola d’Alcina. In its upcoming March 18-20 concert set, a staging of Orazio Vecchi’s madrigal comedy L’Amfiparnaso (The Twin Peaks of Parnassus), Magnificat continues the theatrics by collaborating with three theater artists from the Dell’Arte Company for what’s sure to be a high-spirited affair.

Madrigal comedies — collections of madrigals strung together by a common narrative — enjoyed a brief vogue in late 16th-century Italy, and L’Amfiparnaso ranks among the genre’s masterworks. This collection of 14 five-voice madrigals tells a conventional love story in the commedia dell’arte tradition, with plenty of good humor thrown in. As Joe Dieffenbacher, one of the three Dell’Arte players, observes, “The commedia style is known for its bawdy, rough-and-tumble humor. The madrigals are quite lovely, the voices sweet and playful. Together, Magnificat and Dell’Arte will present a show that marries the best of both.”

Staging was not part of Vecchi’s original plan; to the contrary, the prologue to L’Amfiparnaso calls the collection “a spectacle which is witnessed through the imagination, that penetrates the ear and not the eye.” But contemporary composers like Banchieri did stage their madrigal comedies, and for modern audiences a dose of theatrics makes the puns and other cultural references of Vecchi’s time easier to understand. “At the time when L’Amfiparnaso was written, commedia was one of the most popular theater forms in Italy, so combining the madrigals with this very physical style of theater was inevitable,” says Dieffenbacher. “The audience is given a treat for the ears and eyes: fine music and the visual play of masked and colorfully costumed characters, with a few acrobatic tricks thrown in.”

L’Amfiparnaso’s cast of characters includes Pantalone, a man Magnificat’s blog describes as “an aging Venetian Magnifico who is by turns avaricious, suspicious, amorous and gullible.” He intends to marry off his daughter Isabella to the bumbling lawyer Doctor Gratiano, whom Vecchi characterizes as a “blockhead who answers badly and hears still worse.” Needless to say, Isabella will ultimately choose another, her true love, Lucio. The mockery of another character, the Spanish-speaking braggart Captain Cardon, carries thinly veiled parallels to Italy’s contemporary political situation. (Much of modern-day Italy was under Spanish control during Vecchi’s lifetime.)

The three Dell’Arte performers all boast impressive international credentials. Oxford, England-based Dieffenbacher is artistic director of nakupelle, a theater company specializing in circus, clown-and-mask, theater style. Stephen Buescher is the movement instructor at American Conservatory Theater, and is cofounder with artist/actress Emilia Sumelius-Buescher of Workhorse Productions. The costumes are by Nina Silfverberg, of Finnish descent, who received a grant from the Finnish government specifically for this project.

Though working with early music is terra incognita for Dell’Arte, the performers have a good handle on how to make things work. “This is our first time working in partnership with a Baroque musical ensemble, and we are very excited by the marriage of Magnificat’s work and Dell’Arte’s,” says Dieffenbacher. “The big difference between this and other performances is that we are playing in pantomime while the ensemble sings the lines of the characters. We have to try and match our actions to their vocals, as well as offer the audience a playful commedia scene in its own right.”