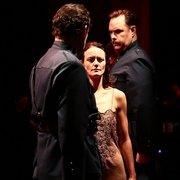 Mata Hari was a strong woman. While awaiting execution for being convicted (many think wrongly) of spying for the Germans during World War I and having refused to be blindfolded or tied to the podium, she blew a kiss to the firing squad. What kind of woman does that?

Known to most as a beautiful exotic dancer, seducer, and spy, Mata Hari (born Margaretha Zelle) struck director Paul Peers as a fascinating subject. So he decided to write an opera libretto, and enlisted Matt Marks, a young composer who recently passed away, to write the music. The opera is being presented by West Edge Opera at their latest industrial space-turned-theater, the Craneway Conference Center on the waterfront in Richmond. Their 2018 season features two other operas, Debussy’s Pélleas and Mélisande and Quartett by Luca Francesconi, both of which also center around a strong female character.

West Edge’s general director, Mark Streshinsky, discovered the opera at the Prototype Festival in New York last year, where it premiered. He said he was amazed by it, and was especially impressed with Tina Mitchell, who plays the lead. He immediately inquired about bringing the show — and Mitchell — to the Bay Area.

“I liked the idea of learning something about a historical figure that I had heard about, but didn’t know very much about,” says Streshinsky. The show also fit a lot of his other criteria for choosing productions, including scale, budget, and uniqueness. “I really value taking a risk,” says Streshinsky. “Sometimes a risk can be wildly successful, sometimes not so much, but you can’t stop taking those risks.”

The show was written in budget-conscious mode: It’s scored for just four instruments, violin, electric guitar, piano, and accordion, and includes an electronic click track, which uses synthesizer to create some melodic lines and drumming. The music itself is bold and eclectic and embraces styles ranging from punk rock to a waltz. The set is sparse, and the staging features sliding fabric screens used for colorful projections.

Interestingly, the lead character, Mata Hari, doesn’t sing. She only speaks. “English is a hilariously difficult language to pronounce and sing in,” says the show’s conductor Emily Senturia. “It is complicated music because so much of it is written to be in a speaking style.” And this is deliberate. While developing the show, Marks discovered a way to score the entire opera, including the dialogue, so Mata Hari actually speaks her lines in a specific rhythm. “Sometimes she is speaking in 3/4 time,” says Peers, “and there are specific scenes where she has to take a breath on the downbeat, and then say a line, and that really gave it structure and energy.”

A lot of research went into the libretto, which was director Peers’s first foray into writing. “I had this vision for the piece and I wanted to give writing a go,” he says. In addition to reading several historical books about Mata Hari, he actually went to Paris and was able to obtain and view her military dossier. “It was wonderful to go through the documents which revealed facts that inspired scenes in the opera.

“A lot of people don’t know much about her and don’t realize that she grew up in Holland,” he continues. “And that was one of the things I wanted to do as a writer, to peel away all those icons everybody thinks she is and expose the human underneath it.” So he structured the piece episodically, showing the different roles in her life: as a prisoner, as a mother, as a wife, and as a lover. He also dives into some of her darker secrets, like the fact that her husband was a drinker and a womanizer who gave her syphilis, and that she took mercury to ward off the symptoms. Peers says that when she was under investigation for espionage, the police found mercury in her hotel room and construed it as invisible ink being used for spying; loose evidence that they wove into the piece.

Peers met composer Matt Marks in 2010 at a performance of one of his compositions, Albert Fish, a song cycle based on the letters of a serial killer, a subject that was especially dark and dramatic. Peers says he was impressed with Marks’s ability to understand human drama and to write for the human voice.

“I had Mata Hari in mind as a topic already at that time, because the lead, Tina Mitchell, a fellow Australian, was moving to New York City and we wanted to work together.” The concept was that Tina, an actor but not a singer, would play Mata Hari, just as a speaking role. This would be a challenge for a composer, but when Peers approached Marks with the concept, he was really excited about it.

Mitchell says that Peers saw her in a show in New York and told her he wanted to do a piece with her. “I am very passionate about telling women’s stories and this one is really complex,” she says. “If you read her story, it is incredible. Everything that has ever been made or written about her has only portrayed the femme fatale, the woman using her sexuality to get through in the world, and glorifying this whole espionage thing, but there was this whole side of her that nobody knew. She just never gave up, and I loved that strength.”

When Mitchell returned to New York, she did a lot of her own research, and helped Peers to “cipher out the bits that were really juicy and important,” and they did workshops to fully flesh out the show. “The idea was always to have movement and very strong physicality to tell the story,” says Mitchell, adding that she even told Marks, “you need to put very strong obstacles in the music for me to bat against, so that the energy I bring matches the energy that the singers bring.”

Peers is sympathetic to Mata Hari and believes that she was used as a scapegoat by the French military, who targeted her because she was a strong, independent woman in a male-dominated culture, a topic that resonates more than ever today.

“Essentially, it is a kind of dance of death,” says Peers. “That was the concept I was thinking. She was a dancer, and she dances with all of these people in her life and she dies at the end.”

Cyril Deaconoff’s The Last Tycoon is the standout in an evening of exciting excerpts that left listeners wanting more.

Libby Larsen’s operatic adaptation of Shelley is less than riveting in a confusing production.