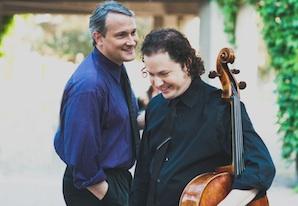 Well-attuned to the listening habits of the iPod-and-beyond generation, cellist Matt Haimovitz has teamed with pianist Christopher O’Riley on a project that further bridges the fabled divide between the so-called camps of classical and pop music. In yet another step in Haimovitz’s pioneering efforts to expand classical music beyond the concert hall’s walls — he was perhaps the first classical artist to haul his cello into rock clubs and to record covers of Jimi Hendrix and the like — he and O’Riley are following up the fall release of their two-disc album/download, Shuffle.Play.Listen, with a multicity tour.

Even before they hit the Big Apple (and Lawrence, Kansas), the two intentionally begin their journey in Yoshi’s San Francisco, just north of Apple’s trend-setting Silicon Valley headquarters. Their evening will feel right at home in a room that has seen other genre-blurring efforts from Gyan Riley, Simone Dinnerstein, and Tiff Merritt, not to mention countless others.

Shuffle.Play.Listen is a listening experience all its own. Beginning with Bernard Hermann’s Vertigo Suite, composed for the great thriller that Hitchcock set in San Francisco in 1958, Haimovitz and O’Riley shuffle from the immensely engaging, forward-looking classical music of Janácek, Martinů, Stravinsky, and Piazzolla to art pop-songs by Arcade Fire, Radiohead, John McLaughlin (of the Mahavishnu Orchestra), Blonde Redhead, Cocteau Twins, and A Perfect Circle. The trip is far more unified than you might think, thanks to O’Riley’s extraordinarily effective arrangements and the duo’s brilliant programming acumen. All the music sounds as if it belongs together, which indeed it does.

“Jason, you live in an area [Northern California] that is in large part responsible for the complete shift in how people listen today, compared to 10 years ago,” the cellist declared in a conference call with the pianist and me. “Because of the iPod and iTunes, people have access to so much music, anytime they want it, in all genres. You can experience some of the same harmonic and rhythmic ideas, whether you’re playing Janácek or Radiohead.” 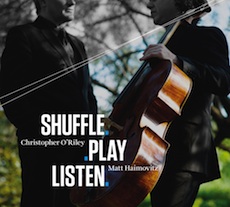 O’Riley, who for the past decade has championed young artists and new music on his NPR radio show, “From the Top,” feels the duo is in a perfect position to say that, if you like Martinů’s Variations on a Slovak Folk Song, you’re also likely to enjoy John McLaughlin’s The Dance of Maya. In truth, if you engage in wholesale shuffle-playing of this disc, you may not know just who is who or which is which.

“The irony of our title,” Haimovitz blurted out between bursts of laughter, “is that we actually don’t really want you to shuffle the CD’s titles; we want you to listen in the order presented. ... We put a lot of thought into the order, even on live programs. On the surface, it seems schizophrenic. But there’s definitely an emotional trajectory that we’re going for.”

For those who know their wonderful Billboard-charting CD, the new order of their Yoshi’s concert will add another dimension to the journey. And fans in attendance can only hope for other surprises.

“We were recently honored by fan mail from Kim Novak,” said O’Riley. “It would be a dream [for us if she would] lend her slender index finger to damp the piano strings for ‘Carlotta’s Portrait.’”