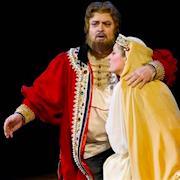 The contrast couldn’t have been more palpable: On one hand, a grand, dramatic, majestic opera; on the other, a bare, low-ceilinged rehearsal room in the Davies Hall Zellerbach annex.

And yet, this early chorus rehearsal for the San Francisco Symphony’s upcoming presentation of Mussorgsky’s Boris Godunov is typical of the beginning of all opera productions as the many strands of this most demanding and multifaceted genre are pulled together, and the “product” is built, brick by brick.

SFS Chorus Director Ragnar Bohlin is leading the rehearsal — soft-spoken, courteous, collaborative as always, so different from the image of a typical chorus director — as his 80 choristers first speak the text (following Bohlin’s Swedish-accented Russian), then shaking the room with the sound of a despairing chorus that translates to:

Everywhere
Boris has his henchmen,
who torture
innocent people!

The dramatic scene is near the end of Mussorgsky’s 1873 opera, based on Aleksandr Pushkin’s chronicle of the czar who ruled first as regent for Ivan the Terrible’s deranged son Fyodor, dubbed “the Bellringer” because he was obsessed with religion and rang church bells whenever he could. Godunov then supposedly killed Ivan’s other son Dmitry and reigned from 1598 to 1605. He was succeeded by a pretender claiming to be a death-defying Dmitry.

Even among operas with a tortuous history of versions and revisions, Boris stands out with a dozen major performance versions and many local tweaking of those. Perhaps the most famous variable is the inclusion or exclusion of the “Polish Act” — definitely out of the SFS production.

Boris productions run as long as over four hours with three intermissions (especially in Russia’s Bolshoi and Mariinsky theaters) or as short 2 ½ hours with one intermission. San Francisco’s will be at the short end, with an 80-minute first half and a 35-minute second half; add a 25-minute intermission and you’ll be out before the intermissionless Das Rheingold across the street at the San Francisco Opera’s Ring cycle is done.

The chorus, says Bohlin, sings “around 45 minutes total, so it’s a big sing for us,” although light duty against the SFO Chorus’ two hours of music in Les Troyens.

As to “which Boris,” Bohlin says “We are doing a fusion of two versions. For example, we are doing the Kremlin scene with Boris’ death from the first version, also the Forest of Kromy scene from the second version, but there will be no St. Basil scene.”

Sixteen singers will be acting onstage and the chorus will sing from the terrace, similar to the staging of Peter Grimes.

Just as this will be Michael Tilson Thomas’s first time conducting Boris, Bohlin too will make his role debut. He was chorus master at the Stockholm Opera for a brief time before turning to symphonic literature, working on Tannhäuser, The Magic Flute, Carmen, The Fiery Angel, among others.

Another newcomer to the opera is stage director James Darrah, a young veteran of much-acclaimed collaborations with MTT here of Peer Gynt in 2013, Peter Grimes in 2014, the Beethoven Missa Solemnis in 2015, and On the Town in 2016. Although those productions have all been advertised as “semistaged” — as is Boris now — Darrah holds the view that performances are either staged or not, “nothing ‘semi’ about it.”

Contemplating the task before him, Darrah says:

The chorus will be “on book” — holding their scores — but several very talented chorus members fill in small roles and they’ll be memorized. The SFS Chorus is fantastic, so if we can do any slices of the final Kromy scene memorized, we will. MTT has shaped chorus numbers and usage very well, but I can’t move them around much — no time and no logistical way for that to occur with scores, sightlines, etc., without a compromise to musical integrity.

Asked about several recent “anti-Putin,” politicized productions of the opera, Darrah promises “No Putin or Trump appearances in the evening. I see why it would be tempting, but isn’t the genius of the piece its prescience? Too heavy-handed modern sledgehammering of that idea destroys the beauty and heartache of the piece, I think.”

The cast for Boris will have notable Russian guest artists, led by Stanislav Trofimov in the title role, Yevgeny Akimov as Prince Shuisky, Aleksey Bogdanov as Shchelkalov, Maxim Kuzmen-Karavaev as Pimen, Sergei Skorokhodov as Grigory, Vyacheslav Pochapsky as Varlaam, and Stanislav Mostovoy as the Holy Fool.

The production will also have Andrew Brown’s Pacific Boychoir, and five actor/dancers choreographed by Christopher Bordenave. Alexandra D. Amati presents the Inside Music talk in the hall one hour prior to concerts.

Another milestone in the history of American showmanship hit Walnut Creek’s Hofmann Theater last Sunday and Tuesday: California Symphony's claim to the world’s first presentation of a 3-D video to accompany — or rather, subordinate — a live performance of a symphonic work. The plea for more funding that followed was justified by the quality of the previous numbers on the program.