Haven’t laughed out loud during a brass concert before? Mnozil Brass is here to change that.

With its signature vitalizing blend of music and mania, each performance by Austrian septet Mnozil Brass brings jazz, folk music, classical arrangements, and party songs — with hearty helpings of slapstick humor, creative sketches, singing, dance numbers, and horseplay. Trained at the Vienna Conservatory, members perform on an assortment of trumpets, trombones, and tubas. Yet, while players show off their virtuosic chops, it’s far from an austere Austrian brass concert: it’s a self-described “environment of controlled chaos” and a rollicking good time.

A quick internet search reveals a panoply of creative antics. Their most popular video, where players open a set unleashing a cacophony of animal noises — from sheep bleats to chicken clucks — and then lapse into singing before performing the William Tell Overture, has garnered 1.7 million views on YouTube. Think Monty Python meets virtuosic brass performance.

The septet’s latest show, Cirque, comes to Cal Performances on March 21. [Editor’s note: This event has been canceled, following ongoing concerns about the novel coronavirus in the Bay Area.] As the group approaches its 30th anniversary since its founding in Vienna, they say Cirque was a natural next step in their artistry. “A circus is the dead-on description for what we do for a living,” says Mnozil Brass member Thomas Gansch. “We travel around from town to town to entertain audiences around the world. Our music is sometimes exciting like acrobatics, surprising like the illusion of a magician, or melancholic like the white-faced clown. It was the perfect match!”

Gansch also adds that Cirque is the first show to focus more deeply on music. “Other shows were more focused on schticks and tried to shout ‘Funny!’ in your face. This one has more to offer,” he says. The players cull from many different musical styles, traditions, and influences to create one show. “We always try to bring as many styles to the table as possible in order to keep it fresh for ourselves,” says Gansch. “If you play a show for a long period of time you need to still love it on night 187 as you did on premiere night!”

The group takes its name from a Vienna establishment named Gasthaus Mnozil. Situated across from the Vienna Conservatory where the players studied, the pub was where the founding members began performing at open mic in 1992. From there, they regularly jammed, playing oompa music and Austrian and Bohemian traditional tunes.

There, they also honed their gifts for working the crowd. “We learned the entertainment stuff right from the start,” says Gansch. “The better we would work the crowd the more drinks would come to the stage. That hasn’t changed, metaphorically!” 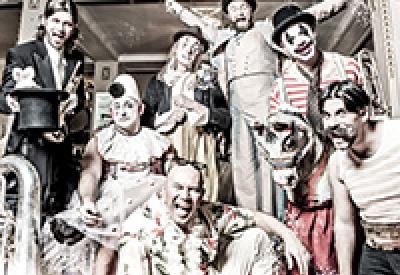 The septet featured music by Maddalena Casulana and Clara Schumann in a concert that was a little too firmly rooted in the past.