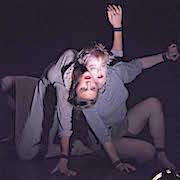 Sometimes, a story is so all-encompassing and universal that modern issues can be grafted onto it as if they were there all along. This is definitely true for Brisbane (Australia)-based Circa Contemporary Circus and the 2016 Barbican premiere of Il Ritorno, the group’s adaption of Homer’s The Odyssey and Monteverdi’s Il ritorno d'Ulisse in patria, which comes to Berkeley this weekend via Cal Performances.

The notion of mixing Baroque opera with modern circus arts might seem bizarre, but, as Natalie Murray Beale, the production’s music director, and Nathan Boyle, an ensemble member, talked about the show’s inception, the combination seemed inevitable. Both noted that at the time of the show’s premiere the news of Syrian refugees who had drowned when their boats capsized in the Mediterranean had only just been reported, and it did not require a critical eye to make the obvious connection with the opera’s shipwreck imagery and wandering hero Odysseus. They emphasized that the show was conceived before this tragedy, yet it illustrates why radically reorienting the story for contemporary times can work so well.

Murray Beale says that staging a story as well-trodden as The Odyssey is less about faithfulness to Homer’s text and more about what present-day audiences make of it. Circa’s show — a collaboration between six classical musicians and seven circus acrobats, with a substantially pared-down Monteverdi score augmented by new electronic compositions — makes an unapologetic case for juxtaposing the ancient texts with modern performance.

Take the music alone. Four instrumentalists and two singers are entrusted with this patchwork score. They don’t perform on period instruments, nor do they adhere strictly to the dictates of period performance practice. Murray Beale is, nevertheless, versed in both historically informed performance as well as contemporary music: She has conducted modern opera and assisted on productions led by early music specialist Rinaldo Alessandrini. She says that Monteverdi’s music excites her because of his harmonic language: how innovative it was in its time and still is now, the epitome of something that is both old and new.

The staging of the show is intentionally doubled. The musicians comprise one part of the stage and the acrobats the other, though the exact setup and sightlines of the performers change from venue to venue, which keeps things from being “set in stone,” as Boyle describes it. The music and psychology of the characters are balanced in this production; one never supersedes the other.

“As musicians, we thought we wouldn’t be interesting at all,” Murray Beale confesses of the early rehearsal process. “What they [the acrobats] do is so not like anything we can.” Between a static chamber ensemble and a group of circus performers, surely an audience would follow the latter. But it is not often that acrobats perform with live chamber music, and Boyle counters that the feeling was mutual. He had never heard a human body produce such pure and powerful sounds.

Audience members may be equally awed by the visual spectacle and the listening experience. Circa’s production of Il Ritorno, much like the thematic source material of Homer’s Odyssey, accommodates a range of perspectives.

In 2018, the narrative focus of the show and the story might drift to Odysseus’s estranged wife, Penelope. (Indeed, the reclamation of Homer’s female characters has a literary precedent in Margaret Atwood’s The Penelopiad and Emily Wilson’s new translation of The Odyssey, the first made by a woman.) Certainly, the raw material is there in Circa’s staging. The female ensemble members quite literally bear the weight of their male counterparts on their shoulders.

But as modern issues manifest in a classical story, we have to consider what is new and what is universal.

LA Phil Announces a Full Summer at the Hollywood Bowl