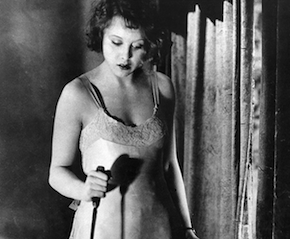 As seen in the recent — rather awful — Hitchcock film that not even Anthony Hopkins could save, the filmmaker (1899–1980) knew early on what would distinguish him: "We experimented, found new ways, even without having money."

Still, "early Hitchcock" means, to most fans, films from the 1940s: Mr. & Mrs. Smith, The Paradine Case, Shadow of a Doubt, many more.

Even for most movie buffs, it is surprising to learn that Hitchcock was an active and prolific director more than a decade before then. Now, thanks to Anita Monga's San Francisco Silent Film Festival, nine of the 10 surviving, near-forgotten Hitchcock silent films will be shown, June 14-16, in a three-day festival in the Castro Theater (built in 1922, a contemporary of the films).

The nine, recently restored by the British Film Institute, will be presented with live musical accompaniment, including new compositions.

Note that the "Hitchcock-9" is not part of the 2013 San Francisco Silent Film Festival, which will unspool July 18-21; for a report on the festival, see next week's Music News, on June 4. The connected-but-separate runs are similar to last year's featured presentation of the restored Napoleon, produced by the same organization, but shown separately from the festival itself.

Opening the Hitchcock festival, on June 14, is Blackmail, with Anny Ondra and Charles Paton, musical accompaniment by the Mont Alto Motion Picture Orchestra. Made in 1929, during the transition to the sound era, it has both silent and part-talkie versions with music and some dialogue. Shown at the festival is the original version, upholding Hitchcock's own regard for "silent pictures ... the purest form of cinema."

Two of the films have music written and performed by silent-film specialist Judy Rosenberg. She speaks about the tricks of the trade:

In creating a central theme for a film, I try to capture the film's essence. For Easy Virtue, I've created a theme that reflects the main character's sense of despair that results from the scandal that shaped her life. Musically, the theme shifts from a syncopated 4/4 to an unstable 5/8 time.

For Champagne, on a much lighter note, I've chosen an up-tempo tune that alternates between major and minor keys to reflect the trials and tribulations that the main character goes through — but the theme never takes itself too seriously."

Stephen Horne is a major presence on the silent film scene. At the Hitchcock event, he is responsible for the music of Downhill, The Farmer's Wife, and The Manxman, of which Horne says:

I was commissioned by the BFI to write the "official" score for the restoration.

I wrote the full score for a quintet, comprising myself on piano, flute, accordion, as well as oboe, oboe d' amore, fiddle, viola, lever harp, and percussion.

The film is set on the Isle of Man — an island which had quite an austere religious tradition. At the same time the musical tradition of the island reflects its position geographically — somewhere between Liverpool, Scotland, and Ireland.

My music is an original composition but does incorporate a handful of authentic folk tunes that would have been famous on the island at the time, as well as some hymn tunes of the period. The instrumentation was meant to create a broadly Celtic flavor, while still prioritizing atmosphere and emotion. For this show, for practical reasons, we'll be presenting a scaled-down duo version, in which I'll be joined by the gifted local harpist Diana Rowan.

Other than that, my accompaniments will be a combination of planned improvisation and compositional elements — what I like to call an improvised score. The films I'm accompanying are not the obviously "Hitchcockian" ones, although The Pleasure Garden opens with a series of shots that encapsulate some of the director's obsessions: blondes — especially blondes' legs — and voyeurism.

My most experimental score will probably the one for Downhill, which is a gloriously strange combination of the kitsch, ridiculous, and downright weird.