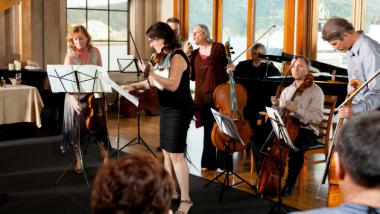 "The art of food, the art of wine, the art of music, the art of the location ... we bring an afternoon of pure beauty. That's the passion behind it — to give everybody an experience that they won't forget," said violist Ruth Ellen Kahn, founder and artistic director of Musica Marin, as we chatted over coffee recently in a San Rafael cafe.

A Bay Area native, Kahn studied viola at the Juilliard School in New York and played with the New York City Ballet Orchestra for almost 20 years. She returned to the Bay Area six years ago, frequently plays with the San Francisco Opera Orchestra and has a large roster of students.

Though already quite busy, she decided that she wanted to create an organization that would promote music in a unique and special way and transport the audience into "another world," one of centuries past.  Thus, Musica Marin was born.

Her concept is like the salons of 19th-century aristocracy. She brings in top players from New York, San Francisco, and Europe. The concerts are held in unique and beautiful settings (usually private homes), and the tickets, at $95, also include valet parking, gourmet food, and fine wine and champagne. "I want to treat people like kings and queens," says Kahn.

Kahn hopes that the social interaction with the musicians before and after the concert expands the cultural community in Marin. And, Kahn says, an unspecified amount of the concert proceeds are donated to arts organizations, which so far have included the San Francisco Boys Chorus, the California Film Institute, and the Juilliard Scholarship Fund.

The organization’s upcoming concerts, to be held on January 22 and 24 at the former home of San Francisco artist Ansel Adams, will benefit San Francisco's Merola Opera Program.

The concert will feature the world premiere of two new songs for baritone and string quartet, by Clint Borzoni an up-and-coming, New York composer. German baritone Marco Vassalli, a rising star opera star in Germany, will be making his U.S. debut.

The collaboration for this event began via Skype telephone calls (between Tiburon, New York, and Germany) and blossomed into actual "live" rehearsals via Periscope, a mobile app that allows you to share live broadcasts on your computer. In this way, Borzoni, Vassalli, and Kahn were able to listen to each other play and sing, discuss tempos, and specific passages, and get to know each other, personally and musically.

Musica Marin has several more concerts scheduled through May 2016, and Kahn hopes to expand the organization and number of concerts, including, possibly, a week-long festival at some point.