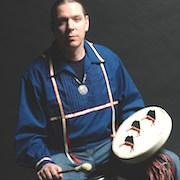 The “rhythmic vitality” of the Oakland Symphony’s upcoming Notes from Native America concert, in the words of Music Director Michael Morgan, renders the program “extremely attractive, including to a young, nonclassical audience. And I also want to get the word out about the deep spirituality and environmentalism you’ll feel in these pieces.”

The words of Maestro Morgan may be of interest to the almost 50,000 Native Americans residing in the Bay Area, as well as to regular patrons of the Symphony, of all ages and ethnicities. Although the Symphony’s Notes From series has annually highlighted eight foreign countries and regions (including Persia, twice), this will be the first program dealing with an indigenous American community, featuring music associated with the California Ohlone tribe, as well as with the Chickasaw tribe, from Oklahoma.

While researching the program, Morgan contacted ASCAP, the American Society of Composers, Authors, and Publishers, in New York, and spoke with Cia Toscanini, the organization’s vice president for concert music and the great-granddaughter of the fabled conductor. “There was not a huge number of Native American composers writing for orchestra,” Morgan points out. “But I started listening online to what she said was available. And in the case of Jerod Impichchaachaaha’ Tate, he’d been recorded by some pretty big orchestras, not the least of which was the San Francisco Symphony. He was a composer of technical prowess, and I heard how well he’d fit in with what we wanted to do.”

Tate’s father, Charles, is Chickasaw, and his middle name (“which I still haven’t learned how to pronounce,” Morgan admits) is a traditional “house name,” translated as “high corn crib.”

Charles Tate is a classically trained pianist and baritone, his wife Patricia a choreographer and professor of dance, descended from Manx Irish (from the Isle of Man, in the Irish Sea). “I grew up with two very strong identities, as a classical musician and as an American Indian,” says the 49-year-old younger Tate, speaking by phone from his family home in Oklahoma City. “I went to Northwestern, as a piano performance major, so I was playing Prokofiev and Rachmaninoff, and the fact that they were so focused on their national identity wasn’t a topic of discussion.”

It wasn't until his mother commissioned a ballet score from Tate that composing, and sourcing Native American traditions, became topics vital to his career. “She taught in Colorado and at the University of Wyoming, so she wanted the music based on legends from the Plains Indians,” Tate recounts. The ballet toured successfully and was recorded at the Cleveland Institute of Music, and the now-confident composer “started to have a desire to express Indian identity on my own terms. And I got to be a Bartók with other tribes, to learn from my Indian cousins all around the country, in different styles. I’ve worked with Navajo and Hopi, Lakotas, Ponca, Iroquois, Tongva (around the Los Angeles area), Canadian Indians (mostly Cree and Ojibwe) and Choctaw-Chickasaw-Creek,” based in his native Oklahoma.

“When I compose pieces that are choral, they’re in the [native] language,” Tate continues. “So I just premiered an oratorio sung in the Chickasaw language, with the Oklahoma City Philharmonic & Voices, and right after that a piece in Ponca, in Nebraska [about the trial of Standing Bear]. A fear years before, I did an entire song cycle in the Lakota language, and returning to my Music Alive residence [with the League of American Orchestras and New Music USA], my next gig will be with the Tulsa Symphony, in the Creek language.”

Tate’s part of the February 24 program at the Paramount Theatre will comprise two “scenes,” Hymns and Clans, from a much larger work, Lowak Shoppala’, translated as “Fire and Light.” “It’s literally a Chickasaw version of Riverdance,” says its composer, “which I’ve always loved, because I have an Irish profile and it’s a beautiful representation of multiple aspects of Irish culture and history, sung and played and danced. I was commissioned by the American Composers Forum for this work, and I wanted to do something similar theatrically, with aspects of Chickasaw culture and history.”

Toward this end, he, his father, and his grandmother reacquainted themselves with their tribe’s language and traditions. “You go home and record in private homes and at stomp dances,” says Tate. “Within our tribe, we have a wide variety of cultural knowledge, and the more we’re able to share, things get stronger. Since the ‘80s, Indian Country is reworking our culture — music, language, dance, everything. Kids are more fluent, and a whole bunch of adults have become fluent, and a lot of our kids learn powwow music from CDs. It’s very much like the Maoris in New Zealand, and the Irish, it’s going on around the world, and I just happen to be a part of that.”

The Hymns scene from Tate’s longer work is based on “church pieces composed during the 1800s by American Indians, for Christian services. You’ll literally be hearing Hymn No. 138, over and over, with a very large, romantic climax. I was feeling the removal from Mississippi to Oklahoma [mostly forced on the tribe by white authorities, in the 1830s].” Vocalists for this piece will be drawn from the Symphony’s Chamber Chorus. The Clans scene “represents our ancient clan leaders, the family system within the tribe, and the songs that go with them. It gets into the animals [for which each clan is named], and their ethos.”

Introducing and closing out the spiritual menagerie of clans is a male singer invoking the Minko, or Chief, and each animal is represented in poetry by Linda Hogan, a Chickasaw finalist for the Pulitzer Prize. “Actual poetry isn’t traditional to American Indians,” Tate points out, “but the nature of poetry is to deconstruct and abstract the laws of any language.”

Traditional musical tropes are worked into Tate’s orchestrations, though there’ll also be a Native hand drum and shakers.

Morgan has positioned Hymns at the start of the second half of the concert, to be followed by the SuNuNu Shinal Dancers, a local troupe from the Kashina Pomo tribe. Then comes Big Sur: The Night Sun, by African-American composer John Christopher Wineglass, who wrote the piece for traditional vocalists from the Ohlone tribe, located near the title coastal area. The piece was recommended to Morgan by one of the Symphony’s sometime clarinetists, who’d been involved with its premiere with the Monterey Symphony. “There’s soaring lyricism,” testifies Morgan, “and special instruments, like a big six-foot drum and a Native flute.” Morgan praises Wineglass for “putting so much research into his piece, and getting the permissions he needed to use materials and soloists in traditional music outside the Big Sur area, where it has a [tribal] connection.”

Anticipating some new concertgoers drawn to the ethnic theme of the concert, Morgan wanted also “something of what an orchestra ‘normally’ does, so that the audience is also exposed to that.” Following on his programming of Shostakovich’s Symphony No. 8 last year — “an extremely grim hour of music” — Morgan will open the presentation with the Russian composer’s “far more user-friendly” Symphony No. 9. “Tate was thrilled” with this choice, says Morgan, as “the perfect thing to pair with his own music, [because of] the rhythmic emphasis of both musics, the use of percussion, and the general orchestral coloration. The Ninth is also a particularly good introduction for people who don’t go to concerts very often, because it’s so upbeat and charming, and smallish, basically like a Haydn symphony written by Shostakovich.”

Tate, who works regularly with the Chickasaw Summer Arts Camp and for a couple of years hosted the Chickasaw Chamber Music Festival, looks forward to a stronger Native presence in a variety of musical genres, including classical and jazz. He recommends a website, http://www.moltonativemusic.com,, whose mission statement, “inspired by the legacy of our ancestors, aims to create a platform to promote and celebrate Native composers, performers, and students.”