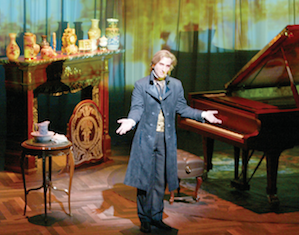 Time travel to 1848 and the well-appointed Parisian living room of composer Frederic Chopin as Hershey Felder brings the pianist to life in his solo show, Monsieur Chopin, now playing on the Berkeley Repertory Theatre's Thrust Stage through Aug. 10.

The dozen or so Chopin works included in the show were selected because they give the play its narrative thrust, according to Felder. "They absolutely have to drive the story,'' he said, in a telephone interview. "One of the pieces I was desperate to play was the 'Berceuse' but I didn't include it because it didn't move the action." Felder sometimes plays the lyrical lullaby (Op. 57, Variations in D-Flat Major) as an encore.

Monsieur Chopin brings the audience on a journey to the Romantic era of the early 19th century and into a window of the composer's short life. The piece is structured around milestones in the years before his death in 1849 with solo piano works. Monsieur Chopin is the second movement in Felder's Composers Sonata (1999-2014), which are one-man shows in which he portrays noted composers, including George Gershwin Alone, Beethoven As I Knew Him, Leonard Bernstein in Maestro, Franz Liszt in Musik, and Hershey Felder As Irving Berlin.

The Montreal-born Felder chooses the composers with the goal of combining storytelling with great music. "It has to have a strong story, strong music and it has to be a collaboration with an audience ― people have to want to come and see it," he said.

Felder was attracted to portraying composers who weren't regular people, "but we only know that after the fact," he noted. "None of them were born into what they became. They built it. It was part of their discovery of themselves. Chopin was born on a farm. Liszt also came out of nowhere. Some of them were children of immigrants," said Felder, whose own parents came to Canada from Poland and Hungary.

Why Chopin among a pantheon of talented and fascinating composers? "The reason is his music," said Felder. "It is so beautiful, so exotic, so everything." As well the composer's life was dramatically compelling, including his nearly decade-long romantic relationship with Sand, the pen name of the novelist Amantine-Lucile-Aurore Dupin.

"It's a great story, a great romance, a sad romance," he said, referring to the couple's breakup a few years before Chopin's death.

Felder is no stranger to the Berkeley theatre company, which last October presented The Pianist of Willesden Lane, under his direction from his adaptation of the book The Children of Willesden Lane by Mona Golabek and Lee Cohen.

Felder is currently readying Hershey Felder As Irving Berlin for November performances at the Geffen Playhouse in Los Angeles (the show was previously done in concert form at the Berkeley Rep), and a production of Jack Lemmon Returns, a one-man show with Chris Lemmon, which Felder wrote and directed, slated for a January production in Los Angeles.

As well Felder continues to work on his Liszt-Wagner piece, Musik, that explores the tangled relationship between composer Franz Liszt and his son-in-law Richard Wagner. He usually spends months going through the music of the composers he's chosen to stage a show around. After deciding what he'd like to play, he puts it through the test of whether it will resonate for theater audiences. It can take a year or two before the show reaches production. While nothing is stamped in stone with his shows, he knows when a piece works. "It always comes down to music," he said, "and a good story to tell in context."