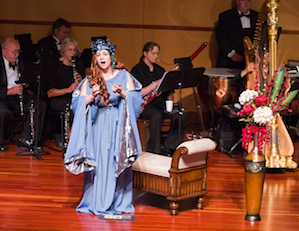 “After I programmed the pieces, I wrote down nouns and adjectives that best describe their content,” Maxwell-Yamamoto told SFCV. “Then, I chose the words that appeared most often, and used them to construct the program’s title.”

Maxwell-Yamamoto wanted some of the arias and scenes from her 15 chosen operas to be familiar blockbusters that people have heard in TV commercials, movies, or Bugs Bunny cartoon. Others she selected from operas known for their exoticism and beauty, so that the program’s five singers could wear “gorgeous, extreme costumes.” Because all the pieces are already in her singers’ repertoire, she has been able to dispense with numerous rehearsals, and instead spend her money on higher-level singers and 20 costume and wigs that will guarantee, in her words, “Something’s always new and changing every five minutes.”

Most of the singers are well known and respected in the Bay Area. Tenor Christopher Bengochea, for example, has excelled in leading roles for Opera San Jose and other companies. Baritone Michael Taylor, a member of the San Francisco Symphony Chorus since 2007, and soprano Diane Squires are also frequently lauded. Less familiar may be mezzo-soprano Katja Heuzeroth, whom Maxwell-Yamamoto met during singers auditions she conducted in New York City. “She’s so fabulous and versatile,” she says of the mezzo. “I love her.”

Maxwell’s own path through the world of opera is a familiar one. After majoring in voice at the Juilliard School’s pre-college division and the Manhattan School of Music, she traveled to San Francisco where, in 1987, she was snapped up by the San Francisco Opera Chorus. After a single season, she departed to pursue her dreams of a solo career.

“I tried very hard for many years,” she says. “I sang regional professional musical theater, as well as opera. But, as my grandmother warned me, ‘Many are called, but few are chosen.’ What I learned in the process, however, is that you don’t have to be standing on the stage of the Met to make a difference.”

Armed with that knowledge, she was determined to disabuse naysayers of the objections to opera that she had heard for too many years. “After hearing, over and over, that opera is too long, too boring, and too expensive, I took those words on as a challenge, and tried to find what in opera was attractive to people,” she explains. “In this performance, I believe I have taken away the work and the parts they didn’t like by instead giving people instant gratification, just as they get on the internet. People don’t want to wait for the big aria in Act 2; I cut to the chase and give it to them right away.”

In this evening extravaganza, she’s also giving her audience the 20-piece Opera Bravura Orchestra, conducted by Bruce Olstad; so many wigs, costumes, and costume changers that the program will require six dressers; and easy to follow translations that she will project in a novel manner.

“If you have to look way up or to the side to read supertitles, you look away from the singers’ very expressive faces,” she laments. “Instead, we project titles, synopses, and a full paragraph of translations just to the side and a bit above a singer’s head. I spoon-feed the audience the words, and take all the work out of it so people can focus on the singers. The feedback has been very positive.”

Maxwell-Yamamoto began Opera Bravura with some of her fellow singers in 1995. The endeavor entered a new phase in 2011, when her intentions to produce music and dance s as well as opera led her to incorporate as the non-profit Opera Bravura Entertainment. After two initial performances that year, scheduling conflicts caused her to put her plans on hold. Now, after a dry run last fall, the company returns big-time.

“This is what I’ve dedicated my whole existence to,” she says. I can only hope that the risks I’m taking will pay off with happy people who are smiling at the end and saying, “Wow, I really do like opera. This was my first experience, and now I want to see a whole opera.’ That’s the goal.”