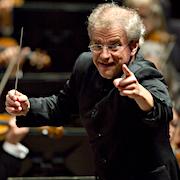 Osmo Vänskä Looks Beyond the Expected

To live life as Osmo Vänskä is to every day and in every corner of each symphony, concerto, oratorio, opera, or other musical work find something new. The Finnish conductor in an interview from his home base in Minneapolis, Minnesota, is at first disingenuous. He claims at the outset of the interview to be “not certain what you want me to say,” and initially offers concise answers to questions about composers and the future of classical music. But pressed to speak authentically, from his heart and intellect, Vänskä grasps the bull by its horns.

“With all the great composers, it’s always about human beings. About our minds, where they will go, our struggles. The music might have different colors, but composers are always leading us through places of pain, of hope — the messages written with good music.”

Vänskä will appear October 26–28 as guest conductor to lead the San Francisco Symphony through music from his homeland: Jean Sibelius’s Finlandia and Violin Concerto in D Minor, the latter with violinist Baiba Skride making her S.F. Symphony debut. Also on the program, Shostakovich’s Symphony No. 1.

For classical music to survive — Vänskä seems most enthused to speak on the well-worn topic — music directors, composers, conductors, and the people who manage and direct classical music organizations must not repeat “the same old stories.” New works, new composers, new concert venues; indeed, an alternative mindset must prevail. “Instead of thinking young people must come to us, we must go to them,” he says. The works of contemporary composers he suggests are equally, sometimes more relevant to young audiences than are works by “people who lived 100 years ago.”

It’s a somewhat surprising statement, coming from an artist widely revered in particular for his command of the Sibelius repertoire. The Sunday Times’s Hugh Canning, in a review of the final disc in Vänskä’s three-album Sibelius Cycle (recorded with the Minnesota Orchestra) writes, “With these recordings, Vänskä confirms his status as our greatest living Sibelian. Irreplaceable.”

Vänskä is in his 19th season as music director of Minnesota Orchestra. An active guest conductor, his 2017–2018 engagements include in addition to S.F.Symphony, Rundfunk-Sinfonieorchester Berlin, SWR Sinfonieorchester, Toronto and National Taiwan symphony orchestras, Orchestre de Paris, the Seoul and Helsinki philharmonic orchestras and, as honorary conductor, appearances with the Iceland Symphony Orchestra. Multiple recordings — complete symphony cycles of Sibelius and Beethoven; Mahler’s Symphony No. 5 — earned Grammy and Gramophone award nominations.

Despite carrying an award-laden marquis as a sought-after classical and contemporary music conductor, Vänskä pushes back at traditional definitions and boundaries. His well-received performances as a clarinetist (he was principal chair of the Turku Philharmonic in the early 1970s and co-principal chair of the Helsinki Philharmonic from 1977 to 1982) resumed in 2005 and he appears regularly with Minnesota Orchestra and other ensembles. This season, in addition to playing clarinet with Minnesota Orchestra in September in an octet arrangement of Sibelius’s En Saga, he participates in a centennial-marking VocalEssence “Finlandia Forever” program and a program with the Philadelphia Chamber Music Society.

“I am an instrumentalist,” he says. “It gives me many different things, many thousands of ideas about balance. When I’m playing clarinet, Brahms, Beethoven, other composers, it gives me another way to make music. When I conduct, it helps me to handle the music if I’ve played it as a clarinetist.”

The more he conducts a work, the more he learns. “The musicians are always doing things I ask, but also reacting,” he says. The feedback loop invigorates Vänskä, especially when guest conducting. “I can get fresh ideas about the music. If they’re not used to working with me I find I have more new ideas because it’s a conversation, a dialogue.”

Vänskä says Finlandia, a celebratory piece that brings tears to his eyes regardless of the orchestra or venue, was “one of the most powerful ways for the Finnish people to say they wanted independence.” His native land’s struggle for independence from Russia 100 years ago he says mirrors contemporary efforts to achieve freedom: “It is always a fight against someone who is not maybe ready to give us what we want or what we believe belongs to us.”

Sibelius’s demanding violin concerto requires a player who is skillful enough to “make music” and not simply concentrate on hitting the “right notes,” he insists. Speculating that Sibelius’s disappointment after failing to achieve his dreams of becoming a solo violinist are written into the concerto, the deep, emotional back story he predicts will inform Skride’s performance. “She’s a great violinist. She can play Sibelius and any other composer. For me, she has emotions and is able to play those out.”

While conducting the last work on the program, all thoughts of Sibelius will vanish. “When I’m doing Shostakovich I’m not thinking of Sibelius. Every composer needs a personal sound: there’s a Brahms sound, typical Beethoven. Same with Shostakovich. It’s a demanding piece because he’s written extremely fast tempos. On the other hand, he was 18 years old and everyone that age has an idea of how fast someone can play. At same time, it’s not about making tricks: It’s a great symphony from such a young composer. It’s a great start for the composer he became.”

For Vänskä, the appearance with the S.F. Symphony is an opportunity for discovery. He expects to find the unexpected in familiar territory. “I have always have a good time with the orchestra. I cannot say anything other than their attitude is great and they want to do good music.”

The Finnish conductor Osmo Vänskä returns to the S.F. Symphony with violinist Hilary Hahn, and the results with the orchestra are, once again, exemplary.

New Grammy-winner Osmo Vänskä, no longer with the Minnesota Orchestra, prepares a varied Finnish/Russian concert with the S.F. Symphony.