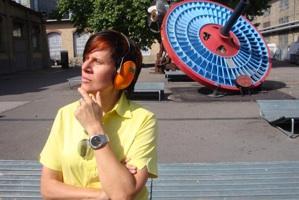 At the young age of 16, saxophonist and San Francisco native Rent Romus had already experienced his first taste of producing and putting on shows for fellow artists and musicians. It was this innate passion as well as a love for underground music that inspired Romus to create, 36 years later, the Outsound New Music Summit, a Bay Area-based, artist-organized festival. Whether through the development of his record label, Edgetone Records, or the creation of several other music series, Romus explains that he is constantly searching for the outer realms of music. Musically identifying himself as “too-in-to-be-out and too-out-to-be-in,” Romus has succeeded in producing a forum for similar “outside-the-box” artists, allowing their music the opportunity to be heard.

The ninth annual festival, a six-day event at the San Francisco Community Music Center, begins on July 18. Living up to its tradition, the Summit will exclusively feature independent artists, most of whom create music and sound in improvisational, experimental, and exploratory ways. When asked what he looks for in an artist performing at the Summit, Romus explains, “there’s a certain originality that exists with artists who are willing to not play standard forms of music — they want to find something different. Even if it falls within a genre — which is not a problem at all, that’s completely okay — still, they’re doing something that is definitely not standard in form and that’s what I’m really looking for. I’m looking for music that is unique to that particular individual.”

And that is exactly what you will find at this refreshingly different festival, “a wide range of amazing, exotic, strange, weird, fun sounds” that Romus is undeniably proud to present. Just a few of the artists in this year’s festival include: Chen Santa Maria, a duo that creates music through a mix of samples, drum machines, guitars, and effects; Kadet Kuhne, a media artist whose work includes video installation and music composition; and singer, composer, and electronic instrument performer Amy X Neuburg, whose music bridges the boundaries between classical, experimental, and popular music.

Don't think for a moment that the Outsound New Music Summit is solely for musicians to display their craft. Romus says that “in the new music scene, it’s not just about music, it’s always about bridges — about creating bridges.” It is for this reason that the festival goes one step further, and includes segments that combine an assortment of artistic mediums, such as the animated films of Martha Colburn, which incorporate an improvisational soundtrack by pianist Thollem Mcdonas. There will be a dance series, one-minute films, and a workshop on how to build your very own cardboard synthesizer. Through the Outsound New Music Summit, Romus has provided us with the opportunity to open our minds to some of the most intriguing, peculiar, captivating, and distinctive artistic sounds and sights that can be found in the Bay Area.