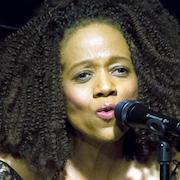 My warmup for the high-velocity 29th Annual San Jose Jazz Summer Fest begins with a cool conversation with Paula West, one of the Bay Area-based must-see jazz vocalists on the festival’s roster. Approachable, uniquely skilled and vastly knowledgeable about the traditional and contemporary jazz scene, West is a complete non-diva and all about the music.

“The number one thing is telling the story,” she says, about selecting songs for the upcoming three-day festival. “I’m very lyric driven. I like to take people through a few but not too many ballads — but also songs with humor, romanticism, joyousness, heartbreak. You don’t have to be bombastic or use melisma, because then you’re overdoing it. I’m not a scat singer; never have been. I use different avenues to deliver a song.”

Although widely recognized for masterful renditions of standards from the Great American Songbook, West has for several years branched into songs by Bob Dylan, Johnny Cash, David Bowie, and others. Most recently, she surprised even herself by adding Randy Newman’s “Short People.” She quotes excerpts:

“They got little hands /And little eyes/ And they walk around/ Tellin’ great big lies ...”

“Given the political situation now, I can’t not address what’s going on,” says West. “The lyrics pertain not to the physical aspect of being short but to being limited. It’s a way for me to address politics but still with a sense of humor. I wasn’t hesitant about doing it recently and people got into it.”

After moving to the Bay Area in the 1980s, West brought lessons gleaned from classic jazz records by Sarah Vaughan, Maxine Sullivan, and others to her regular appearances at Birdland and Algonquin Hotel's Oak Room in New York, and in San Francisco, to Yoshi’s, Feinstein’s, and the now-closed Empire Plush Room at the York Hotel. National and international tours, a five-year collaboration with the George Mesterhazy quartet that resulted, in 2012, in her fourth and long-awaited album, Live at the Jazz Standard, established West as a versatile, sensitive vocalist.

Sensitivity to whether or not a song is ripe for interpretation means it’s unlikely anyone will ever hear West’s version of James Brown’s “I Got You (I Feel Good).” “I’d never try to do a James Brown song, because I don’t think I could bring anything new to it. Or Al Green, he’s just so great I’ll stay hands off.” She also steers clear of songs made famous by other women; not because she wouldn’t like to pump more music written or performed by women into the canon, but because it’s harder as a female to add a new sound. Hit songs sung by men offer unique opportunity. “People tell me about the Bob Dylan songs I sing: “Oh, I never really heard the lyrics before.” A good song is open to different interpretations.”

What is literally no longer open that she regrets are casual clubs or hotels with pianos. “When I moved here in the 80s, there were clubs in North Beach, there was Kimball’s in San Francisco and later in Emeryville. Nearly every hotel had a piano. Now you have to be self-disciplined to grow musically because there aren’t a lot of clubs to apply yourself. Even if it’s not a gig, you used to be able to sit in at places,” she recalls.

Appearing at the festival with the Adam Shulman Trio (pianist Adam Shulman, bassist John Wiitala and drummer Greg Wyser-Pratte), West says they bring their gifts not only to the stage, but to the rehearsal studio. “If we’re working on new arrangements, they have input and I think, ‘Wow, this is better.’ It doesn’t come to complete form until you work with them. It’s faster, slower, starts with the bass or not ... even when you’re performing a number it can change up. Nothing is ever the same.”

On the list of possible festival songs are audience favorites: Brazilian composer Antônio Carlos Jobim’s “Waters of March” and classic Dylan including “Like a Rolling Stone.” Although she doesn’t like to preach, West says if it’s appropriate she sings John Lennon’s “All I Want is the Truth.” “It was written in 1971 but it’s as if it was written yesterday. It’s pretty heavy.” Again, she quotes some of the lyrics:

“I'm sick and tired of hearing things from/ Uptight short sided narrow minded hypocritics/ All I want is the truth, just give me some truth…”

West often follows that song with “Put on a Happy Face” to lighten the mood. “I don’t believe in being a downer. You take the audience through certain moods, but it’s important to have balance.”

In addition to West, the San Jose Jazz Summer Fest has an eye-popping list of headliners on the program: Kool & the Gang, Herb Alpert and Lani Hall, Booker T.’s Stax Revue, and many more. And then there’s ConFunkShun. Take a YouTube video tour or throw one of the Vallejo-originated funk band’s eleven albums on a turntable to get the juices flowing. It’s impossible not to move to ConFunkShun’s groove.