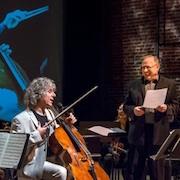 This phrase makes Philharmonia Baroque Orchestra & Chorale executive director Courtney Beck cringe: “Classical music has to bring in younger audiences to survive.” Furthermore, alternative concert programs with tickets at low price points she believes are perceived as junk, the desperate grasping of an orchestra making an effort to attract a (purportedly) departing audience.

So in 2014, when Beck initiated and began to design PBO’s alternative, low-ticket-price ($25) PBO SESSIONS program, she was either nutty, disingenuous, or just crazy-clever enough to be authentic and dedicated to the organization’s core: “We’re a period instrument ensemble with exceptional musicians and a highly talented, full-time, endowed chorale,” says Beck. “We stay true to that. We are not desperate. SESSIONS is not just [Baroque to early-Romantic] period music, it’s a deep dive into the history, visual arts, and sociological implications of how this music came to be.”

The 90-minute programs, presented in mid-size venues like the 200-seat ODC and, this year for the first time, Stanford University’s 180-seat Bing Concert Hall Studio, follow a format that has guest conductors and musicians leading audiences through a multimedia event that includes video, text readings, conversational scholarly insights, and live performance. Designed to emulate a late-night program of PBO’s London-based counterpart, the Orchestra of the Age of Enlightenment, Sessions after-parties are a key element. “At the gatherings afterwards, it’s not just musicians leaning on the wall. Our musicians want to know the audience. It feels familial. I like to brag that we have the longest after-parties,” says Beck.

If it’s true, the attraction is not simply the high-quality (complimentary) wine that’s served, she emphasizes. “Our audiences are hyper-curious and the musicians help the audience understand what we perform, both the obscure and familiar music. How do audiences understand the music when it’s played on period-specific instruments and not modern instruments? The musicians will tell you. They’re invested in imparting information they don’t get to explain in a regular concert. It makes it that much more meaningful to the musicians.”

Beck regards their audience as highly intelligent. “Whether or not they know anything about classical music, it doesn’t matter. They know something happened in history. They learn the creators of the music were living under unusual circumstances.” Instead of appealing to the cringe-worthy “younger audience,” she argues that PBO SESSIONS appeals to “new audiences” orchestras must cultivate. “What we really have to do is bring in audiences of all ages across the spectrum. In the end, anyone knows the “younger” audience isn’t going to pay the bill right now. Middle age and older people who’ve yet to experience music on a deeper level — we fail them by lunging only at the 20- and 30-year olds.”

Based on PBO SESSIONS’ sold-out track record and the organic, “up-sell” impact it’s had on subscriptions to and interest in PBO’s regular concert series, it’s possible to conclude that Beck is on to something. And not just from a marketing standpoint. The work of Pulitzer prize-winning composers and appearances from guest conductors and leading vocalists have sparked a certain improvisational boldness, Beck suggests. Not only are the elements of a PBO SESSIONS program tossed together like an instant salad within 24 hours of the show, PBO has launched and will continue to expand its Jews and Music and New Music initiatives. “Our February program at the Contemporary Jewish Museum sold out a month early. We had a waiting list. I’ve been with PBO for 11 years and have never had that happen before,” says Beck. “We are just at the beginning of what we can do.”

This is not to say PBO SESSIONS was or is created willy-nilly. The developmental legwork was extensive: two years of planning, exploration with assistance from an outside company into the orchestra’s and the musicians’ backing, and homework Beck protects as proprietary but says is “a rockin’ good recipe.” An angel investor who shares her belief in reaching out to “new” not just “young” audiences provides solid, fundamental financing.

Considerable time is invested in engineering the media components of the shows. Hard lessons — a too-large venue caused one program to fall flat, she says — are learning experiences used to refine the program.

Although there’s not a formula — each program has its particular mojo — the synergy between animated, engaging guest conductors, the PBO musicians, and the audience is crucial. Curation is done by inviting people already familiar with the orchestra or by watching videos of a guest prospect’s interviews, alternative concert performances given elsewhere, and through recommendations. About the upcoming and final installment in the series until the fall season, Beck predicts keyboardist Richard Egarr in his second outing with the orchestra will be funny, eccentric, and warm. “Last time, two years ago, the audience went wild. They were screaming with laughter.” During rehearsals for “Corelli the Godfather: The Corleone of the Concerto,” the Academy of Ancient Music’s director may even go barefoot, Beck adds. Which translates into a distillation of the history behind Corelli’s music that will be personable and “not presented by Egarr as a conductor on high.”

The most successful, popular PBO SESSIONS leaders have a modern sensibility and a foothold on the contemporary universe, according to Beck. Oh yes, they also manifest the PBO core: authenticity, belief that audiences (of all ages) are intelligent, and fascination with the culture and context of classical music.