It’s been more than a year of pandemic shutdown, and Richard Egarr has yet to occupy his physical office, near Union Square in San Francisco, as music director of the Philharmonia Baroque Orchestra & Chorale. “He took the reins on July 1 [2020],” notes Courtney Beck, PBO’s executive director for six years, “and he basically said, ‘there’s nothing we can do, so let’s do everything we can.’”

That “everything” has included over 100 video productions whose variety and vitality have made PBO the musical equivalent of HBO and Showtime. Available via the ensemble’s website and on YouTube, the virtual manifestation of the PBO has arguably allowed subscribers and others to get to know Egarr more intimately. From Amsterdam, where he studied harpsichord and early music with Gustav Leonhardt and has lived for 30 years, the loquaciously ingenuous Egarr has initiated a series dubbed From the Kitchen Table, where he expounds on such topics as the influence of old recordings on contemporary performance. On video he has also performed four-hand Czerny transcriptions of Beethoven symphonies with his Russian-born wife, Alexandra Nepomryashchaya, and in the Live From Amsterdam series has led concerts at sacred spaces.

Another series, What’s New & H.I.P. With Tarik and Rick, pairs Egarr with Tarik O’Regan, who was announced last week as PBO’s first ever composer-in-residence. The two talk about the often-overlooked connection between historically informed performance (hence the acronym) and new music, in the process interviewing other performers, composers, and tastemakers. He’s just about to receive his COVID-19 vaccination and is unlikely to revisit San Francisco until this summer or fall, but Egarr has already made himself an invaluable purveyor of the PBO mission. “Why I think we’re such a good fit,” he attests in a Zoom interview, “is that there’s a kind of free spirit at PBO that’s open to meet challenges and to get one’s hands dirty and to try things, in the spirit of exploration. Everybody, from the office to the donors to the board of directors, are so kicked by the whole thing! They love the music, they love the organization, and they’re behind any crazy idea I come up with.” 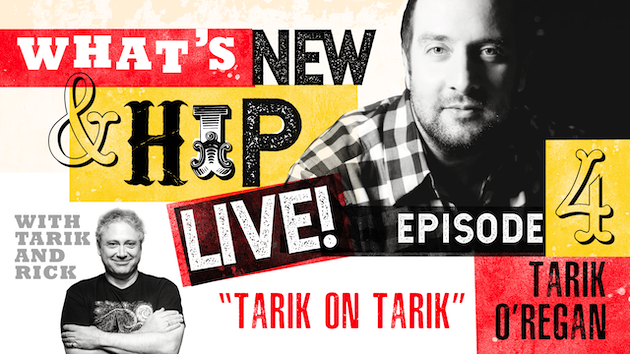 A year earlier than originally planned, Egarr succeeded Nicholas McGegan, who made his first appearance as PBO’s music director laureate last week in the Jews and Music (JAM) series, one of a handful of projects established as both live and video productions during McGegan’s term. Although the 57-year-old Egarr fell in love with harpsichord and early music as a choir boy in York, England, he points out that his parents “were nonmusicians who liked ‘easy listening,’ they loved Rosemary Clooney and Perry Como. I was a little more adventurous, so I listened to [English rocker] Cliff Richard.”

After studies at Cambridge and with Leonhardt, Egarr was picked to succeed Christopher Hogwood at the Academy of Ancient Music, which “had a certain idea of what its brand should be, and it wasn’t anything too experimental,” he reflects. “I would have loved to have pushed the boundaries a little more, but that wasn’t what that organization was and is. In a way, PBO is much more how I am, as a musician.”

His development as “a musical omnivore” informs Egarr’s eagerness to work with O’Regan and their shared goal of divesting early music of its fusty separatist stereotype. “My great relief is that historically informed practice isn’t limited to any era, it’s a way of thinking about how you approach and perform the music,” he says. Unlike some of his colleagues, he believes that, “we have priceless information on old recordings, from 19th-century instrumentalists and orchestras,” and, by the same token, “I’m desperate to get the earliest mono pressing of [the Beatles’] Rubber Soul or Revolver that I can. I’m an audiophile.”

PBO has maintained a five-year connection with Juilliard’s Historical Performance division, including side-by-side concerts with the school’s Juilliard415 ensemble and weekends of coaching and mentorship. It furthers that relationship that Egarr has been on faculty in that division since its inception 10 years ago. “He’s determined to raise up the next generation of musicians,” says Courtney Beck. “And he shares his interest in and with his audiences. He’s a teacher for everyone.”

“Taste is very personal, but historically you can demonstrate things dispassionately, and it’s very nice that a lot of the younger generation is taking these things on board and running with them,” says Egarr. “They’re composing and improvising and trying out all this kinky historical stuff.”

The three-and-a-half-year residency of O’Regan will include the commissioning of a choral work, an orchestral work, and a new opera. A performance of Leclair’s opera Scylla et Glaucus at Herbst Theatre was supposed to be part of “Nick’s last big blowout” a year ago, according to Beck, but it was obviated by the pandemic. Scylla and Rameau’s Le Temple de la Gloire were released as a PBO recording, though, as was Handel’s Saul.

“One of the things Philharmonia has done to not just weather the storm but thrive is we’ve developed these extraordinary partnerships with key artists, stage directors, and producers, and we’ve become producers ourselves,” says Beck. “And we’ve catapulted careers. One of the things [countertenor] Anthony Ross Costanzo said to me in a quiet moment was, when National Sawdust came to us to see if we would co-produce [Handel’s] Aci, Galatea e Polifemo in New York [in January, 2020], he was already a star, but that performance was the beginning of his superstardom.”

And despite the pandemic, “Philharmonia last spring paid their musicians 100 percent of the income they would have made,” guaranteed by generous backing from the PBO board and donors. Beck concedes that “we have a lot more friends” as a result of the worldwide reach of the ensemble’s video output, and that “some musicians have learned technologies that they might never have used, by necessity. There are ways that some of the virtual programming, once we’re post-pandemic, really ought to continue, if it means we can connect with people who may not be coming to the halls, for whatever reasons.”

In his non-pandemic years, “I was maybe away two-thirds of the time, so to be home with the kids has been very different but wonderful,” adds Egarr. But he’s excited about setting up shop in San Francisco, “where we’ve got all sorts of things up our sleeves which I’m sure you can’t possibly even imagine.” Like what? “Buffy the Vampire Slayer,” he laughs. “That’s all I’m going to say.”

PBO’s Saul Is a Perfect Fit for Nicholas McGegan