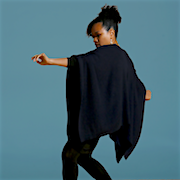 Motherhood, mentoring, movement that digs deeply into what it means to be a brown or black dancing body and a mothership that travels through past, present and future time combine in the sixth annual PUSHfest Sept. 20–22. Presented by PUSH Dance Company and opening its 14th home season, programming in 2019 expands the festival from two performances to offer four different programs. Artistic Director Raissa Simpson says in an interview the decision to add performances and showcase more emerging and mid-career artists resulted organically during curation.

“We looked at the applicants and saw we had really, really hard choices when we were eliminating people. This increases our reach. For PUSHfest, unlike the rest of our season, we can be responsive and adapt to the needs of the dance community,” she says.

Featured among the local and national choreographers and companies are Simpson’s final installment of the Afro-futuristic Mothership III and a world premiere, Society, by Bessie Award-winning guest choreographer Gerald Casel. Simpson says Casel’s six-week workshop mentoring the preprofessional dancers in the company’s PUSHLab was an exercise in “decolonizing” the choreographic process. “What is agency in dance?” She asks. “In a rehearsal we had, Gerald told the audience he didn’t choreograph one step; the dancers did it.” Instead of providing specific movement vocabulary, Casel, like many contemporary choreographers, asked dancers to explore their histories, not their dance lineage. “In this process, dancers go from just being vessels to being participating bodies,” says Simpson. “Visually, it creates a society, which is the work’s title.”

In Mothership III, society is the vessel, or more accurately, the lens through which past, present and future time are viewed. Simpson describes the first section created in 2013 as centered on the present-day overload of digital information and partisan politics in America; both aspects shaded by the country’s history of slavery and denial. (Dancers were costumed in a futuristic version of what the Founding Fathers “should” have looked like, a visual example.) Section II is a dystopian society 400 years into the future that literally and metaphorically is on fire: burning forests, land, and natural resources, violently destroying the threads that connect cultures and people, and economically exploiting the lives and bodies of black and brown people.

Section III is a science fiction-inspired return to indigenous ways of life. “There is spirituality, respect for elders. This is our looking at diaspora, the middle passage, how Africans had their cultures taken away from them, how they were and are not categorized as human,” says Simpson.

The concepts that Mothership represents for Simpson can hardly be reduced to an intellectual pursuit of Afro-futurism. (Afro-futurism is an artistic movement scholars most often say began in the 1990s that investigates traditions and appropriations of Black people in the imagined past, present, and future worlds.) For Simpson, the birth of her son, approximately 11 months ago, was significant in shaping the trilogy’s final section.

“For this, being a new mom, I’m looking at the present. It’s terrifying because I’m looking at something that hasn’t finished and I’m assessing it. There’s so much chaos, things to be fearful of. I’m putting that together and, as I looked at guidance, I looked at Octavia E. Butler's [science-fiction] novels. She made it a point to put present day black characters in her novels. She was once asked, ‘Why do you need black people in your novels when aliens are so omnipresent in science-fiction?’”

Apart from the clear misconception and possible stinging offense of equating a person of color with extraterrestrial beings and dismissing an entire population and its history as unnecessary, Simpson says black people have been excluded from sci-fi movies, films and literature. “Aliens couldn’t replace the black experience. [Actor] Will Smith sort of represents the token because he’s in about 60 to 80 percent of sci-fi films with black actors. I wanted to broaden Afro-futurism. I wanted to bring in female voices. Thinking outside of the movie Black Panther or music videos, I was thinking of the films I so desperately wanted to see when I was younger, with people who looked like me.”

Intriguingly, in a dance that untethers time and history — the mothership can be a slave ship or a supersonic, futuristic spaceship — the movement Simpson created for the new, seven-minute, 30-second section is grounded, landlocked. “I’m outside of my comfort zone because I like to explore how I move people around the stage,” she says. “But in rehearsal, my 11-month-old son is pulling me down to sit with him or hold his hands. Ninety-nine-point-one percent of the piece is done as floor work. We’re down on the level of babies. It has an evolutionary feel to it.”

And like most parents, there is a dream embedded in the future. “We, black and brown bodies, live in survival mode. How are we going to make it from one day to the next?” she asks. “Dreaming of getting on a spaceship and escaping slavery and oppression, yeah, I’m thinking about it. We’re afraid to dream because it’s a risk: getting a loan, opening a business. The American Dream, we’re often excluded from it. There’s always been the idea of tokenism; if one person of color makes it, then we all are.”

A new narrative would not have the backlash of past histories and present realities, she suggests, citing the formation of the Ku Klux Klan after slavery and reconstruction and voting rights initiatives struck down after Obama’s presidency. Is she too hopeful, even dangerously so? Simpson says she is not. “We’ve long been excluded from movies, literature, and art set in the future so there’s no danger in my creating a representation of black folks looking toward the future and knowing they will have comfort in belonging.”