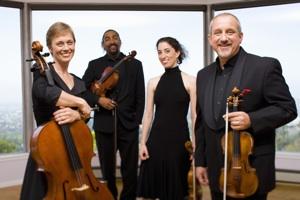 Joseph Sargent on March 8, 2010
Quartet San Francisco is definitely not your grandmother’s string quartet. While other ensembles stick to classical masters like Beethoven and Brahms, this ensemble’s tastes also lean toward blues and bluegrass — not to mention jazz, pop, funk, and even tango. Since its formation in 2001, QSF has become a nationally prominent crossover group, earning three Grammy nominations over the past four years alone.

It’s hard not to take notice with an artistic credo that proclaims, “When the music says swing, we swing. When the music says groove, we groove.” Swingin’ and groovin’ will doubtless be on display at their upcoming March 20 performance at Herbst Theatre, part of San Francisco Performances’ family matinee series. Besides selections from the group’s newest CD, titled QSF Plays Brubeck, the performance features such standards as “Under the Sea” (from Disney’s Little Mermaid), “The Pink Panther,” and Raymond Scott’s “Powerhouse” (as heard in Bugs Bunny cartoons — remember them?).

Performing these popular styles artistically, and crafting successful quartet arrangements of these songs, is no mean feat. According to Jeremy Cohen, first violinist of QSF, the quartet maintains an ongoing dialogue on style and performance issues. “The strongest focus of our work process is to achieve a performance which meets each piece we play in its native language. This has us constantly creating techniques which speak ‘jazz band’ or ‘bluegrass’ or ‘calypso,’ or whatever it is we are playing at the moment. This process requires input and experimentation from all corners of the quartet. We all rely on each other’s ears and talents in order to collectively achieve these styles.”

Brubeck’s music embodies the hybrid sensibilities cultivated by the quartet. “I was raised in a family in which my parents told me of the ‘four B’s’: Bach, Beethoven, Brahms, and Brubeck,” Cohen notes. “I heard the music of Dave Brubeck alongside all of the wonderful and iconic classical composers ... [but] I had always wondered why there were no arrangements or compositions of this type for chamber music ensembles. I felt that if I could hear it in my head, I could play it on my violin, so I started to arrange Brubeck’s pieces for the string quartet. Brubeck’s classical training combined with his American jazz sensibilities made his music a natural choice.”

QSF’s genre-defying approach has led to widespread recognition on both jazz and classical airwaves, though the ensemble is particularly delighted to perform under the aegis of San Francisco Performances. “Recognition at home is perhaps the most satisfying part of the group’s rise over the last few years,” says Cohen. “As we are now reaching national and international audiences, we are most pleased and excited to be embraced and recognized by our own hometown presenting organization.”

As for where QSF will go next, Cohen says that’s a matter of ongoing discussion among the quartet’s members. “We can’t really pursue a new area of music without everyone being signed on for the journey. With Quartet San Francisco it’s 110 percent commitment for everything we play. We have not found any other way to do it right, and frankly I believe that most of our success has come from this attitude (combined with some old-fashioned hard work!).”