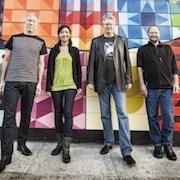 Preverbal childhood and Kronos Festival 2018 have something in common in that they represent periods in time when certain words are knocked out of the lexicon. After all, aside from the expected structure of a typical infant’s development or a string quartet’s classical music training, unbelievable phenomena occur daily, even hourly. Under those contexts, what value exists in words like “predictable” or “unusual”?

A prompt to speak about the Kronos Performing Arts Association’s fourth annual festival that is addressed to multi-instrumentalist David Coulter therefore creates a roadblock. “Describe a few formulaic or predictable ways your role as artist-in-residence has manifested itself — and one or two unique or unusual aspects of your collaboration with Kronos.”

Coulter strives to answer for an admirable if uncomfortable few minutes. After twisting adroitly like an Olympic diver encountering a wrestling opponent on a 10-meter board, he abandons the quest and dives for truth. “Honestly, this is my first time as artist-in-residence with Kronos. I’ve nothing to compare it to. I can say that David (Harrington) has graciously allowed me to take radical curves.”

Coulter is widely recognized as a musician, director, educator, and composer of works involving multimedia and a bevy of instruments like the saw, ukulele, didgeridoo, banjo, fiddle, and recently, the tuba.

“Three nights ago, I was playing on Surfers’ Paradise Beach in Australia. I was performing traditional songs from an Australian songbook but because I was performing for the first time since 1984 with my didgeridoo teacher, I didn’t want to play that instrument. I applied all the weird tongue and breath control of didgeridoo, but instead of playing on a log of wood hollowed out by termites, I played on an expensive piece of brass, a tuba. It’s a different physicality. You know what? A tuba is so colossally heavy.”

In contrast, the mindset and program for the festival — and most of Coulter’s multi-decade career that includes projects with Tom Waits, Robert Wilson, The Pogues, San Francisco’s A.C.T., Yoko Ono, Laurie Anderson, Beck, and more — is lofty.

“The score for Thousand Suns,” [the play is based on the book by Afghan-American author Khaled Hosseini] I rewrote in the language Kronos plays,” says Coulter. “You think, ‘what would happen if? What if we move the bell sound? What if we move from zone to zone to play different instruments?’ Spatially, visually, instrumentally, I love the fact that they always surprise me.”

One concert in the festival involves musical conversations stimulated by words gathered from recent musings, the daily newspaper, overheard conversations, or input from collaborating musicians on the program. Improvisation is Coulter’s primary vocabulary, he insists. “Context dictates everything. The syntax and phrasing depend on that. For a group of 10-year-old kids, the music might be similar as it is for adults, but it comes out as storytelling. I try to tell stories with the music.”

Because he is largely self-taught, Coulter’s performance rituals and philosophies have grown like vines seeking multiple sources of sunlight. His rock and roll background might cause him to squeeze new sounds out a conventional instrument; appreciation for silence expands time definitions—allegro, adagio, ritard are fluid; and “dots on a page” (notes in a score) are not the thrust of his language. “What I like most is entering a challenging conversation. That’s what playing with Kronos has always done for me because we come from such different worlds. As David points out, a lot of people they work with don’t read music. They embrace everyone who resonates.”

Which circles back to the diving board metaphor and wrestling to define a platform that constantly morphs but stands on the string quartet’s sturdy, 40-year history, not to mention centuries of classical music. Two examples in combination illustrate the flux: Kronos will in one program toss aside their string instruments entirely to blow in wine bottles; singer/songwriter Holland once lived in the Bay Area and worked at Howard’s Cafe on 9th and Irving, where she served food and drinks to the quartet during the business meetings they held at that location in the early days. “Now, she’s Tom Wait’s favorite singer and they are Kronos. All these years later, they meet in a different context,” says Coulter.

Context is everything because it means anything can happen. Unusual is usual. That says it all for Kronos Festival 2018.

The Sonic Visuals of The Green Fog

Green Fog delights the eyes, but the musical highlights were elsewhere.