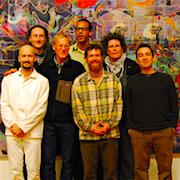 A Relentless Spirit of Inquiry and Innovation Sparks Thingamajigs

The Bay Area has seen generation after generation of musical innovators expand the boundaries of theory and practice through experimentation, collaboration, and a tendency to figure things out for themselves. Maybe it’s due to the area’s cultural diversity, with its commingling of musical languages and further distance from the European establishment. Maybe it’s just another aspect of the pioneer spirit, drawing those on “the wayward trail” toward a place where new work can be done, and shared.

This working tradition reaches back to the modernist theoretical frameworks of Charles Seeger and Henry Cowell; to Lou Harrison and John Cage, who were presenting astonishing and wildly successful all-percussion concerts in San Francisco before there was even the notion of a classical percussion concert; to Harry Partch, who dreamt and built a fantastic instrumentarium in Carmel and Sausalito, before wandering elsewhere; through the electronic exuberance of Morton Subotnick, Ramon Sender, and Pauline Oliveros (among others) at the Tape Music Center in the 1960s; and to the computer music experiments of Stanford’s CCRMA and Mills’s CCM in the ’70s and ’80s.

In the late 1990s another group began its activities. Edward Schocker and Dylan Bolles, then students at Mills College, founded a forum for composers and performers operating outside of the musical mainstream; in 1998 they presented the first Festival of Music for People and Thingamajigs, and eventually incorporated as Thingamajigs, a 501(c)(3) nonprofit that includes summer camps and after-school programs (a.k.a. Thingamakids!), a performance group, and a range of commissioning and artist grant programs.

This year’s edition marks the 20th anniversary of the festival, articulated in performances from December 2017 to May 2018. An performance on April 15 highlighted the group’s Pacific Exchange program, which focuses on collaborations between musicians from across the Pacific Rim, featuring Sophia Shen (pipa) and Cornelius Boots (shakuhachi). Later in May the festival will conclude with concerts by composer Joo Won Park, and the Thingamajigs Performance Group.

I asked founder and director Edward Schocker to look back on 20-plus year of activities and pick some favorite memories, which proved no easy task, as the group’s multiple identities resulted in numerous success stories. Some date back all the way to the beginning, as when composer Lou Harrison and his partner Bill Colvig attended the very first festivals. “Lou was an early supporter of my music and what I was doing. I let him know that I was coordinating this festival but didn’t know the exact date at the time. As we got closer to the festival, I was nervous to let Lou know that it was happening because I wasn’t confident it was going to be good — being the first time we ever did anything like this. Somehow, he found out the date of the concert and had one of his assistants drive him and Bill all the way up from Aptos to attend. At the end, he had nothing but praise and said that it reminded him of the old concerts that he and John Cage used to put on.”

As Thingamajigs developed over the years, it gained increasing recognition and support from Bay Area grantors and media organization — sometimes to an unexpected extent. “In 2004 we were featured on KQED’s Forum. After the show, we got tons of people attending that year’s festival. I remember Dylan and I trying to find enough chairs for all these new people who would have never come to our concerts before. The festival that year featured Carla Kihlstedt, Walter Kitundu, Mobius Operandi, and Bart Hopkin. It was such a standout lineup.”

Another treasured memory was a collaboration with the late composer Pauline Oliveros, whose Deep Listening aesthetics form an important component of the Thingamajigs ethos. Schocker remembers that some people pushed for Oliveros to perform alongside the group, but she was reticent: “She told me that she really loved that we asked her to be the ‘composer/director’ for this project. Apparently, this was a rare thing for her as most people would usually ask her to perform or improvise. It was so great to watch her direct us as we developed the piece over a week in the amazing, resonant acoustics of the old Berkeley Art Museum. We have an incredible recording of the piece that we hope to release someday.”

Today Thingamajigs finds itself in the somewhat ironic position of being a little bit of an it thing, as the increasingly mainstream popularity of the maker and DIY movements (Burning Man, anyone?) expands their audience to people who may not necessarily be connected to the world of experimental music. “When Thingamajigs was just starting it was still quite unusual to be working with made/found instruments and alternate tuning systems. Since then, everyone knows about Maker Fair, Burning Man, Tech Shop, and the countless maker-centric education camps we have here in the Bay Area. I mean, we are working with 6- to 12-year-olds on the same ideas and philosophies that Cage, Harrison, and Oliveros introduced in some of their most controversial writings. Just this month, we have 5-year-old students doing Deep Listening exercises, and we have a group of 7-to-12-year-olds devising 7-limit just intonation tunings for a hybrid birdhouse/wind chime of their own design. I think that’s enough to even make Harry Partch crack a smile!”

In the future, things will change for Thingamajigs as well. Schocker noted that 20 editions of the festival feel like a nice round number, and this year will be the final iteration of that endeavor. Starting next year, the organization will focus on collaborations with artists resulting in new works, alongside continuing their performance, educational, and community-oriented activities. The decision stems, in part, from artistic reasons: “In the festival setting, we pack a lot of artists and performers into multiple concerts, and the works featured are usually allowed to last up to 30 minutes. Sometimes the artist might spend most of their time developing their instrument or tuning and not have enough time to really concentrate on the actual composition or improvisation that they are presenting. Now that being a “maker” is so ingrained in our society, we want to push ourselves and fellow artists to offer performances that aren’t merely saying ‘here’s my unique instrument or tuning,’ but that really go deeper and perhaps carry a deeper meaning or impact for our community.”

Whatever the setting, you can count on Thingamajigs to keep vibrating the Bay Area’s air for a long while.

All events, concerts, and activities of the 20th Annual Music for People & Thingamajigs Festival were made possible through the support of California Arts Council, New Music USA, Zellerbach Family Foundation, and generous donations by individuals across the Bay Area.

For these experimental-music pioneers, new music is about ideas, not a collection of electronic gizmos.