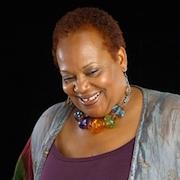 At jazz vocalist Rhonda Benin’s sixth-annual “Just Like A Woman” concert March 31 at the Freight & Salvage Coffeehouse in Berkeley, fearless truth-telling will be found in the voices of Bay Area-based women musicians.

From celebrated singer-songwriter/activist Holly Near in a duet with Grammy-nominated vocalist/percussionist/scholar Linda Tillery:

There is hurting in my family
There is sorrow in my town
There is panic in the nation
There is wailing the whole world round
(“I Am Willing“ from Near’s 2006 CD, Show Up)

From Benin: George and Ira Gershwin’s “I Love You Porgy,” rendered in mellifluous tones in the tradition of Nina Simone, whose recording of the song Benin heard during her childhood. “I think it was the first song I ever learned,” she recalls.

In a concert that features women performing one song written or made successful by a woman and a second piece that is an original composition, Benin’s second selection is still up in the air. “You Caught Me by Surprise” is a love song she discovered in an old journal. “I’ve been revisiting my old stuff,” she says. “It’s very cha-cha, nice tune.” Another song, “One Check Down,” was written when finances were hard and she’d been evicted from her home. A funky beat backs up the rise-to-fall message. As check overdrafts grow, Benin “can’t pay rent/all money spent,” and so on, the lyrics go. “It goes lower and lower through losing more and more checks. That’s how you end up homeless.”

Intending to make no social statement other than that Bay Area women musicians are to be celebrated, the concert Benin has produced for six consecutive years is nonetheless provocative. The mix of pioneering and established professional female artists and up-and-coming young musicians is reflective of historic cultural shifts that encompass past strides and stigmas while simultaneously being predictive of future developments, potential, and talent.

Women, the show declares without having to do so specifically, weather change through inner and collective strength but do not wait to demand more change in days and years to come.

Benin says that anytime people “get in the street, put their stuff on the line, risk being in harm’s way,” they are getting real. When, decades ago, Near and Tillery established or joined women’s music record companies, Redwood Records and Olivia Records respectively, they made sure their music and that of other women artists received support. Young women musicians in 2018 who impress her with their knowledge, assertiveness, and skilled self-promotion “keep me and other old folks rolling.”

“Having said that, the rise of women’s music in the Bay Area has to do with Holly and Linda,” says Benin. “Women are second fiddle a lot of the time, so they opened another door that women can walk through. As artists, they’re unafraid to speak the truth.”

Tillery in a separate interview says the seeds of her parents influence lay dormant for years. Exposed to blues during childhood, pulled toward ’60s-era protest songs, R&B, and rock as a teen, Tillery was jolted, after the death of her parents, by a broadcast with opera singers Kathleen Battle and Jesse Norman performing spirituals. “I couldn’t turn away and when the program was over, I said to myself, ‘You’re going to head in that direction. You’re going to learn about that music and where it came from.’”

Tillery has become an expert on African-American roots music. The minutiae of how a vocalist bends a note or a vowel sound is extended so long that an entire story forms between two consonants in a gospel tune, she says, is directly tied to suffering experienced by people of all races and nations. “If it weren’t for the suffering, I don’t know if prison, work, or field songs would exist. They were created to propel workers forward while doing monotonous tasks. It crosses all walks of life.”

“I Am Open,” the song she will perform with Near, she says is simple, hypnotic. “It’s a singalong. It draws people in because the ear can catch it right away. That’s one of the beauties of roots music: accessibility.”

It’s true, beauty is found in connections multiple generations feel to the concert’s offering of traditional and contemporary jazz, blues, gospel, R&B, soul — some of it touched by inflections of rock and hip-hop. Tillery says people often thank her for performing songs they’ve not heard since their childhood. Teenagers act cool, but return later to say, “Oh my, I’m still singing that song you sang.” There’s a collective consciousness, she insists. “This is American music: music of the soil and of the soul.”

In past concerts, Benin has included women artist of color whose music rises from and continues to find root in classical music, mostly violinists and harpists. She’d like to incorporate more Latin musicians in future years. An Indiegogo campaign and ticket holders who purchase extra tickets for donation result in free admission for approximately 40–50 young women each year.

Tillery takes extra pleasure in the youngest audience members. “Getting them to interact will keep this music alive, long after I’m gone. They’re like sponges. They’ll keep old traditions alive and pass it on. That’s how it’s done.”

For more information and tickets, visit the Freight & Salvage website.

60 minutes of heaven from one of the hardest working women on the Bay Area jazz scene.

Deep in the Groove With Keith Terry

Elephants Inspire a New Collaboration Between Ann Carlson and inkBoat

On the Podium With Susanna Mälkki