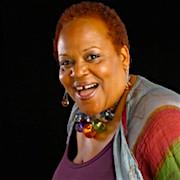 There will be substance, talent, sensuality, sisterhood, love, spirituality, adoration, and eulogizing at Rhonda Benin’s annual “Just Like A Woman” show March 30 at the Freight & Salvage. There will be songs about romance, jealousy, and longing; music of victorious strength and celebration. There will be an equal measure of female fire.

Pianist Tammy Hall, among the show’s featured performers, recalls in a phone interview an encounter with an audience member at a recent festival. “She tapped me on the shoulder and said, “I told my husband you were a woman.” It deeply hurt my feelings. I wear a suit with pants because it’s comfortable and practical. It’s not crossdressing or trying to play like a man or sound like Oscar Peterson. He was a brilliant pianist, but I’m not trying to sound like him. People think it’s a compliment when they tell me that, but it’s not. I sound like me. I’ve been informed by many, many musicians, including Mary Lou Williams, who I believe is underappreciated. Now, men are finally discovering that women actually exist in the music world?”

Hall goes on to say there are exceptional men in the industry and the world in general. But as she reaches her late 50s and becomes more vocal, history has taught her that men often undermine women. Even women sometimes “throw each other under the bus,” or believe they have to be in competition to succeed in a world dominated by men, particularly “Great White Father” figures. “Men are united, especially when it comes to keeping women down,” she says. “Overall, they don’t have a great record on how they treat women. It’s interesting to see conversations around the 2020 election and people who immediately flowed to Joe Biden and Bernie Sanders. The Great White Father coming to the rescue is B.S. Women have always been qualified: we have to dismantle the structure that keeps us from moving forward. We have to have equality.”

By extension, “Just Like a Woman” is designed to balance a ship tilted to favor male composers, band leaders, conductors, and performers. To pay tribute to women in music, Benin, a local vocalist, activist, and educator, has attracted a spectacular lineup of better- and lesser-known artists. Performing a song composed or performed by a woman and an original composition of their own, the concert features Maria Muldaur (“Midnight at the Oasis”); Tia Carroll (“Jolene”) Lady Sunrise, (“Here’s to Life”); Niecey Living Single (“God Bless The Child”), Hall (“For Aretha”), and more.

The bones of Hall’s “For Aretha” came to her “like a strike of lightening.” Upon hearing breaking news of Franklin’s death, she turned to the piano for solace, for a song. “It came to me complete, like she was singing in my ear,” she recalls. The work features Hall on piano, with saxophone played by another featured artist, Kristen Strom. “I have her playing lead line with me some of the time. The drums are played with brushes; the bass is presented lovingly.”

Hall accommodates an interview request, moving to her piano to play a few bars of the piece. Even over a cell phone, there’s no mistaking the easy, bold, bluesy feel of the venerable Aretha coming from the keyboard. Hall says another work she will be performing, “Eyes on You,” is an arrangement by Strom that refers to Mal Waldron’s lush, upbeat ballad, “Soul Eyes,” and has a great samba rhythm. “She’s put her own twist on it. There’s interplay between piano and sax and solos with improvisation.” 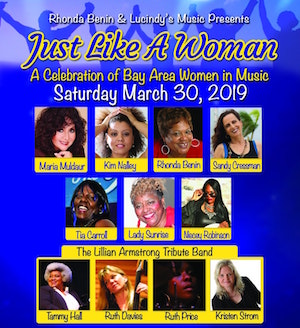 Which gets to the heart of jazz and honestly, the reason Hall — and likely all of the participating musicians — cherish the opportunity to join in Benin’s endeavor. Music education and mentoring the next generation of women musicians of color, Hall says, is about nurturing the whole person; in itself a combination of structured interplay and spontaneity. “I’m part of a new program called Black Girls Play run by Angela Wellman through the Oakland Public Conservatory of Music,” says Hall. The program offers black girls free classes, workshops, and instrumental lessons, largely taught by women of color. “They also learn aspects of sound engineering, management, production, and being professional musicians. Next year, when I’m not touring as much, I plan to be more involved.”

At the concert, Hall is likely to remind people that jazz is about freedom. “It’s not about writing music that’s as complicated as you can write. Sure, it’s about thousands of hours of practice, but there’s an intangible part. It’s about expressing what’s coming through you. That’s how I get to communicate my truth to an audience who wants to listen.”