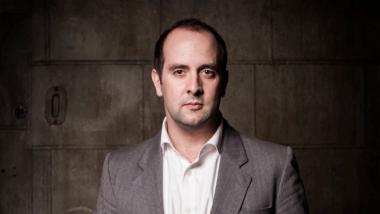 Up River With Opera Parallele’s Heart of Darkness

In a section of a cavernous converted airplane hangar on Alameda is a small studio filled with items at home in a natural history diorama. Shafts of sunlight pour over the modular walls of the studio, where artist Jon Altemus walks past an uncompleted tree trunk and picks up a faux elephant tusk painted mottled gray. "They could be used as a tool," suggests Altemus, handing it to Brian Staufenbiel, creative director of San Francisco's Opera Parallèle

Staufenbiel nods. "As well as the boat," he says, examining the tusk, fashioned from plywood sandwiched between foam shards, adding, "and maybe some of the stations on the river." He is mentally running through his production design for the company's upcoming North American premiere of Heart of Darkness by British composer Tarik O'Regan and librettist Tom Phillips.

The one-act chamber opera received its world premiere at the Royal Opera House in London in 2011 to strong reviews. It's adapted from the Joseph Conrad novella about corrosive evil set against the 19th-century European ivory trade derived from African elephant tusks.

About 70 faux tusks will be created under Altemus' supervision, and audiences will first view them in piles as they enter the lobby of Z Space. The San Francisco Mission District performance venue lobby will also feature a lush equatorial environment created by large fabric hangings printed with reproductions of Matt Kish's illustrations to the 2013 Tin House Books edition of Heart of Darkness.

The creative concept for the lobby, explains Staufenbiel, who is also directing the 75-minute opera, is to immerse the audience immediately into the journey the opera's narrator, Charles Marlow, takes up-river in equatorial Africa to find Kurtz, the enigmatic ivory trader believed to have turned his remote river station into a murderous fiefdom.

"I think what we're doing is enhancing visually the beautiful narrative and helping to tell the story through the fluidity of the projections," says Staufenbiel, seated at a picnic table outside of the airplane hangar, shielding his eyes from the bright March sun as the waters of San Francisco Bay lap nearby.

The Opera Parallèle production resembles Covent Garden's in that most of the narrative takes place on a boat as time shifts back and forth between the past and present: Marlow as an old man on a boat in the Thames River telling the story about his time as a young man sailing up a Central African river.

Where Staufenbiel's conception primarily diverges from the London production is that scenes with the older Marlow on the Thames are in black and white. Projections and technologies create the special effect. "It will help the audience follow the fast-moving time shifts," he says, of his Wizard of Oz-type of storytelling solution to keeping track of chronology.

What's more, the audience in Z Space will be arranged in three sections in the form of an open bracket. Those seated in the two areas flanking the the boat-shaped stage will don ponchos onto which light and digital images will be projected at different times during the performance.

"It will create a very fluid animated effect, with layers of motion," says Staufenbiel. "They're submerged in this light, from the top down; it isn't blinding them. They're going to have a more intimate feeling of being on the river."

In front of the center bank of seats will be an orchestra of 14 conducted by Nicole Paiement, the company's French-Canadian artistic director and founder, who is also principal guest conductor for the Dallas Opera.

The Grammy-nominated O'Regan composed the opera, his first, for 8-12 singers with some roles that can be double cast. The San Francisco performances will feature Isaiah Bell as Marlow and Philip Skinner as Kurtz, with Heidi Moss, Daniel Cilli, Jonathan Smucker, Aleksey Bogdanov, Michael Belle, Shawnette Sulker, and Thomas Glenn rounding out the cast.

Paiement, a champion of contemporary chamber opera, was attracted to Heart of Darkness by O'Regan's music and Phillips' tight libretto, which takes its sparse text from the novella and Conrad's "Congo Diary."

Music critics writing about O'Regan, whose mother is Algerian and father English, have noted a cross-pollination of American, European, and North African musical influences and rhythms in his work."I'm always seeking composers with a unique voice. Tarik is very much of his sound world … his way of combining African sounds in a synthesis with lyrical English sounds. The whole orchestra together almost becomes a percussive drum at times." - Nicole Paiement

"I'm always seeking composers with a unique voice," says Paiement, in a telephone interview from her office in early April. "Tarik is very much of his sound world … his way of combining African sounds in a synthesis with lyrical, English sounds. The whole orchestra together almost becomes a percussive drum at times."

The opera, according to Paiement, is not easy for singers. "The lines, as lyrical as they can sound, are difficult … the meters are complex," she says. "Once they learn that complexity, then they can sing them lyrically. His writing style is very much as in Britten's sound world … the coloring. It's a voice type that's light. I needed to have the kinds of voices with that coloring, that agility; a combination of head and chest voice."

O'Regan's operatic adaptation shifts the dramatic focus of the novella toward the nature of storytelling and the question of complicity when secrets are preserved.

The initial idea of turning the Conrad novella into an opera stemmed from O'Regan's viewing of the 2001 Redux version of Apocalypse Now, the 1979 film adaptation of the novella directed by Francis Ford Coppola.

O'Regan subsequently learned from a magazine interview with Coppola that Orson Welles had written a script based on the classic but was unsuccessful in getting a studio to greenlight its production. The 1938 radio play of "Heart of Darkness" that Welles wrote for his Mercury Theatre, however, survived as well as the broadcast itself.

Once O'Regan saw that Conrad's dense and complex work could be distilled as Welles had done with his economical radio script, the composer knew the novel could be an opera.

Welles' radio play was set somewhere in equatorial Africa. "You can't tell what year it is," says O'Regan, who will attend the opera's North American premiere on May 1. "What you get from Welles is focus on character, and that's what you need for opera. It's a timeless story; you could set it in space."

More has been written about Heart of Darkness than the novella's nearly 40,000 words. O'Regan notes the novel has gone through many critical readings with diverging results, ranging from Nigerian writer Chinua Achebe's charges of racism to the suggestion by Adam Hochschild, the San Francisco author of King Leopold's Ghost, that the novel could be a form of non-fiction.

"We oversimplify narratives ... .and lose the narrative of the people we're talking about," says O'Regan.  "There's a colossal amount of understanding that's missing. When we look at postcolonial Africa, it's not good enough to look at that very diverse continent and its diversity of people, and say 'oh, colonialism was bad.' That's a simplistic reading of a very complicated period.

"You see different sides of that period. That's why I was in interested in Marlow. … I think he has many identities as a character," says O'Regan, whose parents were each born in a colonial setting: his mother in French-occupied Algeria and his English father in British-administered Ceylon. "I have a sense of hybridity, but I'm quite at home with it."

In distilling Conrad's dense narrative to create the opera, navigation in the tale represents Marlow's river boat journey, as well as a metaphor for not telling the truth about his experiences on the voyage. The double navigation is central to the opera's dramatic arc, according to O'Regan.

"I'm not so much interested in the Africa-Europe story as I'm interested in the human story. The focus of the opera is on this need to confess," he says. "When Marlow is an old man on the boat on the Thames, and he's telling stories, they're [his audience] complicit in hearing the stories. The complicitness of it very much drives points in the opera.

"When he's asked about Kurtz' last words, he lies," says O'Regan, referring to Marlow telling Kurtz' fiancée that her name was spoken instead of revealing the tyrant's final whisper: “The horror! The horror!”

"It's such a small lie … but with huge consequences. I'm much more interested in why he lies and why he tells us, the audience, that he lies than the lie itself."